It was my 7th Rez Day yesterday and i waited all day for my special email from the Lab wishing me happy rez day.

But as the clock struck 12am the next day i went o bed a little disappointed. Strangely though i woke this morning to find in my inbox a message from the lab with a link to a birthday cake. Technically it was still my rez day in SLtime :-p 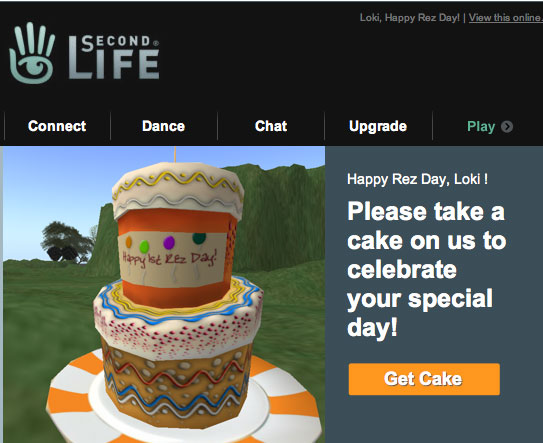 So 7 years i’ve been invested in SL. I think i’ve seen it all when it comes to Second Life. From Shrinking in world economies to a growing marketplace, being buried under the hype of virtual worlds then watched it burst like a big puss filled zit. Saw the corporate world come make a fuss then leave. Saw Linden Lab grow try to go down corporate conference route, then pop.

I’ve seen my friends get excited, build things, invest lots of money, then get burned by price hikes, product reshuffles , then get bored and drop out or dream of the old days.

Saw an entire community backlash to a User Interface apparently created with the user base in mind, leading to the rise in Third Party Viewers that fragmented what people see and do.

Worst of all i’ve seen people who were great friends suddenly turn on each other forcing each other out of SL because of misunderstanding, intolerance, disrespect.

But Second Life is still here, even when the biggest doomsayers are saying its all about to collapse, thats just their version of SL has simply changed to one they don’t recognise anymore. As far as i can tell SL is still expanding, maybe not in virtual land mass, or new users, but in ideas created by it’s users and the Lab.

I think sometimes because the Lab is SOOOOOO SLOOOOOWWWWWWW at releasing new features we kind of take them for granted before they are officially finished (some might argue no Linden Lab feature is finished.).

Anyway thanks everyone who sent me Rez Day messages on SL feed. I wonder what i will look like this time next year?