I like playing the guessing game with Second Life’s future. A lot of people do.

When LL bought Avatars United, i tried to guess how they might use the tech with SL. Yeh didn’t work out how i thought, but still we got SLfeed and i can’t live without that now. 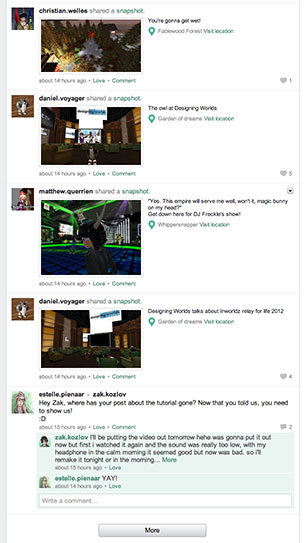 SLfeed, Planned or an accident?

SLfeed is an interesting addition for Second Life, i don’t know wether they intended for SLfeed to be how it is or not. The implementation of snapshots I’m pretty sure came about from someone saying ‘Hey LL, why not make it so we can haz snapshots in our feedz’. Now it’s likely one of the most used and popular features. I use it to promote new shops, i use it to document adventures, i use it to announce events, i use it to share things i find interesting and i use it to show how much fun I’m having with friends. I’m pretty Sure Linden Lab did not expect that. It would be interesting to see how many snapshots a day are posted to SLfeed. I do miss the fun statistics of SL.

Some people still do not use SLfeed or worst don’t even know it exists. (Some people only know SL feed and are oblivious of the actual 3D world of Second life).

When first released, i had reservations on how useful it would be. It’s basically a web service disconnected from the 3D spaces of SL but all that changed as soon as Snapshots became publishable from in SL. For me it truly changed things for the better, but why it’s stopped at snapshot’s i don’t know.

To me it would make sense to tie other Sl related activity into SLfeed. For example why can i only comment on Destination guide using Facebook account (WTF!?),  that should be linked to SLfeed. Why is there no SLfeed button on Marketplace products?

When Avatars United was bought by LL, Second Life users rushed to create group pages which in the end got deleted when AU was removed from existence. This showed how much the user base wanted better group options, Avatars United was a breath of fresh group air. Unfortunately everyone had to go back to the old groups which haven’t changed in years.

SLfeed gives an opportunity to breath fresh options into groups. I’ve discussed with friends how simply having an SLfeed Group Page could breath life back into group activities. An idea to add an option to tag a snapshot or post with a group you are in. You could then pool your snapshots to Group Pages. So i could look at all the posts related to My Escapades Group, then go to the New Babbage SL Feed Group Page and see all the snapshots and messages related to that group. Add to this the ability for notifications to appear in the SLfeed group pages and suddenly you have a much easier way to keep up to speed with whats going on in groups.

Without realising it, we have a section of Second Life that could be classed as mobile. SLfeed gives users the ability to communicate, buy and organise their second lives on the go. It just all seems terribly untidy at the moment. May be the Marketplace team arn’t in the same room as the destination guide people or the SLfeed people and thats why integration between them all seems elusive.

If LL were ever to evolve a synergy between SLfeed and the other features in SL, then it would only be a small stretch to expect a native mobile App dedicated to organising your second life. Instead of a page for destination guide, page for SLfeed, page for marketplace (and a page maybe for groups) it could all be incorporated into a mobile app.

Lots has been said about making the actual Grid of Second Life mobile, and some have even started to achieve it in some degrees. But it is generally believed that achieving the Second Life Grid on a mobile device impossible especially when its difficult to get it running even on high end Computers.

If LL were going to make SL for the mobile market it’s probably more likely they would have to create a new grid specifically designed to be on mobile. Is this such a bad idea? The first thought that came to my mind was the reluctance of having to make a new Virtual identity for a totally new mobile 3D world. But we might not have to do that seeing as our Second Life identity is pretty much separated from SL main grid now. It could be possible for our SL identities to share Virtual Spaces, and in a way we already do this when we organise to help Linden Lab on the Beta Grid.

I must point out at this stage that all that i have written is speculation and thoughts i’ve had. I want just as much as every positive thinking SL user for Second Life and Linden Lab to keep evolving and growing.

7 thoughts on “What would a mobile Second Life be?”