We’ve seen Linden Realms with it’s auto teleporting abilities, it’s auto attaching temp HUDs that remember your last score. We’ve been crushed by giant rocks that wandered around then chased us and caused us to be auto teleported to a re-spawn point….

Almost a year later i still can’t reproduce this on own island. But I’ve been trying.

I decided to use what i had learnt from SL9B using HUDS to tell a story and create a small adventure quest that would use new tools that had arrived this year.

Someone has eaten all the cheese and you need to find the culprit. The story is uncovered by clicking things which trigger the HUD to show encounter bubbles similar to what you find in RPG games and can include music and gifts all in the HUD. The potential is for an entire RPG story being stored in a HUD.

Most of this was just refining what i had learnt before with New Babbage Mystery and SL9B. But this time i learnt an extra trick to do with ‘lists’. Thanks to the kind people on the SL forums i learnt how to make a lists database so when someone clicks and object to get a message, if they click a second time it remembers the user and shows a different message. This can be seen if you click the Cheese fairy a second time. 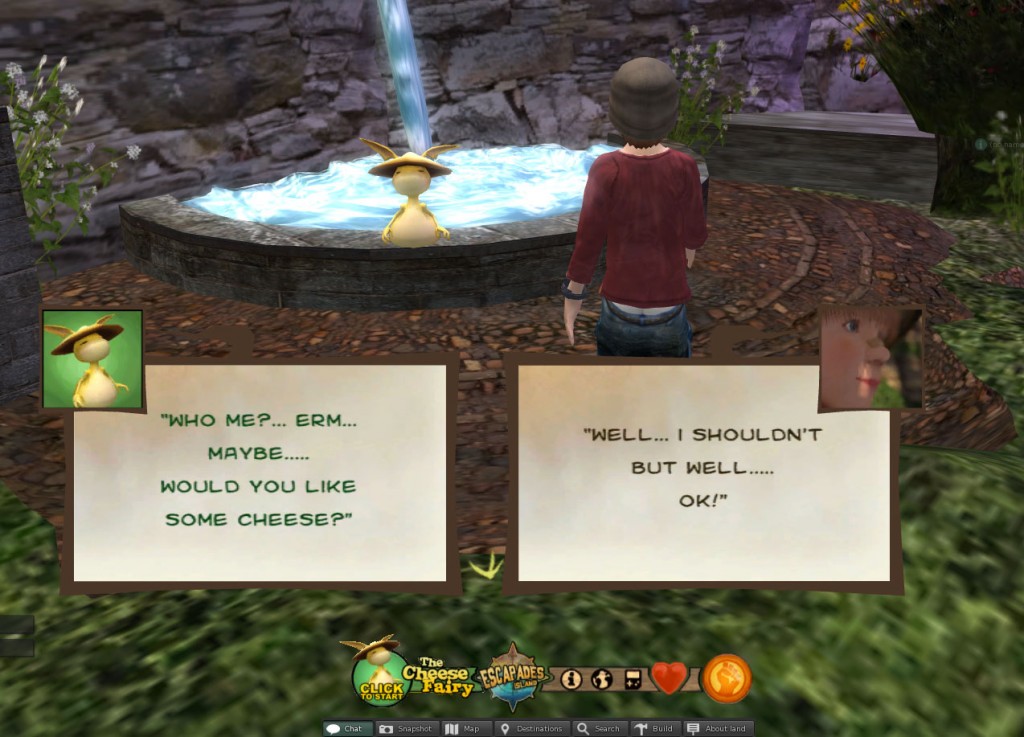 Along with learning ‘Lists’ i also wanted to try some new stuff such as the Creator tools & Pathfinding.

The new Tools were originally referred to as the ‘Gaming’ tools when first announced by Rodvik, since then they changed to ‘Experience’ Tools and then to ‘creator’ Tools. I’ve started to refer to them as the ‘The Grail’ tools. I know they are coming, they will be released when its right. Linden Lab did release two parts of the Grail Tools, ‘AttachAvatarTemp’ and ‘TeleportAgent’.

AttachAvatarTemp – This allows you to touch an object and have it auto attach itself to your avatar and because it is ‘Temp’ it will not be added to your inventory. It’s quite kool actually and really reduces the amount of faffing about needed to play some games. Usually you have to Click something, receive it, open inventory, find it in inventory then right click and wear it. With this new tool you click, it rezzes item and you click and it’s attached.

Only issue is with permissions, they really are a pain in the ass and ill get back to that later. You also can’t use TeleportAgent with a TempAttached object.

I used AttachAvatarTemp with there Cheese Fairy HUD, so its simple to attach and get on with the adventure. Then after you remove the HUD and it’s added nothing to your inventory.

TeleportAgent – This allows you to click an object, or collide with an object and get instantly teleported ZOOOP!. AMAZING i hear you not cry, well it would be amazing if i could use it how i wanted. I tried to get it so the Quest HUD teleported you to a starting point when you clicked ‘START’. But due to permissions restrictions only the owner of the object can be teleported. Thats fine, because when you TempAttach the HUD you become the owner of the HUD. Well Linden Lab must have thought about it because the’ve made it so you can’t request Teleport permissions from a Temp Attached item. MEH.

With the help of my friend David we did try some work arounds where the hud rezzed temp objects inside the avatar which on collision sent a teleport request before deleting itself. This does work but causes a dialogue box to appear every time requesting permissions. I found this to be really annoying so decided to drop the TeleportAgent feature from the HUD.

When it comes to a fun experience the mechanism, the part that does all the work telling the story and pushing the user further into the experience needs to be as simple as possible. it needs to almost not be there. The user must not have to stop and work out a technical issue before returning to the experience and they should not have to click ‘request permissions’ boxes all the time.

The biggest of the Grail Tools yet to be released, or even mentioned in more detail is the fabled ‘universal permissions’. This is a set of permission you give a region owner allowing any item that calls for them to have permission to use you on the region you accepted them on. This would allow you to be teleported instantly, or have objects attached to you. It might even allow the region to animate you, or to control you. Used by the right sort of people these sorts of perms could lead to some truly amazing experiences in SL like nothing we’ve seen yet.. on the grid. Used by the wrong people and you could end up having a giant penis attached to your forehead. So with concerns like that i can imagine they would want make real sure the ‘Universal Permission’ system can’t be abused.

It would be nice to hear something about ‘Universal Permission’ some time to remind me i didn’t just dream them.

A feature switched on by scripting a character into an object. The script can give the object abilities such as pursuing, wandering, and evading. To accomplish this Linden Lab had to program a completely new way for land to be constructed, but you won’t see it because it’s invisible to normal users.

Seeing as i would be making a little Cheese Fairy character i decided to try and make it Pathfinding so it would be walking around when you found it. People who saw the Fairy waddling about said it was really cute. They found themselves connecting to it more as a character rather than a static statue which is a really important thing when trying to get users immersed in a story. 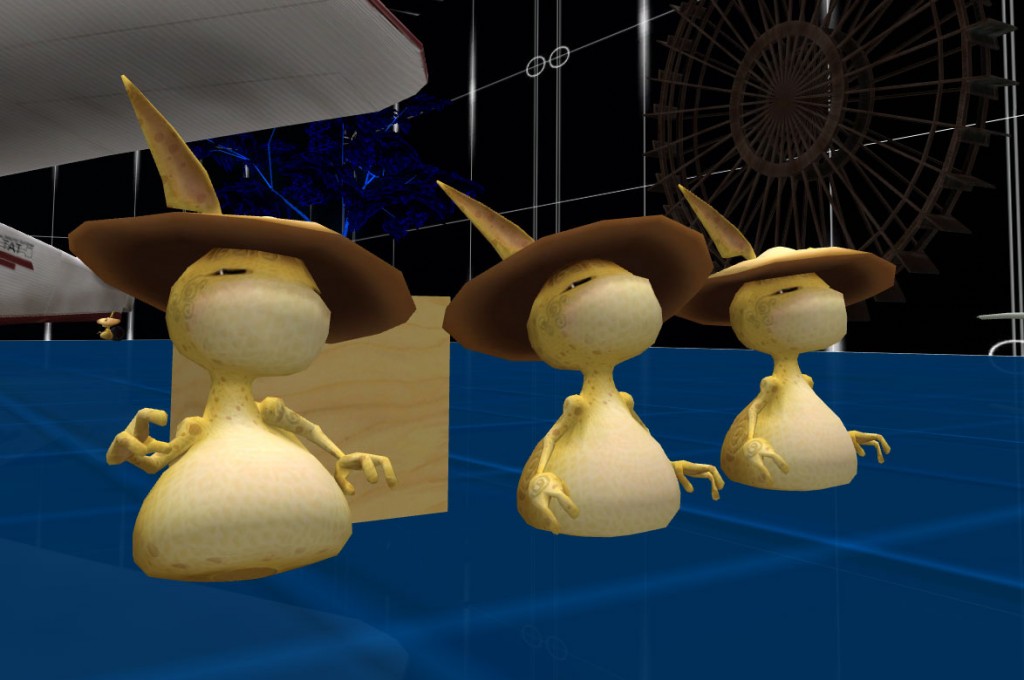 Unfortunately there was some sort of bug that causes the alpha flipping to not work as it should. I filed a bug report and Linden Lab are looking into it. Also every Pathfinding character is automatically 15 land impact even if it was originally 1 land impact. I guess thats just how much resources a pathfinder objects takes. Also you can’t touch activate a pathfinder object, but this can be worked around by linking another object to it which CAN be touched. All this did not stop me from continuing with trying to script the Cheese fairy. What did stop me was my lack of scripting skill.

I could script the Fairy to trigger all the story elements of the quest HUD and i could script the multi-state pathfinding. But when it came to merging the two together so he wandered about then stopped when clicked to talk to the user, this i just could not work out and as yet there is no working references online to research from. I’ve not given up, its something ill have to learn at a later date. So for now the Cheese Fairy just nods his head while sat on a wall.

Pathfinding is an extremely complex feature added to SL, i think it’ll be a while before we see it’s true potential, but its something i think will add some really exciting new ideas.

Making this small Quest game has helped me learn a few things while confirming better ways of using HUDs. It has shown me the current limitations of of some new features and the possible future if Universal Permissions ever appear.

The Cheese Fairy Game is available AT NEMO BEACH. If you play the game you can then wonder like i am how well it might work with a story that goes beyond ‘who stole the cheese’.