There is a new term that i am starting to use to describe time in Second Life, ‘Before Escapades’ and After ‘Goony Island’. For four years starting from Sunrise Sim with Anshichung, to then Goony Island on a homestead so much had happened. Then we upgraded to Escapades Island full sim and everything changed in SL with new viewers, Mesh changes at the LAB, new CEO’s. So in a way before Escapades is the old Second Life, and after Escapades i see it as the New Second Life.

Over the weekend we celebrated the second anniversary since the upgrade from a homestead to a full region and the renaming from ‘Goony’ to ‘Escapades’. Last year the festivities were simply a celebration of surviving the first year what with the tier being so high and rentals being so low. If it were not for the islands supporters and generous donations it most likely would have fallen through.

This year i can look back with a cheeky grin. Not only are we almost at full rental capacity my Mesh shop business is doing great and this has allowed me the comfortability steam ahead rebuilding stuff in Mesh, learning more scripting and modelling. All this of course means more exciting crazy stuff on the island later this year.

As for the Anniversary weekend, as we did last year we held events on Friday, saturday and sunday so fans of Escapades Island could at least attend one of the events.

1. Special Goonies adventure to a haunted hospital. We did try to go to another haunted house but that was so lagged out due to being on destination guide, we decided to try this other place. “DADDY LONG LEGS AND DEAD THINGS MIKEY, DEAD THINGS!”

2. The Founders Tea Party. Last year it was a theme based on mad hatters tea party. This year it was based on the Wizard of Oz.

1. Started off with a Mini Tug Boat Race. Was surprised with how many people turned up to this and it was hilarious fun watch.

2. Pirate Party. My Brother Gemini Enfield took to the decks in the John King Tavern playing spiffing pirate rock while us delinquents through chairs at each other and danced on tables.

3. Pirate Ship Battle. The Grand Masters Obedient servant Glorb (an NPC character on Escapades) challenged the young pirates to a ship battle. Of course Glorb was the looser.

1. Beach Party. Started the evening with a beach party but the Cliffside Cabins playing Ska Punk and teenage rock. High point was seeing a unicorn go down the curly whirly water slide, something you’d only see in Second Life. 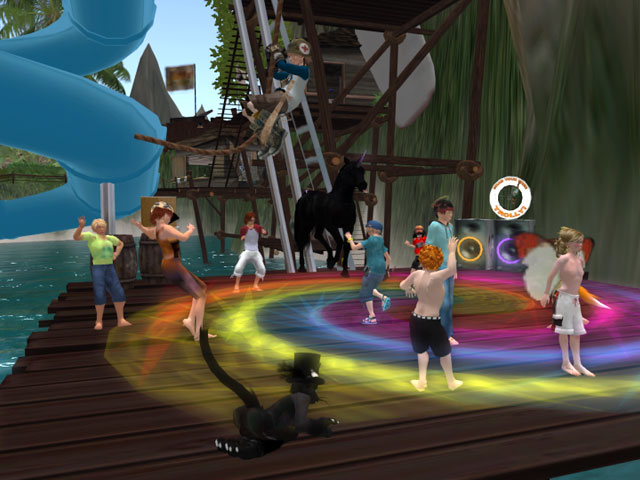 2. Trolly Race. Following the Beach party was the Steam Powered Shopping Trolly Race. Couples raced each other in Shopping trolleys around rickety Town centre for the Escapades Trophies. The lead changed hands three or four times before the Girls won.

3. THE MEGA BRAWL. The final event of the weekend was a massive Mega Brawl in which i razzed what ever bad guys and monsters i could find in my inventory for the gang to defend from. This is usually a game off who can last the longest before they crash or the sim crashes. I rezzed Bugs, Goblins, Gelatinous Cubes, Daleks, Lizardmen, Head Crabs, Zombies, Worms, Zombie worms, Rats, Wasps and evil pooping pigeons. so thats a total of 12 different monsters some times up to 50 monsters battling it out and did the sim crash? Nope, infact people were surprised how well it all performed. So this is a sign of the improved performance over the last year not only from using mesh, but also from Linden Labs continued work.

All in all it was a great weekend, fun and full of laughs. I got to see some old faces id not seen in a while and got to know new faces better. Here’s to a 3rd year of Escapades!

You can see highlight from all these events in this 18 minute machinima… enjoy!

If you get a ‘Sign in with evil Facebook to watch video‘ banner, dont panic as you dont have to, just go to this link