Its rare that i find time to go an play with friends in SL.

As part of a Surprise Flashpoint event that kinda didn’t work, i discovered ‘Axis of Evil‘ when logging into SL. It’s being promoted on the Destination guide so with my own experiences with being on login Destination guide i wanted to see how well it was performing.

So i thought, just turning up as a kid would be inappropriate so i got myself an awesome weapon and helmet from Deco on marketplace, bloodied up my shirt and headed over looking BADASS. Upon arriving i got an IM telling me i was to heavy with scripted attachments. Turned out my shoes were full of scripts so i went back on Marketplace and bought some heavy boots from Loki Dancer. 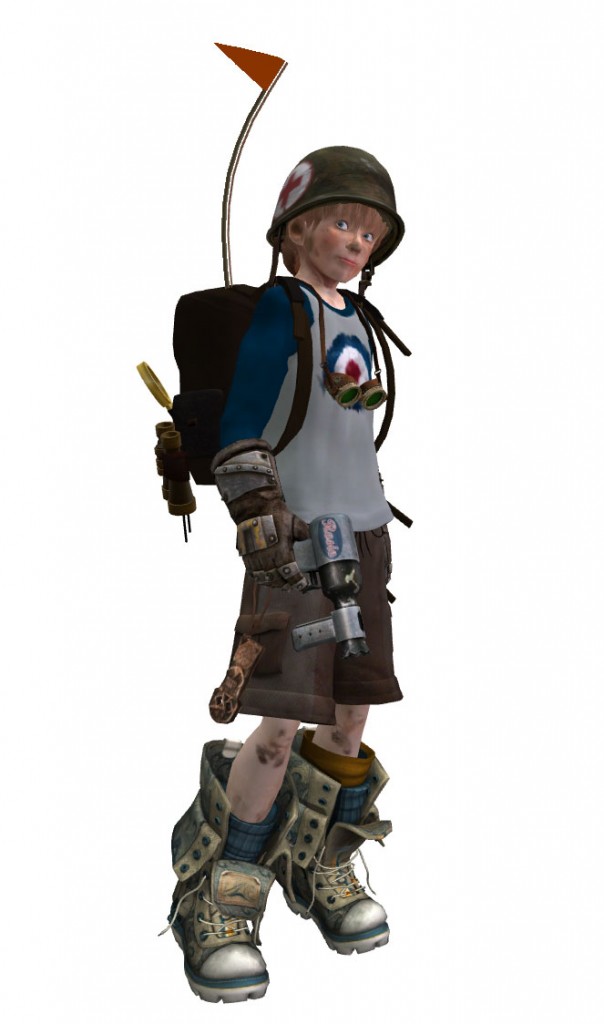 Now a fully armed and operation BADASS kid, i got my Goony brothers together and we went to try out Axis of Evil.

You start off in a welcome area with an almost Glados style voice telling you to grab a HUD and not to spam. Then it’s a brief practice to make sure your weapons effect the zombies before heading off down the tunnels.

Performance wise it was better when i went on my own. Having a group of people all shooting weapons quickly caused the Zombies to slow right down, registering hits sometimes minutes after. Contrary to this overall frame rate was great there demonstrating the varying levels of Script performance VS Display performance.

It made me wonder if pathfinding, removing animated prims would make any improvements.

I was pointed out that the Axis Of Evil sim is actually a Homestead and while in the past it has been said that Homesteads have specific Script limitations, i’ve found no official statement on this. But as someone who upgraded a homestead to a full region, i did see a noticeable difference in over all performance. Perhaps this is due to Homesteads sharing with more regions than a Full sim. I don’t know for sure as there is nothing definitively written about it form the Lab as far as i know.

From my own observations i could see areas that things could be improved. Having animated prims is so 2011 :-p. It’s always great to see how others do things and i picked up a few inspirations for my own island.

Overall we had a lots of fun and i can see myself kitting up to shoot more zombies in future.

1 thought on “Goonies VS Zombies – Visiting Axis of Evil #sL”