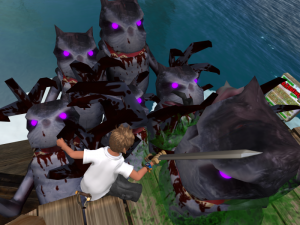 New Features in Facebook arrive so suddenly that the first you’ll probably hear about it is from Tech Blogs such as Techcrunch or Mashable where they report the fury from users who have their contacts sucked out of their address books. Linden Lab on the other hand announce new features years in advance.

Last year Linden Lab announced new gaming tools coming to Second Life. This year they renamed them Experience Tools and i have just recently been told they are now called ‘CreatorTools’ what ever they are called does not matter, but what they will bring to Second Life regions does.

I have my island, and i have my MESH Goblins and secret underground tunnels of discovery, but there are functions that i am waiting patiently for with the release of the Creator Tools. Pathfinding will allow my monsters to come alive and run about freely instead of just heading to the nearest target. My monsters will be able to damage you and even kill you and instead of sending you home they will auto teleport you to a respawn point on the island. Auto attaching HUDS can appear on your display to help guide you to hidden treasure or monitor your health as you are attacked by goblins. Unlocking secret doors and entering them will be able to auto teleport to the desired destination instead of having to click anything.

So yeh we get to make SL more like a game

But what makes a game a game?

It will be inevitable that creators who first get hands on these new experience tools will emulate current gaming paradigms in order to get to grips with what can be done. Current creators who have already done their best to create combat gaming communities in SL will get a massive boost in interactivity. Eventually however i think we could see creators start to experiment with what a game is.

Im a fan of Peter Molyneux and while i’ve never actually played Black & White or Fable for which he is honoured for, It’s his ideas about games that connect emotionally with people that has caught my imagination. In 2010 Peter demoed a test for ‘Milo‘ a virtual boy who could interact and make an emotional connection with the player. At first i could not grasp how this would work in a game and the media blew it all out of context. Then at TED Peter showed a more visible idea of applied gameplay to Milo and i was blown away.

The main focus with Milo seems to be the Tech, the Ai that allows Milo to interact and change with the player but for me the Tech was simply a device to allow an empathic connection between the player and the game and THIS was what really caught my attention.

Empathy is a defining thing. We judge a films mercilessly by how much we care for the characters being knocked off by alien monsters, yet in a game this is rarely applied. In Second life i have seen countless examples of people empathising with each other. We recognise that we are all individuals with real people and character behind the unique avatars. This is the true power of the Avatar in Virtual Space.

Imagine how awesome it would be if while playing a mainstream MMORPG for a couple of months you discover one of your guild members who you see as a great friend turned out to be a major plot device to the biggest in game story. This happened in Second Life during a steampunk role-play in New Babbage. A group became friends with another player who joined them and became friends, then three months later they discovered that their new friend was actually the key to stopping the entire city from being burnt to the ground. The emotional mind game left the group in shock as they tried to work out what just happened. It was truly a totally new gaming experience to be emotionally torn apart by a game.

The ‘Milo’ game never came to be in the end as Molyneux said in an interview ‘”I just don’t think that this industry is ready for something as emotionally connecting as something like Milo.” and “The real problem with Milo, and this is a problem we had lots of meetings over, was where it would be on the shelves next to all the computer games. It was just the wrong thing. It was the wrong concept for what this industry currently is. Maybe this industry one day won’t be like that, but at this particular time, having a game that celebrates the joy of inspiring something and you feel this connection, this bond; it was the wrong time for that.”

In Second Life the majority of people already have this connection and bond. In New Babbage i created a city wide role-play game and the majority of New Babbage residents got involved as a community. They were emotionally attached to the story and the cities history. But i also tried to bring in outsiders to enjoy the game but they could not experience the same emotional connection to the story.

So who will i be making games for? Everyone and not be able to connect them emotionally, or for a small group who will be so emotionally attached to the experiences as to be unable to sleep due to whats happening to their digital self?

“When all the stimulus [of combat and puzzles] drops away something fills that space and it’s usually the player thinking about stuff, reflecting on stuff. these quiet patches can give a massive boost to the type of emotional complexity that a game can [create].” – Dan Pinchbeck Director of Dear Esther

The gaming industry is changing as more and more experiment with defined rules of what makes a game, and if you are like me looking forward to the possibilities the new tools will open, check out this article on EDGE. With the new Creator Tools Linden Lab have an opportunity to grow Second Life with this area of games experimentation. In a sense Second Life can only grow when the tools allow it.