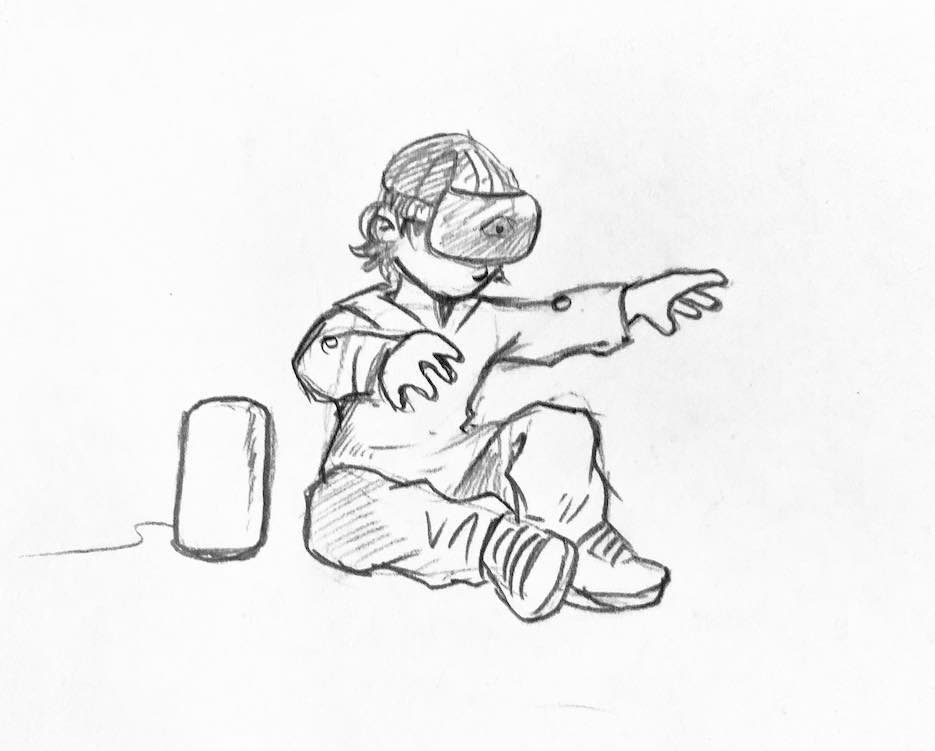 I drew the sketch of a boy wearing a wireless headset back in 2013 when Oculus DK1 was just reaching developers and Apple released the Mac Pro trash can signifying the start of apples slow death in the hearts of the pro creative community.

This is how i imagined the future to be, with a single headset connected to a single Mac Pro and now in 2021 i have pretty much that set up, albeit without the Apple Mac, or the Oculus or the wireless bit.

I had been anti-facebook way before Palmer sold Oculus to them, and my stance against Facebook has only grown since. Some say i’m blinded by my hatred of FB and cant see the benefits Zuckerberg is bringing to the VR Niche. It does not matter since Valve gave me an alternative thankfully. The Index is my current headset of choice with its full finger tracking controllers and combined with SteamVRs Outside in full body tracking.

Because of my bias against Facebook i’m not really able to have a balanced opinion of the Oculus Quest2, but those of my friends who have tried both seem to agree that the Valve Index while expensive and while wired to a PC is still currently their preferred system for VR. The Quest 2 is apparently a good quality entry point for those starting out in VR with its inside out tracking and wireless self contained system while also giving the option to link to a PC for higher end experiences. The Quest2 seems to work well for alot of my friends, i’ll leave it at that lol.

I tried to get VR running on my iMac for a few years in Bootcamped Windows but then reluctantly came to the conclusion that if i want to be serious about VR then i’d have to dump Apple Macs. So January 2020 I decided to purchase my first Windows PC. I occasionally connect it to my LCD TV but mostly use it just with the Valve Index Headset just like in my old sketch.

It’s beginning to feel like we’re reaching a point where VR is in reach of everyone who wants it. The only hurdle now is finding services that actually GET what VR is and what it can offer us.

During 2020 i gradually built up my VR experience with Accessories and enhancements.

I now have a total of five Vive Trackers. Adding one to my hip and another two on each foot some SocialVR platforms such as VRchat, NeosVR and Sansar support full body tracking (some better than others). This allows your legs and body to move naturally in sync with your real body. This not only helps others see you move more real, it helps yourself feel more immersed as you legs and hips move how you feel they should be. The two extra trackers i use for VR mocap where tracking the elbows or knees can provide more accuracy. Vive trackers are quite pricey so i didn’t get them all at once. There is at least one company promising to bring out cheaper alternatives later in 2021.

The Woojer Strap is a haptic accessory that vibrates to the sounds in VR. I got this through a kickstarter campaign and it arrived just in time for a virtual music festival, where it really did add to my experience having the beat of the music gently thump against my chest. There is a full vest version to for a more 3D haptic experience.

I wear glasses and while the Valve Index accommodates glasses wearing well, my glasses did end up damaged from prolonged use and sweating. So i decided to get some Prescription lenses for the Index and after a few initial minutes of eye strain, they seem to be working comfortably well allowing me to get the full field of view the Index is known for. They come in a glasses case and simply slip over the existing Valve Index lenses. VR Optician also supply lenses to most current VR Headsets.

Real highend VR needs a real powerful graphics card. At the end of 2020 both Nvidia and AMD were releasing Graphics Cards finally powerful enough for the demands of high end VR. I managed to get my hands on a GeForce RTX 3070 just before Christmas to help boost my VR experience and going into 2021 i couldn’t feel more ready for what VR has in store. It also heats my studio during winter.

‘How can these Reebok shoes be a VR accessory?’ i hear you ask, ‘Do they use slippy slidey locomotion?’ No, nothin fancy. These retro shoes first designed for the film Aliens in 1986 were recently brought back into production for the Aliens Anniversary. I bought them because i’m an 80s geek but discovered their unique large velcro flip over design accommodated the attachment of Foot Trackers really well. How Ready Player One is that!?