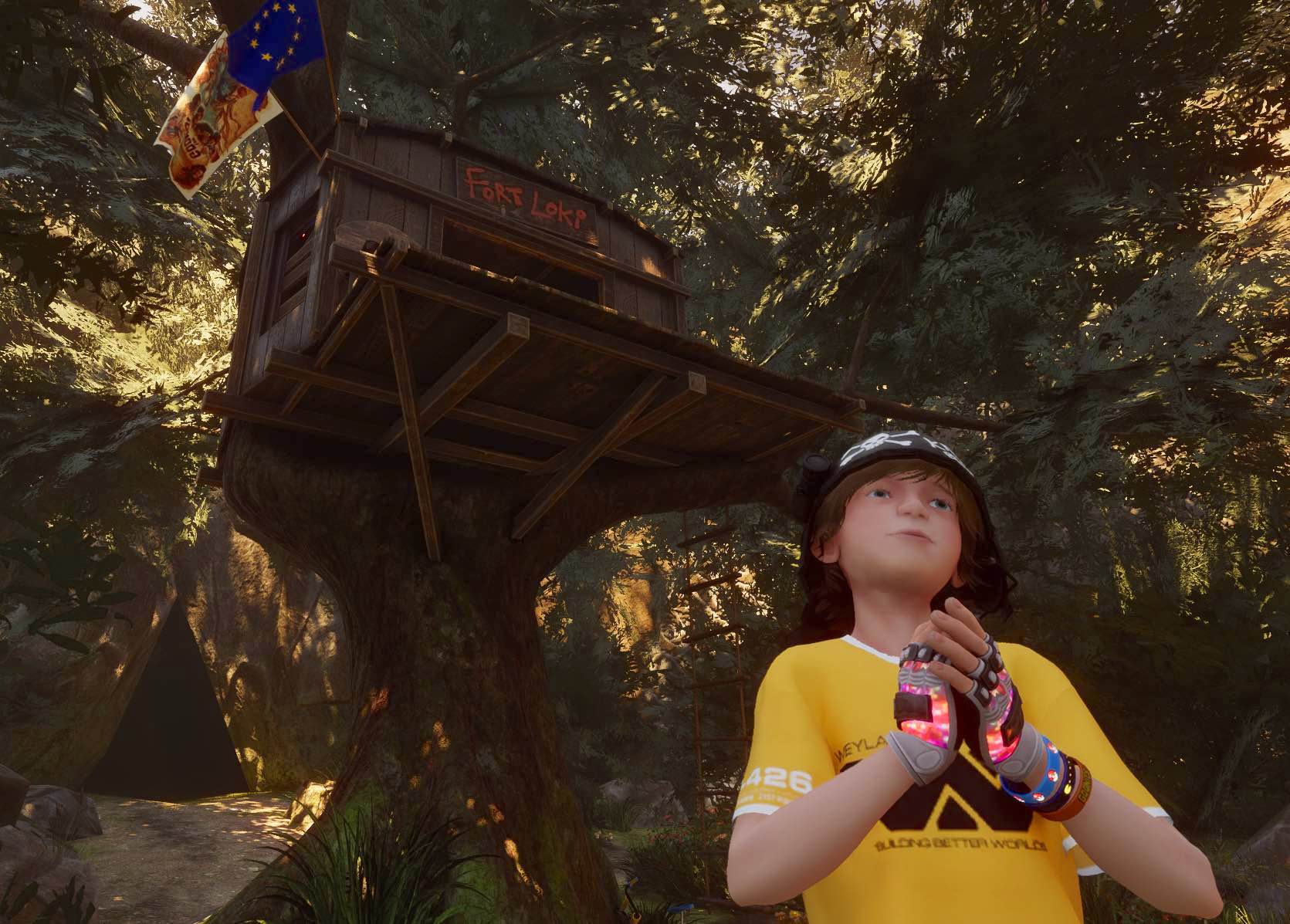 “Being a VR enthusiast feels like a race against time… or facebook… to make relevant social spaces. It’s comforting to know that Second Life is my rock to come back to while everything else is tossing and turning. Come on 2020, please be a good one!”

And so i started 2020 with enthusiasm. Little did i know what was to become. The threat of Covid-19 took over the world and VR was tossed about before it even had time to anchor down.

At the start of the year the Sansar experiment was abandoned by Linden Lab. It was sold to a strange company called Wookey and Sansars remaining team spent 2020 focusing Sansar into an Events Platform and found itself surprisingly relevant.

Secondlife found new relevance to as well as VRchat, Altspace, Somnium,  and any virtual social platform that gave users the ability to hang out together during world wide lockdowns.

Our little community in Second Life had planned to hold lots of events and traditions through the year. Suddenly these became an extremely important endeavour as we came together virtually to have fun, escape the pandemic, socialise and cheer each other up. Sometimes friends missed events because they had become sick, others found themselves banned by Linden Lab during a time where they needed their friends most, and in the worst case friends logged out never to log back in.

2020 hurt, it really hurt. As we start 2021 there is a part of Escapades Island that has lost it’s soul and i’ve yet to decide what i should do with the space. Our loss of Jesper Toll reminds me that even though this is a virtual world, the friendships and the presence of each other are very real. The memories created in these spaces are real, and the hurt in loosing these friends is real. Maybe i can be forgiven for thinking in Second Life we’ll all live for ever, that belief was crushed in 2020.

We persisted in getting the most out of our Virtual Worlds. Fantasyfaire was bigger and better than ever and every event seemed super charged. We opened a new Vortex Club with more space to dance and hang out. By the end of the year, literally a few days ago, i was exhausted. But regardless of Pandemics, i did manage to complete most of what i hoped to in my blog post from last year.

It was a fascinating year in Sansar. New owners, new direction, big music events, lots of streaming viewers. Yet somehow it left 2020 with the same issues and bugs as it did going into 2020. Full body tracking is still broken, still no full finger tracking. Still haven’t reached the dream of sitting on my virtual sofa while watching tv with friends. The nexus is still there, the UI still sucks.

During 2020 all focus at Sansar was on the idea of hosting entertainment virtually, which seemed a perfect fit for a year of lockdowns. The collaborations with Shangri-La and the Lost Horizon festival in July is still the entertainment highlight of the year for me. It was a mind opening experience giving a glimpse of that ready player one future.

But as we move into 2021 entertainment collaborations in Virtual Worlds are quickly being jumped on by many, accelerated by the pandemic. By the end of 2020 Roblox and Fortnite were having Entertainment Events for their userbase while Twitch and Youtube were streaming virtual Concerts from various platforms. For New Year VRchat brought in Jean-Michel Jarre which ended up being experienced or watched by 75 million.

Yes we’ve been hosting events in Second life for decades, but whats different now is that big media at last is taking VR more seriously at reaching consumers. It’s not just about being in a VR headset and being there, the business is in getting views. What i saw as being quite an innovation for Sansar at the start of 2020, looks set to be the goal of every major Virtual World Platform in 2021. How Sansar stays relevant amongst all this will be interesting to see.

In all of this it’s been somewhat forgotten that anyone can join Sansar for free and make their own virtual Spaces. I worked tirelessly to make a horror game in time for Halloween and it sort of worked. I plan to update it and also bring to Second Life this year.

I’m still working on my Treehouse like a virtual allotment, adding bits here and there and will continue to during the year. Occasionally new features are added by the kind Sansar Devs in their spare time to keep it’s original community occupied.

Clunky is how i’d describe the year. As a MacOS user i could feel the responsiveness of Second Life draining away from April onwards. We got the Enhanced Environment Features (EEP) which took over five months before the majority of SL could all see the same environments. The whole grid was moved to AWS Cloud service and i have yet experience the benefits. Maybe i wont because i’m on MacOS which in itself is degrading performance. To finish me off the latest MacOS Big Sur killed support for my 3D Space Navigator tripling the time it takes to do anything in SL. Well at least there wasn’t any price hikes this year.

All that aside we did do alot of events and the hope is this year we’ll do them all again bigger and better. I created a stage for SLEA which in a way is a clear statement that my imagination is super charged and raring to go here in Second Life as this year in Second Life i have two mail Goals.

The First is to get back to making clothes for my avatars. I managed to bring out Wave Two of my kid avatars for SecondLife with ‘Bakes on Mesh’ feature included which allows for easier customisation of Skins. The Avastar Plugin finally updated to support Blender 2.8. New clothes designs for modern kids would be nice, as well as a whole new range of victorian clothing. Maybe some extra niche historical clothing. I just need to make new CLOTHES!

The Second goal is to build upon the quests system i’ve created. I would like to improve the system so that i can quickly deploy interactive stories & quests. Uncovering story, Unlocking puzzles, defeating monsters, talking to NPCs. I don’t want to have to keep scripting for every possible encounter. I’d rather concentrate on story and the roleplaying. The outcome for this i hope will also be more Roleplaying Events at Escapades Island and New Babbage where it all started.

2021 will hopefully see the arrival of the Second Life Notifications app. It’s apparently been stuck in Apple Approval Hell. I’m aware this app will not be a full blown mobile SL Viewer and to be frank i didn’t want it to be. What i hoped it to be is a communications app that will allow me to receive and send instant push notifications and take part in group discussions without having to login to Second Life. This might though end up being another example of Linden Lab being too late to the party. During 2020 the two main groups i’m active in opened discord servers to expand and track weekly goings on in Second Life. The Escapades Discord Server now also includes Sansar as we expand activities to other virtual worlds.

More friends than i expected bought VR Headsets in 2020, joining me in Sansar. Some came to Sansar even without headsets, but i dont think it’ll mean abandoning Second Life. We might one day become less reliant on one Platform as a  home and end up visiting in multiple worlds.

When it comes to the ‘metaverse’ it tends to be described as being seamlessly connected worlds you can travel between. But what would it take to make this happen?

Even the current web isn’t as seamless as some might suggest, how many times in the past year did you have to sign up another account when purchasing items or services? Thats a new world and a new identity. There are options now to use identities between services with Facebook, Google and Apple that come with your own inventory of personal details and payment cards.

Another more clunky way the metaverse might slowly be arriving is in Avatars and human personality. My friends from second life have come over to Sansar, some to VRchat and try to recreate the same avatars if they can. I find this very interesting. Regardless of consumer inventory there can be a seamless sense of traveling between worlds as long as the avatars carry that persons persona, either with visual cues or just plain old personality. I’d imagine the worlds that make it easier to port Avatar models between worlds would stand to gain from breaking down the barriers much like real world free movement.

As for universal inventories, Virtual Worlds all want to offer their own exclusive closed inventories as a means to make profits. It’s hard to imagine them allowing you to take those exclusives to other competing worlds. But that’s not to say a universal inventory cant exist. The old proprietary FBX format is a standard 3D File format, and Pixars USDZ open source format is quickly gaining support for sharing 3D Objects as one file. Eventually i’d hope we get to a point where importing files is a simple task that does not require long discord threads of discussion and is simply just a few clicks to bring something into a world and even share between users in that world. I’ve seen attempts to do this already in some of the newer virtual worlds.

Now that Sansar has settled into it’s role of Virtual Events Hosting and struggled to keep up with the cutting edge of what VR has to offer, i’m going to devote some more time to other virtual worlds. In particular VRchat. I have a friend or two there that keep harping on about how ‘alive’ the place is these days, so it’s time to go explore more.

During 2020 VRchat overhauled their Avatar and World building 3.0 SDKS while also adding their node based programming language UDON. So i plan to create a new version of my avatar and go spend more time there during 2021. It’s possible that VRchat will become yet another Virtual Space me and my Escapades Island friends will end up hopping between for events expanding our shared fledgling metaverse.

Lets just get on with it!

Strangely 2021 looks really positive for SocialVR. I feel relaxed leaving 2020 behind me, but going into 2021 with renewed purpose in Virtual Worlds. What we stepped up to do, the events, the supporting of each other, i can only hope it all continues and will be built upon during 2021. Thank you everyone who made it through 2020 with me, let’s do the same with 2021, there is still lots to do!