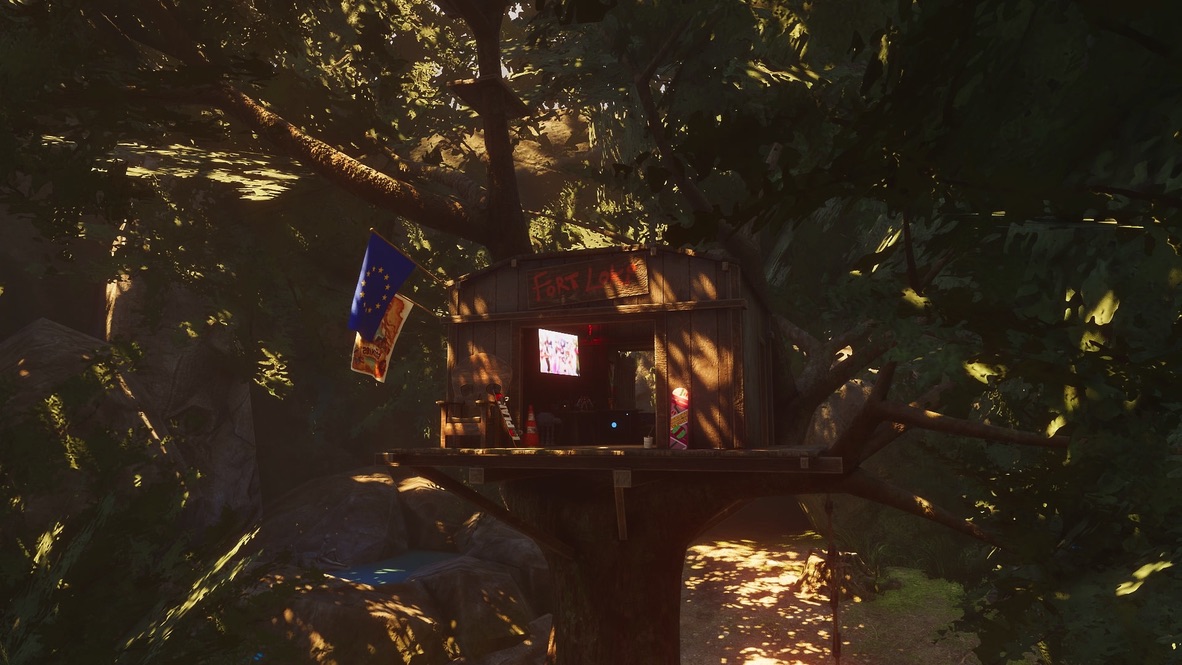 In my previous post i discussed how i saw Sansar as having changed perhaps from being a virtual world to an events hosting service. So events might be what allows Sansar to survive, but underneath it still has all the features you need to build your own worlds and host your own events in them… if you actually wanted to.

I think i’ve written before that Sansar has some of the best looking graphics on any Virtual World as the engineers created their own graphics engine, but this also makes Sansar the most graphics intensive virtual world out their needing very powerful hardware. It got to a point where i decided if i was going to be serious about creating stuff for Sansar i would need a dedicated windows machine rather than Bootcamping on my iMac, so in January 2020 i got a PC with intel i7 and a Geforce 2060 and mountains of ram.

I had created other experimental worlds such as a gallery, a tower and the Missing Souls quest, but Fort Loki was my first proper world. Fort Loki is a treehouse in a small gorge surrounded by trees. It’s quickly become a fun hangout and i love visiting it and relaxing. I often update it with new little nostalgic toys and whimsical secrets. Fort Loki is a launch spot for me and friends to meet before heading out to events or returning to from an event.

It’s amazing how quickly your brain maps out a place even a virtual one and gains a sense of comfort and home. The plan originally was to add little games and quests to complete, but so far i’ve not got round to it. It wasn’t until Linden Lab threatened to close Sansar down that i realised how much i loved what i had created there.

In October i began building my first proper game in Sansar called THE CRONE. It was supposed to be built both in Sansar and Second Life but i spent so much time learning how to do things in Sansar that i ran out of time to build it in Second Life.

Sansar requires you to ‘Build’ and upload the world before you can test it out, which can become quite frustrating and time consuming when your game is long and complex. I found it helpful to plan out all the games mechanics in cubes on a flat surface before deploying all the scripts into their intended object placements.

The Crone is a horror game where i try to scare anyone who plays it. It also served as a crash course in how to use Sansar Script Components. I can’t script so had to achieve what i wanted by using scripts from the Sansar Script Library and those put on the Sansar Store. I learnt a hell of a lot, and hope to apply what i learnt to Fort Loki.

How many will find and play The Crone i have no idea. Sansar does not supply world visitor stats and it soon gets lost in the cacophony of codex listings.

While Sansar has great tools for building worlds, it’s starting to fall behind with the advancements of VR and how i can be immersed in the worlds i build. Anyone who comes from a more advanced VR platform notices straight away that Sansars dropped the VR ball, from inaccurate Full Body Tracking, to issues with UI. Lacking the subtlety finger tracking can bring to interacting with physics, VR users still cant take snapshots within Sansar.

VR advancements aside, Sansar still allows everyone a place to easily and quickly build their own great looking Virtual Worlds for FREE. As an experiment i also ported Fort Loki to Second Life and VRchat. In second life the treehouse looses it’s sense of scale due to being desktop only and i found VRchat hard to achieve anywhere near as beautiful lighting effects as in Sansar. But then it has cost me getting a powerful PC with a high end VR headset to enjoy Fort Lokis eternal golden hour.