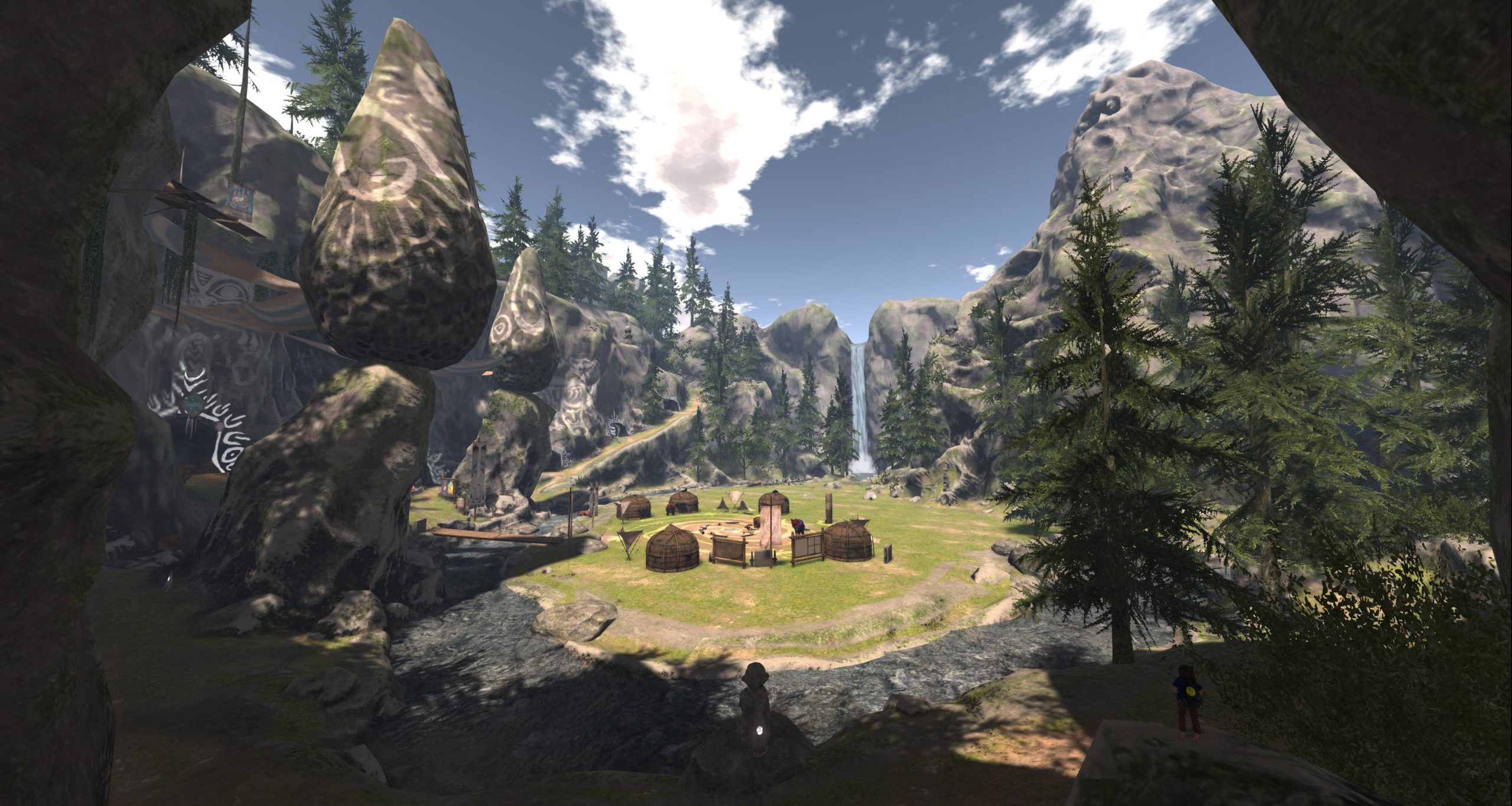 Fantasy Faire 2020 has been epic in every way possible showing Second life is as powerful as ever.

This year i returned to Fantasy Faire as one of the 18 world builders. Thats 18 regions of fantasy themed environments to transport Second Lifers to a world of myths, legends and folk tales.

I last did a Faireland back in 2018 with the Bazaar Dungeon and since then i’ve had an interest in doing something inspired by Native American cultures. Much like the tribes of ancient Britton and Ireland Native America has many different different myths and legends from which to draw from and it was fascinating reading about the various tales and beliefs.

One of the first ideas i had in my head as 2018 ended was of a rocky landscape with rivers and trees, a far more complex environment that i had previously attempted. I envisioned the Fantasy Faire roleplay group with which i collaborate riding on the backs of bears across grassy plains.

When eventually the time came around to start work on building the faire Land i wasn’t entirely sure how it was going to work. I was offered a corner region in the great square of islands which presented opportunities i had never tried before, adding to the list of uncertainties. At first i planned like in the past to build from the standard water level up with rocky mountain side surrounding the region as a ring. People would have to enter it through a cave emerging into the valley. Then after visiting the New Babbage Crystal Palace Exhibition i was reminded that we can customise water levels on regions. This led me to wonder wether it would be possible to lower the water on my region way below the others and make a Faireland where instead of building up i could build down? The idea of visitors walking into a region and going down instead of up was very appealing to me as a possible unique unexpected experience.

In 2019 i rebuilt the island of Escapades with large parts of terrain replaced with mesh alternatives. Only the beaches use Second Life materialess terrain. With the success at Escapades i planned to scale up and try to create the entire terrain of the Faireland as one big mesh object covering the region. This would allow me to use material maps, normals, specular, across the whole thing.

I used Blender 2.8 with its sculpting tools to create a sculpture of the entire faireland based on a collection of 63×63 sized Prims exported with firestorm viewer as reference for the regions size. I had also exported reference prims of the merchant stores so i could position where they might be located within the valley. Blender has alot of free sculpt brushes out there and i used the Zbrush Orb style Brush Pack to get the rock details. As i was sculpting the rocks and walkways and mountain, i was getting worried that i would not be able to bring all the detail into second life.

Next stage was to create a decimated version of the sculpted terrain. Duplicating the model i then used Blenders ‘decimate’ modifier to create a much lower poly version. This low poly version i then cut up into about 46 pieces smaller than 64x64m. Each piece were then UV unwrapped to have approximately four faces ready to be textured.

Texturing was a simple joy thanks to Substance Painter. Once you learn how to use masks and ‘generators’ to create level fx between different materials you can produce some very cool looking textures. I often use a simple dark brown fill layer with a mask generator of dirt fx to fill dirty edges and creases giving a nice worn effect. SP’s export settings also allow you to export for things in Second Life like emissive masking that allow for bright areas to glow while the rest of the texture remains non-glowing. I used this effect for the store entrances.

Substance Painter can also ‘BAKE’ all the detail from the highpoly sculpt of the terrain onto the lowpoly version. This allows me to retain all the details of the original sculpt.

Second life has many enforced limitations around mesh to help keep stuff optimised and part of being a Second Life creator is working out ways around them. For example you can’t have an object bigger than 64m square, this means to import and entire terrain map of mesh you have to chop it up into parts where each is smaller than 64m square then import as a link set. You then have to make sure that the collection of mesh objects you are importing is smaller than the regions limit of 256x256m limit. I found i was able to shrink the blender terrain model then once in Second Life i could enlarge to fit the entire region.

When importing to second life the physics shape for the model needs to be set to high, basically using the original shape as its physics shape. The viewer would often halt the import due to ‘small triangles’ marked in red in the preview. It’s tempting to have Second life generate its own physics mesh but i strongly suggest against that as it can lead to higher land impact and physics full of holes for your visitors to fall into (sorry Nat). It is better to cancel the upload, go back into Blender, find the small triangles, adjust distance of the vertices in the small triangle, then try import again.

Once the 46 part Mesh terrain was in Second Life and positioned correctly i then had to go around each part and add it’s texture materials. About 480 textures were used to material map the terrain and i was a little concerned that Second Life would have trouble loading them all in, but Second Life is smarter than you might think with how it displays the worlds and the finished result was better than i hoped.

Following this it was just a matter of adding grass, bushes, animesh bears, the amazing Skye River kit, Krystali Rabeni’s Pine Trees and the wonderful Spirit Statues created by Silas Merlin. (We wont mention the issue with Linden Lab releasing a new EEP viewer mere days before the faire opened).

What became named The Spirit Valley of Kuruk was one of the most pleasing thing’s i’ve ever created and once the faire was open the Valley came to life with the Grizzly Cubs roleplaying, visitors of all shapes and sizes, dragons stretching their wings and galloping horses.

With the faire in full swing i swapped my World-builders hat to the Roleplay Organisers. For weeks i had also been collaborating with Strifeclaw to come up with a story that would weave around the Valleys locations. Places such as the Cave of Destruction were specifically created for that. Inspiration for the Valleys back story flowed from Native American myths of yetis with frozen hearts and Owl Women. Originally the Bears were going to be warriors but i changed my mind feeling people would think of His Dark Materials, so i decided to change them to chanting peaceful bears which in the end fitted better with the Valleys relaxing atmosphere.

The Roleplay story continued the tales of the four Guardians that arrive at the fairelands to help battle against the influence of the great unweaver. We try to have a basic story plan of events and encounters that need to happen, building set pieces that get unlocked during the week, but leave open the possibility that things will change depending what the players choose to do. For example while it was planned for a chamber to be discovered inside the valleys central mountain, a mushroom trip to the spirit world wasn’t originally planned, and the unexpected deaths of two of the characters during a quest lead to an extra day of roleplaying and the creation of a funeral scaffold.

The effort me and Strifeclaw put into organising the roleplaying is only matched by the passion the role-players put into it on their side. Pushing each other to weave these totally immersive, heartwarming, fun, tragic, scary experiences that catch the emotions of those stood around watching them.

The day when the roleplay group called for the fairylands to help expel the evil from their Chief Bear was touch and go wether it would work. Triggering all the various levers of illusion to conjure the manifestation of the Evil taking over the Valley was marred by glitchy internet streaming and lack of time to prepare that day. But after the event was over the Instant Messages came pouring in saying how they were crying from how emotional it had been to witness. If i could hug Strifeclaw through the screen i would have out of relief that it all went to plan.

You can read the entire chronicles of this years Roleplay story on the Fantasy Faire website thanks to Strifeclaw.

All that magic of course is done for an important reason, for the relay. The Kiosks at the roleplay events raised more than we could possibly have hoped leading me to wonder how we can top that next time. I wont be building a Faireland next year as i do them every two years. Instead i’ll be collaborating with Strifeclaw again on the Roleplay stories. But i already have an idea for 2022.

It has been an incredible experience again to do Fantasy Faire. I venture to many virtual World platforms, but nothing gives virtual worlds more relevance to me than Fantasy Faire. It’s so much more than a shopping event, it’s informative, inspiring, groundbreaking. It brings people together, immerses them, friends are made, comfort and support is given. What the organisers and creators of fantasy faire do is the closest i’ve got to real magic.

Thank you to Elizebeth and her team at fantasy Faire for allowing me the chance again to push my creativity. Thank you Silas Merlin for helping with Kuruk. Thank you Strifeclaw for putting up with my last minute changes to the story lol. Thank you to all the role-players who took what Strifeclaw and i gave you and took it to a whole another level. Thank you everyone who visited the Valley Of Kuruk and enjoyed it.

You have until 10th May to visit The Spirit Valley of Kuruk before is disappears for ever.

3 thoughts on “How we made the spirit valley of Kuruk.”