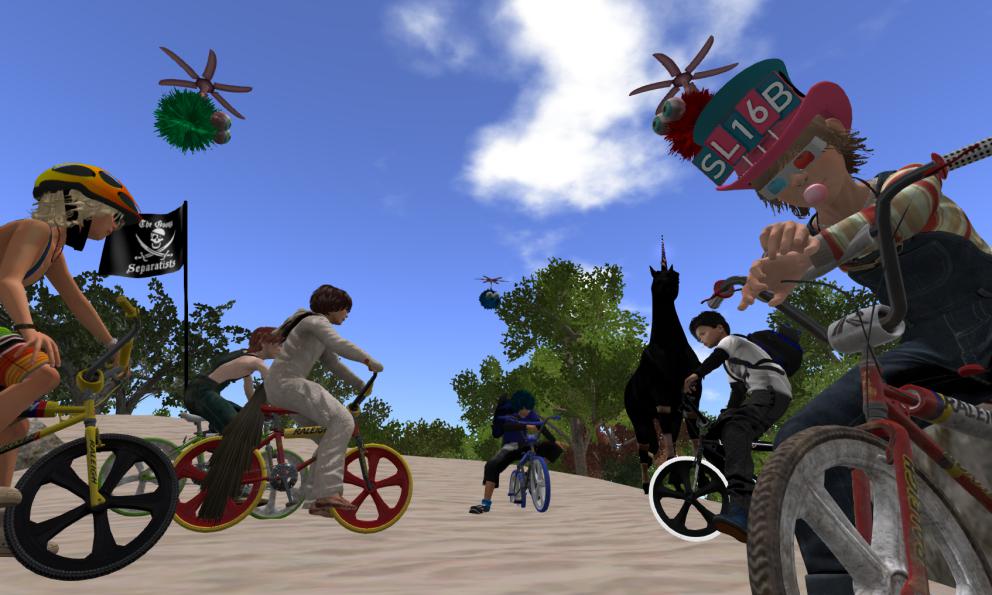 This week unless you were under a rock was the 16th anniversary of the existence of Second Life, the biggest user generated & sustained virtual world.

Yes it’s still around and users are still enjoying the annual anniversary celebrations with exhibits created by various communities still collaborating and building using old and new content creation techniques. At the SL16B exhibit areas i found examples of fantastic imported mesh while also enjoying just as fantastic examples of Prim Based creations. And some of these exhibits are just plain whacky and fun.

The theme this year is 1950s era, and exhibit areas are much smaller than the grand old days of 2008. It used to take me a couple of days just walking around all the region simulators. But It’s a sign of Second Life’s maturing that the exhibits are less, but offer now big lake side areas, a large beachside location to chill out and relax. I felt like it was a good mixture of what makes Second Life so great.

I and my friends like to gather and go on a bike ride at SLB and this year i think we had the best experience yet thanks in part to the Lake Side dirt roads. We Goonies do love a good area to explore on our bikes.

There were of course three or four performance stages with fantastic live performances from artists from all over the world. Singing original music and cover songs helping users immerse into that spot together.

All week there have been DJ’s playing music for those that turn up at the stages, and its a great time to Teleport in and meet random crazy people from a cross the grid you wouldn’t normally see… although its fun just how many people i meet at these things that i already know :-p

AND SL16B IS STILL OPEN, so check it out!

My own exhibit at SL16B was a bit of a last minute frenzied slap together. In my head i had a general idea for what i wanted to do, a 1950s sci-fi environment that inspired nostalgia for films like forbidden planet (without the misogyny), where you could discover alien life forms and visit a secret lab, all contained under a crazy Googie style exhibition dome.

I think i managed to pull it off just about. I wanted a lot more interactivity with things like getting prizes for finding all the aliens and have some of the animist aliens eat visitors, but in the end other work took priority leaving me with little time.

Some of the stuff such as the Underground Space lab and the Information buttons will be used on Escapades Island as we continue to rebuild and make the place more interactive.

After 16 Years it is easy to look back, laugh and cry at all that’s been discovered and learnt about existing in a virtual world. The griefing, the drama, the loves, and the hates. The paradigm changes in our outlook of existing, living in Virtual Reality. The connections made across boarders, the exceptance of our cultural differences, the realisation of how similar we are and how easy we can come together regardless of how bad we all are at spelling english.

And this is why Second Life still has many years ahead of it, we need this space, not to hide from reality, but to reinforce what we love about humanity as we wait for the real world to catch up and stop being a dick.

Happy 16th Anniversary everyone on the grid :-p