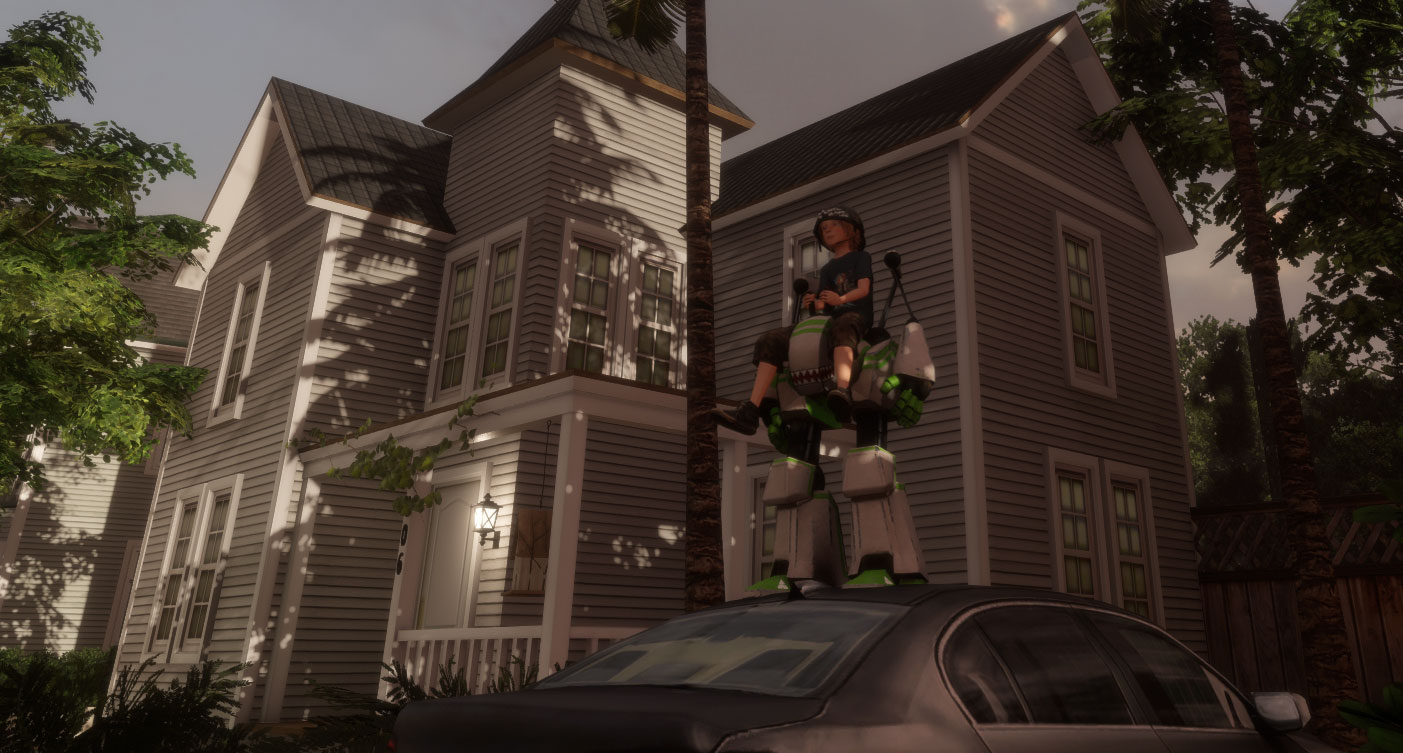 There is something that’s holding me back from using Sansar. To some it seems stupidly unimportant but for some reason the default avatars in Sansar make me not want to use it.

I’m Loki, i’ve been Loki for 13 years now, and when i put on the disguise of these random Sansar default avatars i don’t feel like ‘ME’. In the end i just feel like i’m waiting for the moment when i can look the way i want to. Gawd knows what this means for my psychological state in the real world. :-s

Two or three weeks ago something changed though. Linden Lab updated Sansar to allow ‘Custom’ Avatars and for the first time i was able to be ‘ME’ in Sansar and it felt great. Now i must point out that Sansar still does not support any avatar size other than the default adults avatars, so to get my Kid size persona into Sansar i had to be creative. 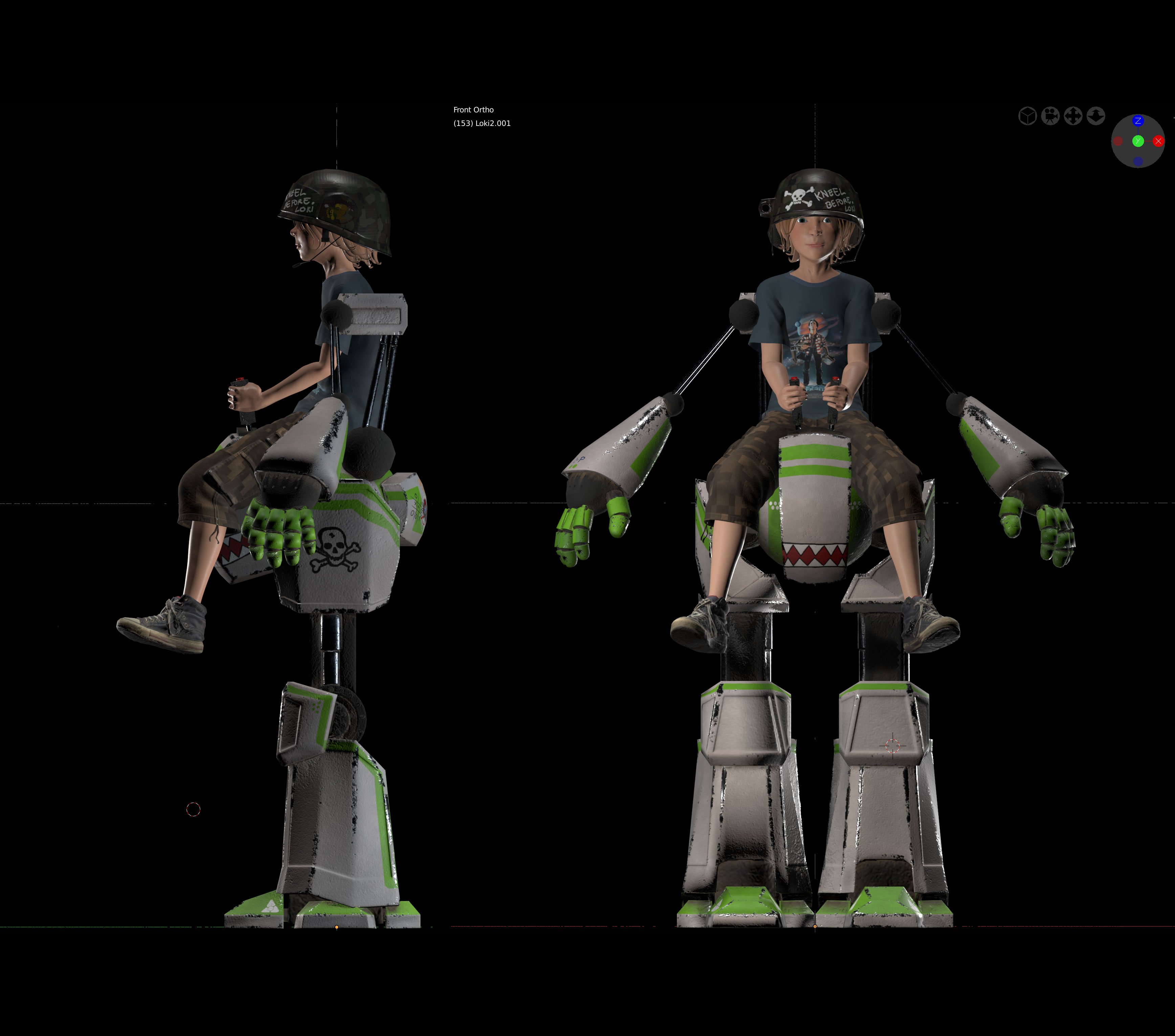 I placed my avatar on top of a mech-robot and rigged it so that the Legs and arms moved in sync with the default Sansar Skeleton and posed Loki so i looked like i was controlling the robot with two joysticks. The Head of my avatar ended up being at the right hight to be rigged with the Sansar Armatures head so when i look around in HMD mode so does the kid avatar.

Being at Ease with your avatar.

With this avatar i ended up spending almost 2 hours in VR talking, and thats all i did, i talked, and laughed… on top of a roof…. to a man in a rabbit suit, a crocodile, a blue jelly bear… and Draxtor… and it was the funniest thing i’ve done in ages.

I’ve complained before about how hard i found it as an introvert to be outgoing in Sansar while everyone else seems so out going. I went to one of Draxtors ‘Atlas Hopping events’  and felt more at ease on top of my robot but Atlas Hopping wasn’t as fun as i was expecting since the loading times of experiences meant i was already left on my own by the time i got to places.

The next day i decided to go to the Custom Avatar Contest at a grand theatre hall. I turned up an hour late and didn’t understand what was going on but then i heard Draxtor up on the roof. While up there we discussed all sorts of things and i surprised even myself with how outspoken i had become in voice. How much of this is simply because it’s Drax I’m talking to (he actually talks like he’s interviewing you) or has there been a kinda self confidence boost knowing that they now see me as Loki rather than some freaky default avatar?

At one point Silas showed us one of his many avatar experiments which was a big blue jelly bear with eyes that were wide open and looking about in a constant shocked expression that inflicted everyone with fits of laughter. Then to really kill us off Silas had an internal issue of angry cat fighting. I had to leave the party and remove my steamed up Vive headset to wipe the tears of laughter from my eyes.

I’ve read that the Lab do intend to allow Armature resize eventually, and when they do i’ll be able to get off the robot and will probably build a lot more stuff. Second life still excels at the art of collaborative creation and sharing, with features such as drag’n’drop giving items which you can edit and hand back to friends missing entirely from Sansar.

Sansar is still very limited, but that limited use is still very powerful in HMD mode compared to desktop. The simple experience of being with others from around the world in one place, able to pick up things and laugh about stuff in HMD mode is SO powerful yet SO simple. Second life is a lot more demanding in this respect for it kinda demands more things for us to engage with. It makes me think about what sort of spaces to build in Sansar that can boost the enjoyment of such a simple premise.