Skip to content
The plan was quite simple. Donations to land Tier were down so i needed to make Linden Credits quickly to stoke up the donations thermometer.
Previously i attempted to create a Mini SL game called the ‘Secret Underground Base‘ which did very well in bringing in credits to subsidise the donation target. But as i’ve already written after a week the initial 50 paying residents a day dwindled to below 5 and now zero.
I’d assumed initially that this was due to Destination guide placement moving off the front page of the website, i now also think that the lack of the ‘Games’ category in the new Login screen destination guide helped in making my Mini game less visible.
So with interactive destinations currently loosing interest with visitors over a small period, permanent mini games seem a bad idea. Instead i would need to create short term Mini Game Experiences that got a large crowd for the first week and made a pile of credits before the lifespan of interest OR visibility died.
So with this in mind i created the ‘Escapades Evil Zombie Worm Massacre’.

“Save the Puppy from the enchanted cage up on the mountain by finding the 5 magic words by killing Giant Evil Zombie Worms by summoning them from the 5 giant Musical keys on the island marked out on a map.”

Does that sound simple enough? it turns out it was not.
The generation of Linden Credits came from selling the Chainsaw, HUD & map at L$200 (just under USD$1) which you needed if you were going to kill the worms. 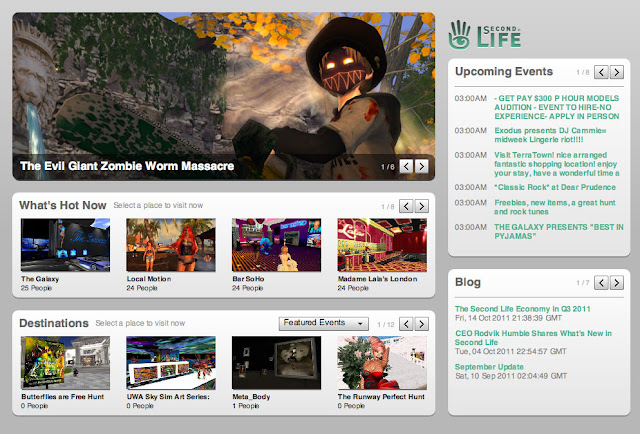 I submitted to the Destination Guide with instructions and the note saying it cost L$200 to play, and to my shock it was placed as the featured destination for three or four days. But things were not going to plan. The first day i had a visitor count of almost 600 but only sold 8 chainsaws, so 600 people arrived at the game, and only 8 bought the ability to play the game.
So armed with my best alt i mingled with the visitors to see what was going on. 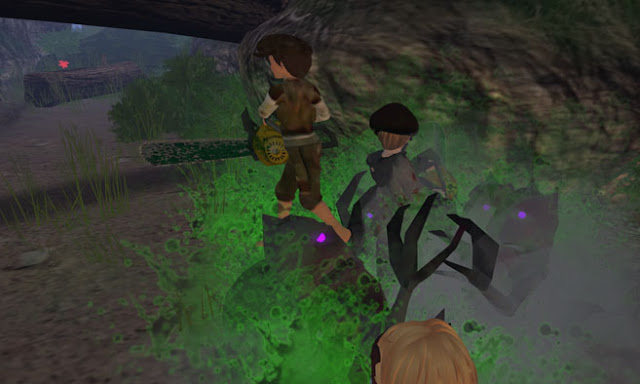 First thing i learnt was that almost everyone arriving was new to SL and using Basic Viewer, so they had not the ability to buy the chainsaw and had no idea how to change to advanced.

Secondly there was an issue with the way i had set up the Chainsaw to be bought. As my friend Nat pointed out, there are certain universal things we do when viewing a website, a rule to browsing content. When designing a website you stray from these rules at your own peril. The same it seems can be applied to virtual 3D worlds.
I had a sign stating ‘BUY THIS CHAINSAW TO START THE GAME’, next to which was a chainsaw on a stand which you clicked to buy. What i discovered was that people were clicking the ‘sign’ instead of the chainsaw and walking away thinking it was broke. I could not do anything about the Basic Mode using n00bs but i could at least correct this issue of intuitive user habit. Making the sign an option to buy the chainsaw improved the participating of the game a lot and my goal of meeting the Tier Target was finally reached just in time. 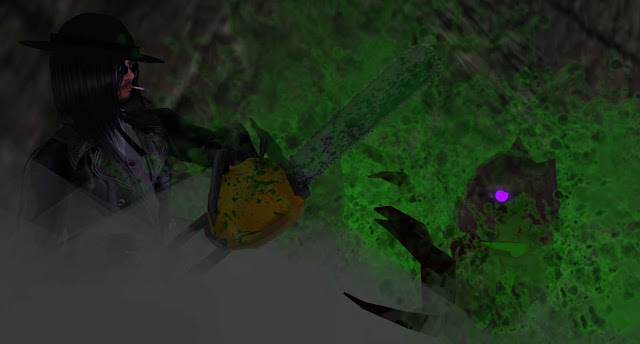 So the game is over and it brought up many thoughts an questions for making future games and using destination guide to promote them.
1.How can we sustain interest in a destination.
It reminded me of something i read about the lifespan of a ‘Tweet’ and wondered if destinations on the destination guide followed the same premiss. Is there anything i can do to sustain longer visibility, or is the period of visibility dependant on the mechanics of the destination guide?
2. Should i have allowed n00bs to my mini game?
I had a specific goal, to make money by offering entertainment. With n00bs arriving in droves with the inability to purchase and lack of basic skills, should they have been their at all?
The game was targeted at people who already had basic knowledge of SL, who could immerse themselves and of course the ability to buy stuff. All the n00bs ended up being was a nuisance and immersion killers not to mention the lag caused by them all arriving en mass.

“i can’t find the evil worms, can i kill this mountain of n00bs instead?”

3. How can we target Sl users of a certain level of experience?
Currently the way SL communicates there is no mass quick way to share destinations inside SL other than say sharing a landmark with a friend and posting on your SL feed a location. Perhaps a re-share function could be added to help people share destinations between friends via SL Feed?
Destination guide is a good place to be listed for a flash flood of n00bs, but the drop off is quick and the
functionality is perhaps to simple.
What i would like to see from Destination guide in future.
Destination guide seems geared to the n00b. Once it has showcased places to the n00b it then lacks any further helpful options.
Once you move from n00b to light experienced user it would be good if the destination guide changed to suit your skills. Such as simply allowing you to post destinations from the guide on to your SL feed, why this isn’t an option along side the Facebook ‘like’ button is puzzling.
I started a discussion on my SL feed with a few friends about  targeting SL users of a specific skill set or interest and how that could possibly be achieved. ideas like a skills rating system for destinations. Places that are suited to n00bs are rated for n00bs, and those with a bit more experience can find places that are more challenging.
Another idea was to then allow users to adjust their profile settings to express their skill level, where n00bs were set to ‘learner’ and more experienced users could change it to ‘experienced’, or the settings could change automatically depending on how old your avatar is or how much time you have spent in SL. The result being that the destination guide could taylor a guide based on your skill settings. This could even go further by comparing destinations with your profiles listed interests.
The idea being that you get an SL destination guide unique to YOU and i get the sort of people i targeted visiting my mini game.