Yeahy i finally got a consumer VR Headset… and no its not the Oculus or Vive, it’s the lower cost PlaystationVR. This is the first VR Headset I’ve used since the old Oculus DK2 before Oculus pulled the plug on Mac support. So i won’t be able to compare PSVR performance with the higher end VR rigs, instead im just going to write my thoughts as a casual gamer and Second Life creator. 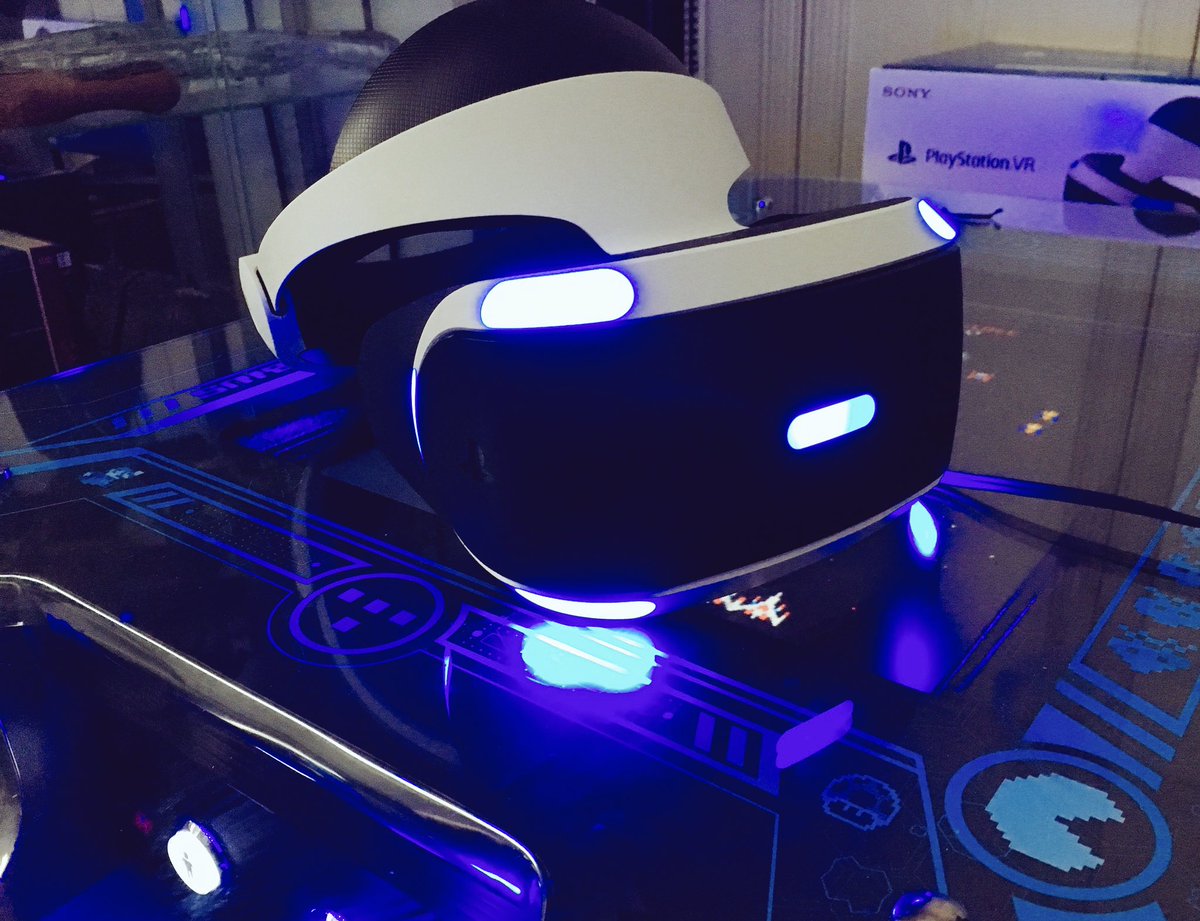 First off The PSVR looks awesome as a headset. It fulfils my retro geeky expectations rocking cool tron style glowing lights which it uses to track your position. Being that my only previous VR experience was my iPhone in google cardboard and the oculus DK2, i found the PSVR display to be a lot better and decently clear, although I found that this sometimes comes down to what content you are viewing. The head tracking is great and while not room scale, i did find myself walking left and right for some experiences sticking my head over edges and out car windows. The other satisfying thing with PSVR was its ease of use. You just click a button on the PSVR and stick the thing on your head and you are IN.

I have not bought any full games yet, and i’m not sure when i will as there isn’t really anything that screams out to be purchased. There are plenty of great demos though and free short experiences to try. Game demos i enjoyed were Battlezone, which sits you in a tank speeding around and shooting things in a tron style landscape. I was quite surprised how i did not get VRsickness in Battlezone. I don’t like driving games much, but the demo of drive club was fun because it was another fun VR experience, sticking my head out a car window at 100mph like a dog was simply fun as was glancing over at the car racing beside you. 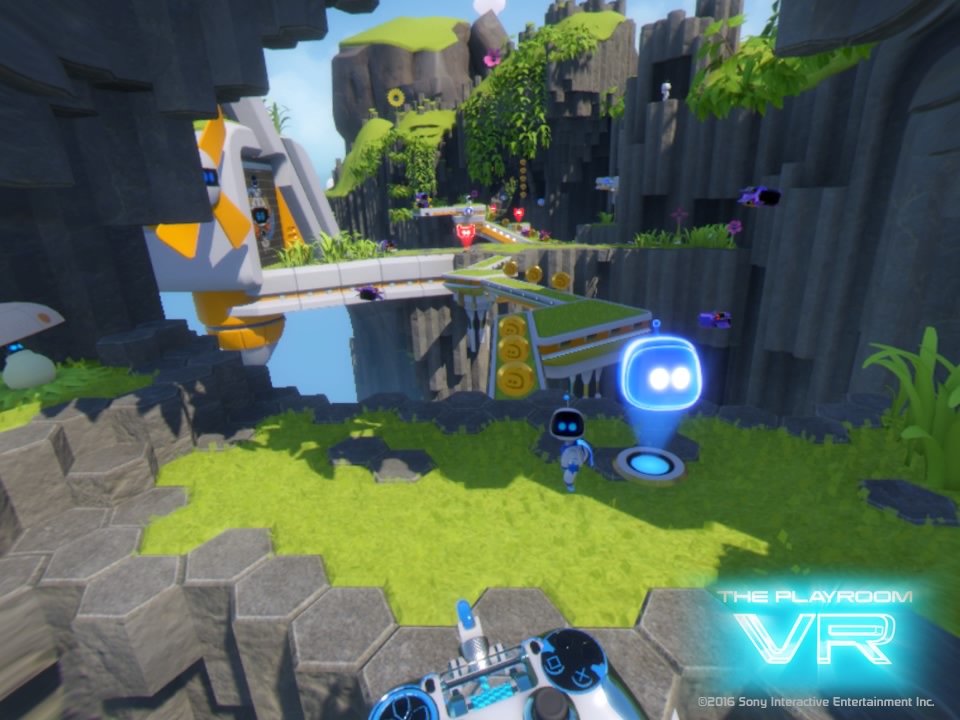 I think my favourite gaming experience was part of Sonys PlayRoom VR. A short platform game called ‘Robot Rescue’ where you are basically standing in the platform world and remote controlling a little robot on the ground infant of you. It never occurred to me that this would be how a platform game could be played in VR and moments where i looked up guiding my robot up the side of a cliff, scurrying in between nooks in the rock for coins just blew my mind. But really everything feels like short demos and arcade experiences so far. I’m waiting for an an epic experience, one where i just wanna get back in and push further into the experience. Maybe we are just testing the water, seeing how PSVR users feel about it, but im demanding right now for more!

It was nice to see some non gaming experiences on offer for the PSVR. One such experience was a 360 short film called ‘Invaders’ about 2 rabbits meeting aliens. There was an instant lack of depth to it and i don’t think it was even in 3D. The second VR short film i saw was another ‘blew me away’ experience.

Allumette is a free VR story experience, i don’t think it can be called a film as its entirely 3D rendered real time (i think) telling the story of a little girl remembering the past in a town in the clouds. As a viewer you stand over the floating town like a Stop/Go Animator watching the story unfold around you. You can lean right in to see the characters faces, look around them as they act. It’s one of those experiences that people say ‘you have to see it to understand how awesome it is’ because it really is that magical. Allumette is also inspiring as it’s exactly the sort of thing i would love to do myself in something like Sansar if it would allow me.

While predominantly focussed on playing PS Games, the headset does also open doors for user generated content in the form of 360 photos and video through its media player. I was able to create 360 images from within Second Life and view them in PSVR and they looked much more stunning than in Flickrs low rez browser viewer.

Already having fun looking at my own #SL 360 content on #PSVR using media player pic.twitter.com/N1Xt8af7Bj

I also did some tests rendering 360 video from Blender which looked great but lacked the depth of a 3D image. On top of the equirectangular ratio, 360 images also need to be in side by side (SBS) 3D format for there to be depth. Hopefully Sony will update the media player to accept SBS in future and maybe Linden Lab can add SBS or OverUnder to their 360 snapshot feature?

Looking ahead as a mac user.

Im also looking at wether its possible to connect my PSVR to my Mac, and what doors that might open for other content and experiences. A guy has created some software called Mac Morpheus that apparently allows your mac screen to appear on PSVR so you can watch 3D 180/360 movies

While i wait for Apple to get their VR arse in gear, Sansar to open and save up me pennies for an HTC Vive, i’m quite pleased with how good PSVR is. It will keep me entertained and busy with simple 360 projects in the meantime. 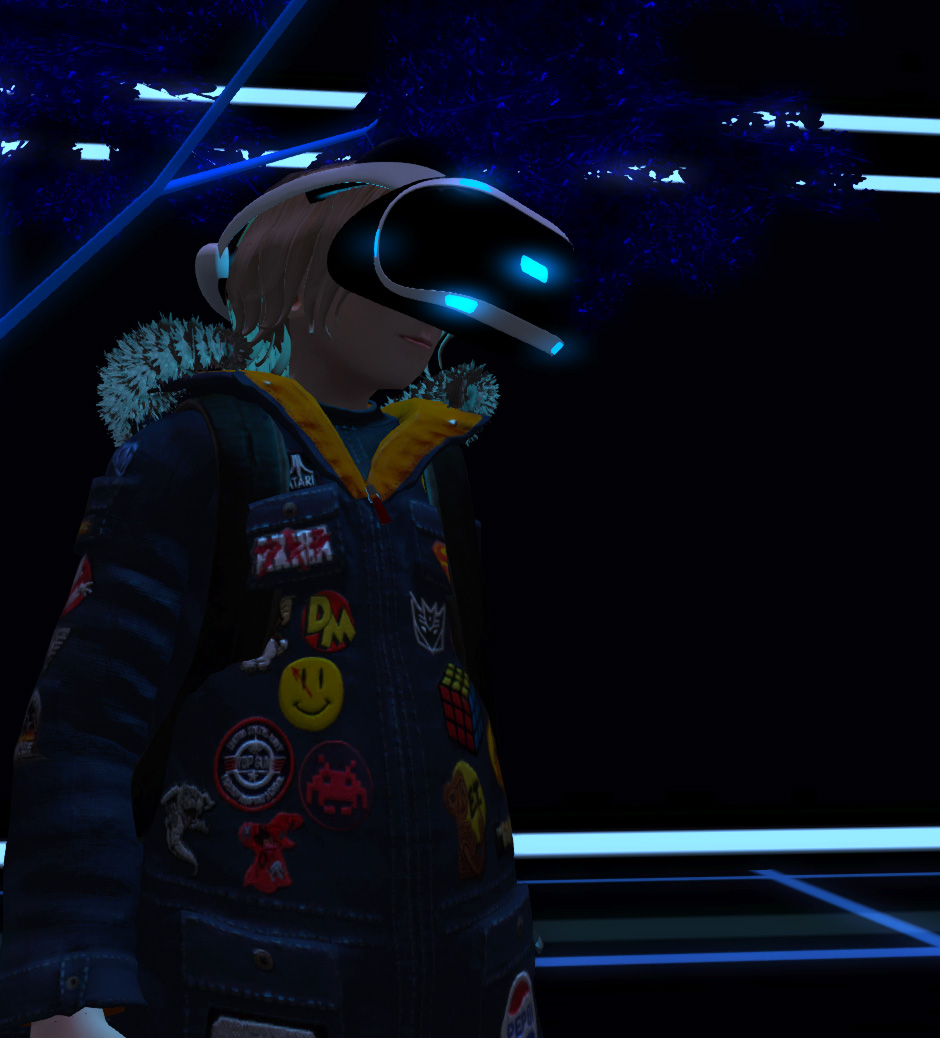