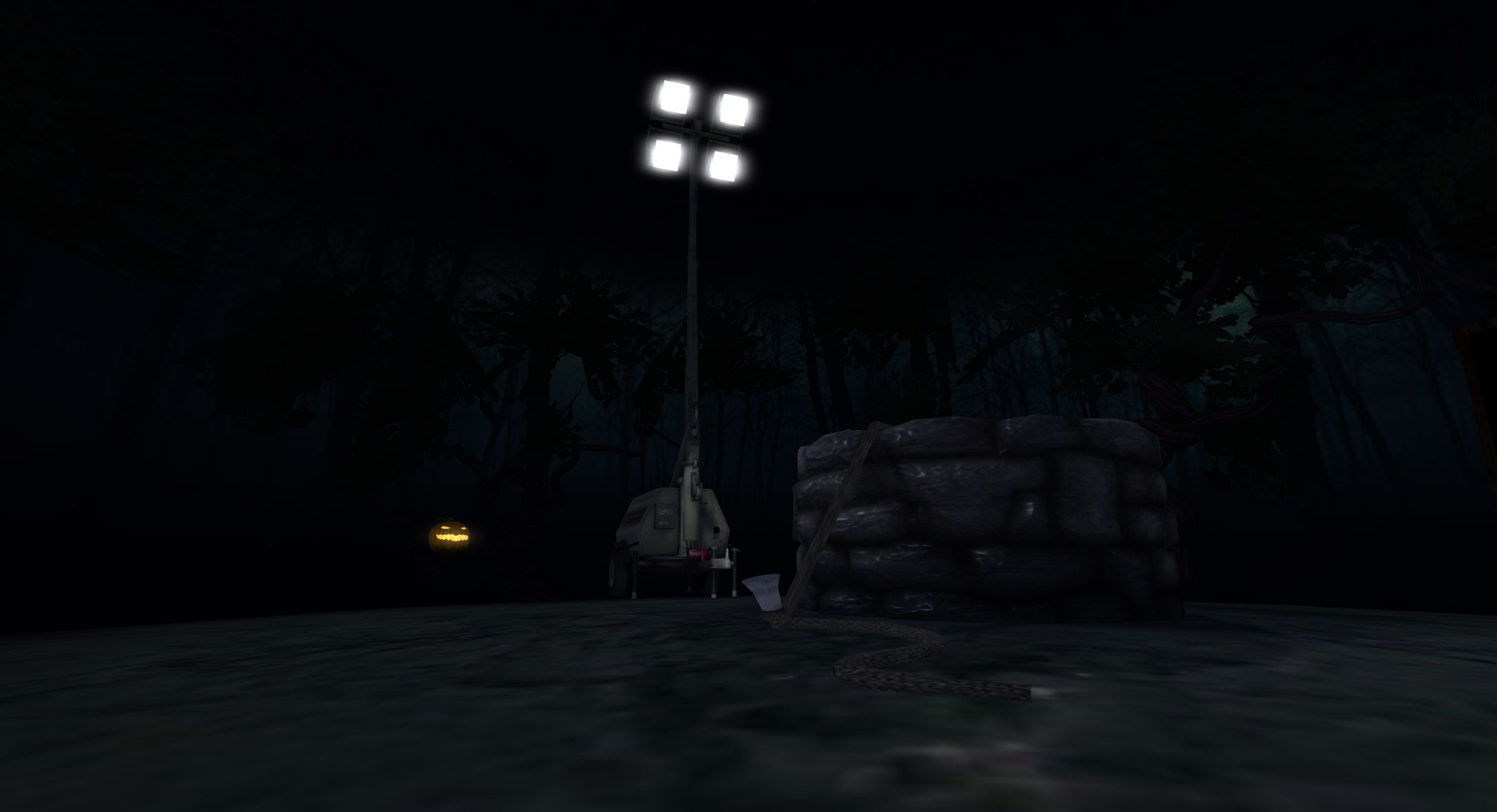 It’s been just over a month now since i opened the 3rd chapter in the Well horror series, so how was it received and what did learn this time?

While i managed to finish and open Infirmos two days before halloween, it was not placed on the destination guide until the following week. How much this post halloween addition effected visitor count i won’t know, but simply being added to the destination guide as usual showed a massive surge in visitors. The power of the destination guide is undeniable and the way some friends find their places rejected while other destinations currently lead to empty regions, makes me wonder if Linden Lab could improve things in this area of discovery.

I try to count visitors at various parts of the experience in order to cage the difficulty. How many people are interested, How difficult is it to enter and how difficult is it to get through. I placed a counter at the start and the end but forgot to place a counter at a key point to know how may actually got into the experience. Because of this i was unable to cage how many after using the hud actually ended up down the well.

Up to this point Infirmos has had just over 2300 visitors, thats up from the previous chapter and of those only just over 185 made it to the end. Thats surprisingly low completion rate. I don’t know if people found the game to hard, or they got bored, or crashed. It’s possible that people gave up because there were no clues to what lay ahead rather than being to difficult. Some people raced through the whole thing in ten minutes while others spent over two hours (Watch Draxtor loose his mind).

Things i think i got right and wrong

• No buttons: In previous HUDS when a dialogue pop up appeared you had to click an icon button to get rid of it and progress with the experience. I realised when people read these things they tend not to move, so decided to have the pop up vanish only when the avatar moves. This meant you never needed to click anything inworld while down the well.

• Location based events: Instead of having the user click objects to uncover secrets, i used co-ordinates based events. The HUD is constantly checking its position and comparing it with a list of co-ordinates. If the avatar is with a specified distance with a location it will trigger the appropriate event. This is not a sensor ping. It again allows users to trigger events by where they stand and not need to click anything inworld. Unfortunately i may have made some locations hard to trigger unless you were stood right on top of them.

• Mouse Look: Making the experience so you did not need to click on objects meant the experience should have been good for people who use mouse look and VR Headsets. Unfortunately some of the key story elements relied on Camera positioning which you can not see while in mouse look. Thats something i need to work around or keep in mind in future.

• XPtools: Using the new XPtools features allowed me to set up the most easy starting point I’ve ever done yet. It consisted of three buttons, 1.Joins you to the experience, 2. payed for a pass and 3. attached a hud to start the experience. While this was the easiest yet, some people still found it hard to cope with.  Some had trouble abandoning their ideas of how SL works, looking for a HUD in their inventory when intact they already were wearing it in temp form. Some had no idea what an experience was and why they needed to join it. Some thought they had to join a group. In future i would like merge all three buttons into one, but I’m not yet sure thats possible with LSL limitations.

•  It’s too hard/ It’s to easy: As with the previous two chapters people equally complained it was too hard or to easy. Perhaps i should have a way for people to choose to have a walk through or extra clues as an option. Sometime people don’t want the fuss of puzzle solving, they prefer to experience the story if there is one. It’s something i’ll consider next year.

This is just a few of the comments i had about Infirmos.

“Scary but a lot of fun at the same time! So cool xD”

“Just had a blast, on this little adventure with a couple of friends best part was the cave. <3.”

“The way the sets changed was inspired, thanks very much for sharing this Loki.”

“Didn’t get any further than the first blue door, got tp’d back and forth. Explored every single room, got bored and left.”

“This waas a great experience. My friend and I did it and it was scary and fun. Please keep these coming. Well worth the money spent. I suggest to anyone thinking of doing this, jump in heads first and watch out for the shadows lol….”

The rewards of building an experience

It took me a month to build Infirmos and i made enough from it to almost justify that work. The more i make these things the easier it’s getting and the time spent building comes down. Trying to balance the work lowed with what you expect to get back can be tough and its hard to see big groups of people getting the returns of all their efforts in SL doing this. Of course i could leave it up now for as long as people keep visiting it, but a Regions prim count is precious and eventually ill need to remove it to replace with something new.

And there will be new things. 2015 has been an interesting year and 2016 should be even more fun as i start applying what i’ve learnt to new adventures. #FantasyFaire