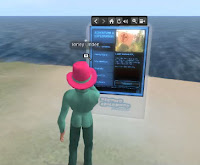 Six months ago i set about using shared media to produce in effect a ‘PrimApp’ to replace the old prim & script bulky Kid Avatar Destination kiosk. Those who regularly read my rants will know i came across a show stopping bug where viewer2 would not recognise an SLURL with two words to the sims name. This Bug did not just effect media on a prim, it also effected the built in viewer.

I filed jira bug report and a few friends backed me up on how important it was to fix this bug. Linden Lab however did not feel it effected that many people and so reduced it to a ‘Minor’ defect.

I have moved this issue down in priority. This does not affect a large number of users.

So we come to January where Linden Lab announces new browser based profiles which includes your photo, classifieds, groups, and … Picks. Suddenly Linden Lab have a need to fix my bug as any profile Picks will not open properly, and guess what.. they have.

Suddenly the Bug they said was just a minor problem that only effects a few is a MAJOR bug now that it effects THEIR plans to innovate. Viewer2.6 Beta which is the first to include the new profiles fixes the bug that i have been asking them to fix since august last year.

So what happened? Were they waiting for what SamuelLinden said was a ‘qtwebkit’ issue to be updated before rolling out new web based profiles, or did they suddenly decide, ‘oh crap we suddenly really need to fix that bug that does not effect many people’

Any ways it’s fixed now and i can move on to making the SC Network…. well almost.
The Viewer2.6 beta has a few glitches that prevent me on my Mac from actually using what ive already built. Works fine on a PC, just not on a mac so i guess they’ll give it minor priority. Filled a new Jira. But i fully expected them to release the final 2.6 with this bug.

In the mean time i will start gathering submissions to the SC Network for the PC users of SL.