This week Apple released iAd Producer software designed to make building simple, interactive Adverts for iPhone & iPad. It is AWESOME to use, so intuitive that i did not even have to read any instruction PDF’s i just got stuck in and built fun iAd Apps.

One of the softwares features is the ability to export as a webapp in safari in order to test quickly your results. It was here i suddenly thought this could be used in SL on a prim via shared media.

Anyone with a bit of a design sense can pic up iAd Producer and build interactive PrimApps allowing people in SL to click through information, adverts, videos ect. Of course what i would love to use it for is to build useful network. Those who have followed my blog know that i made an AWESOME community network destination kiosk, but a bug in either the webkit Linden Lab uses or Viewer2 it self causes the viewer to not recognise double worded SIM names in SLURLs. Read and vote for it to be fixed on the JIRA 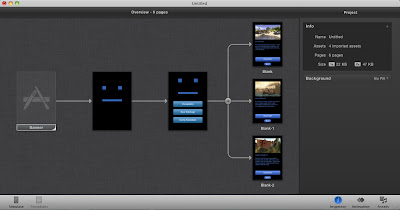 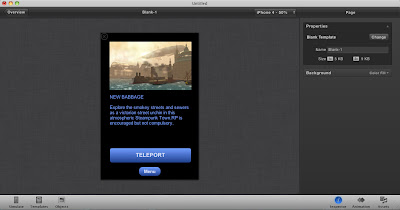 I mocked up a quick version of a community network kiosk using iAd Developer in just 15 minutes, but the SLURL bug still persists so all you will see is the potential.

I also created a test Comic book on a prim app which allows you to drag and swipe the pages on a prim. All this is pretty awesome, shame all my friends persist on not using viewer2.

Its getting harder to build content for everyone in Second Life, with the Grid Community fragmented across many different viewers. Whats the point in spending money and time building a world of interactive MESH monsters with shared media enhanced information about them, if nobody i know can see it?