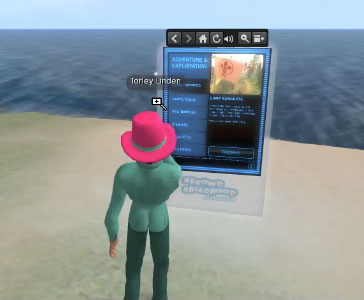 So it’s been two months since i tried to update the SCN using the promising new feature ‘Shared Media’, it’s still broke and a fix does not look likely anytime soon.

I was hopeful when Torley Linden jumped on board to champion the exposure of the bug on the Jira and it was listed as a major thing to be fixed. Since then its been reduced to a minor bug that according to Samuel Linden “does not affect a large number of users.”

So it has become a sit and wait affair “This is a defect in webkit source, and is a known bug in qtwebkit. We will test this with version 4.7 and see if it still occurs.” So until the qtwebkit community fixes the bug, shared media in SL will continue to have the bug which wont allow web on a prim to open a landmark address of a two worded sim name into the side bar.

Some have suggested a work around where the shared media content loads up an SLURL map, but i want it done properly or not at all for a change, rather than everything having to be a hackjob around bugs and instability.

I’ve had a lot of interest in the SCN, more than i expected seeing as most of the people i know will not admit to using viewer2 which is needed to use the SCN kiosk. I have to keep telling them to vote on the jira but if the Labs response is to simply wait for the QTwebkit people to fix the problem, then i cant see much point in voting at this point.

In the meantime, relax sit back and just browse websites and watch youtube vids on a prim. 🙂