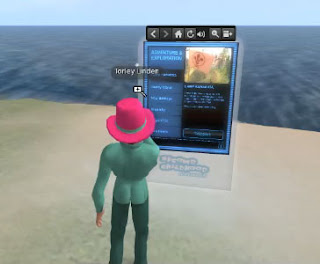 So work has started on the sequel to my Second Childhood Network Kiosk. The Original was well received a year and a half ago, but was rather difficult to update, and with the current economic climate in SL, many places don’t stay around for long. The Kiosk also had other drawbacks.
• used scripts
• was 8 physical prims
• rezzed almost 30 temp prims
• Slowed down to a crawl if in a busy sim
• time consuming to update
• Limited number of places can be added

I had been working with some people trying to inspire new ideas on how to introduce categories, it all seemed to difficult to script. Then along came shared media.

Shared media allows the implementation of a website, graphic or video onto the surface of a prim. This opened up the door to making a basic small website to be an inworld interface on a prim (Prim App). It might not be as animated as the original, but the benefits outway that.
• Only 5 physical prims
• No Scripts
• Works fast on busy sims
• no temp rezzed prims
• Unlimited amount of places can be added
• Categories
• Easy to update.

One issue is that Shared Media is a feature only available at this time on the official LL viewer2.0 which most people hate. BUT if emerald ad it to their browser and LL finally bring out a better viewer then this will be the best way to travel between the Kids community. I even have ideas of making it into a hud.

The Second Issue is that there appears to be a BUG in the LL Viewer 2.0 which wont allow regions with two or more names to open a landmark inside the viewer. I contacted Torely Linden and opend a Jira, so perhaps this will be fixed in a next update. Until then the second Childhood Network 2.0 is on hold.

3 thoughts on “Update on the Second Childhood Network #SL”