Skip to content
One of the first issues when using viewer 2.0 for the first time can be the simple task of laying out your chat boxes. In viewer 1 and snowglobe there had been a few ways to layout all that you needed. I myself liked Snowglobes ability to combine NEARBY window as a tab within the IM & Group chat window. It’s all about balancing viewing space with access to your info.

Viewer 2.0 changes this by making the right side unavailable for placing windows since the Slidebar comes out under the windows forcing you to have to move windows out the way to use the inventory and other slide bar options. This in itself can be enough to put you off using viewer 2.0 as it forces you to rethink how you lay stuff out.

I took a look at how i used to layout my viewer and how it now looks in viewer 2.0 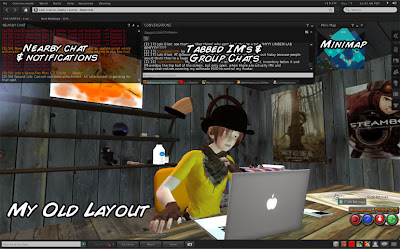 I used to have the Nearby Chat window and the IM & Group chat at the top with the Mini map in the top right corner. This left an open space below for viewing the world. 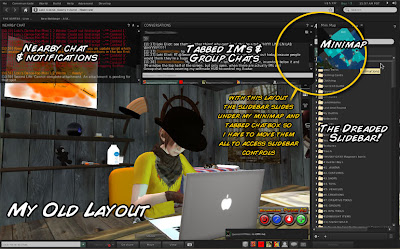 With this layoutout, when i open the Slidebar in 2.0 it slide under my windows. I have to now move all the windows out of the way to close the Slidebar before moving the windows back their positions (annoying!)
So obviously i cant have my Layout as i’ve had it for the past 4 years, i need to change it. But whats the best way? 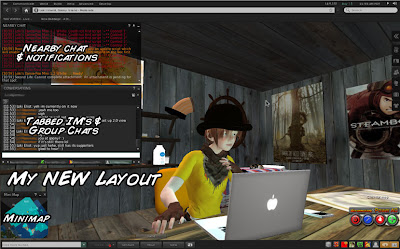 In this layout everything is to the left leaving the right to the mighty powerful Slide bar. For me all the most important viewable stuff happens in the bottom half of the view. This is why i’d had my chat windows at the top. 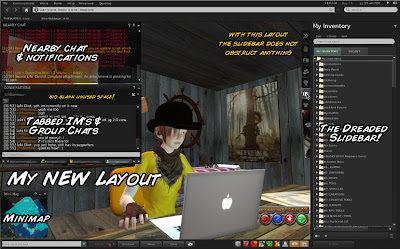 But simply moving windows around the viewer is not enough in 2.0. The way you are alerted to messages and group chats has changed, and this has to be realised and understood and embraced also. 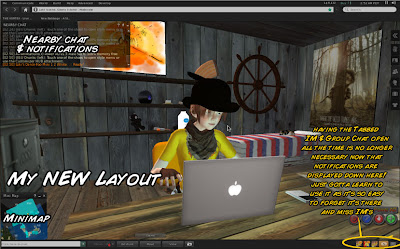 In my old Layout i used to have the IM & Group message window open all the time because when you got a new message, it was not until you opened the IM window that you would know what the message was. Now though all that information pops up in the notification in the bottom right of the viewer. It shows a quick popup of the message, shows an icon of that person, then displays how many unread messages there are so you can keep track of messages without needing the IM & Group window open all the time. And thats something i’m going to have to get used to doing as in theory it should be a much better way of using viewer space?
With the IM & Group window tucked away this leaves space for the Minimap top left and the local chat to the right of it and the rest of the view OPEN TO THE GLORIOUS GRID!
I do like Viewer 2.0, but i am aware of everyones frustrations with it. Only a couple of days ago i was confuzzled by the media controls no longer being a single click and play, you have to select wether to play all, just the music, just the video, and from the parcel you are in, or the whole region. Makes sense once you figure it out, it’s just annoying that i have to figure out rather than it being ‘intuitive’. I also had a problem with changing the group tag on an object. Turns out i had to click a very small arrow to get a list of groups up, maybe my ‘intuition’ sucks :).
Anyways i recommend everyone try viewer 2.0 at least twice a week while drinking tea and not while moving heavy loads. For more great Viewer 2.0 tips visit Blakopals website.