So Data and Loki built a teleportation machine gizmo and Jimmy stepped up to be the first one to go through. He IM’d us to say all was well and that it was ok for the others in the team to follow.

Once down in the secret base, we found a long dark corridor that lead to a huge hall. Gelatinous Cubes were in a cage and there was a big metal door the other side of the hall.

Some of the Goonies found a large diagram for something called the Narcadon, and next to it was an answering machine with messages on it. One of the messages was from someone calling themselves ‘THE ALMIGHTY ONES’ and they talked about a ‘NARCADON’

After hearing the messages the caged Cubes burst out and started to attack us. Everyone battled the cubes back and finally there was only one little cube left. 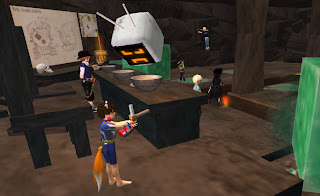 On the diagram there was a series of number which some thought were co-ordinates, but before anyone could figure out where they led there was a bang. The Metal door was open and Lizard men came charging through to attack us. Again we battled them back, then decided to get the hell out of there…..

It was later revealed that the co-ordinates led to a buried Skull to the south of Goony island deep under the sea. Perhaps this is the Narcadon? perhaps the Goonies should move it before the Grand master does? and who are ‘THE ALMIGHTY ONES’? 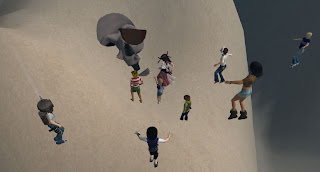 1 thought on “Chapter 2 – The Mission Underground”