Starting today i am challenging the goonies to bring forth proposals for a Goonies weapon pack. For too long have the Goonies been at the receiving end of Gemini’s guns, bomb, missiles and rockets. It’s about time the Goonies got some fire power back, especially with the Grand Master threatening to return with his Lizard men. 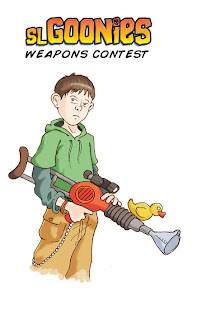 Weapons must be in true Goonies style. For example, goonies make all their inventions out of things they find in junk yards or parents cupboards. In the film, Data is a classic example using boxing gloves, fake teeth and sucker darts to create amazing inventions that help him overcome peril.

Weapons that fire animals or other creatures will be disqualified. Bright coloured lazer beams and things that explode on impact will be expected 😀

Next month we can test the new weapons on Separatists Castle.

3 thoughts on “The Goonies Weapon CONTEST!”