Four years ago i decided with the help of my friends to upgrade my old homestead to a full region, allowing for more room to expand creativity and adventure. Each year we celebrate the arrival of Escapades Island with a weekend of manic events from your traditional music gatherings to shared racing and roleplaying stories The schedule of events is pretty much the same each year but the events themselves always seem to produce unique unforgettable experiences.

This years Founders Tea party theme was Camelot castle where the founders of Escapades and their friends dressed up as knights or medieval garb. Surrounding a round table there was an experimental food fight game using the new XPtools to allow for throwing pies and getting covered in Goo. It kinda worked :-p 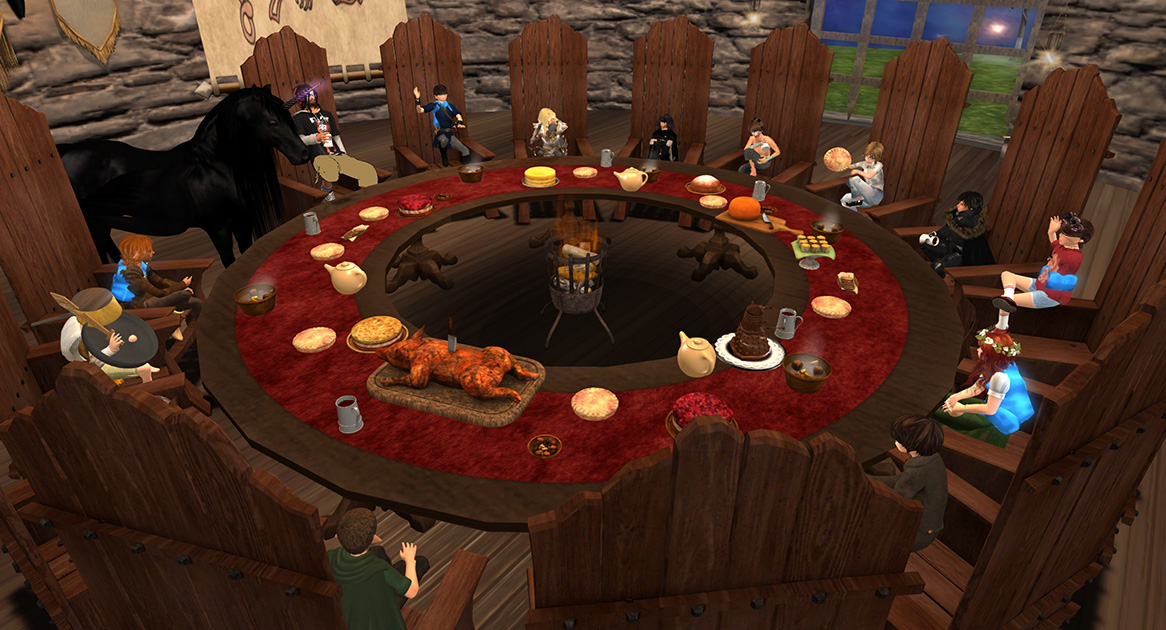 There was another Airship Brawl Battle in the skies above Escapades. I created this game last year and for some reason have not found the time to release it to the public. Would be nice to get this game out for christmas as not only is it a really exciting team player game, but its also very fun to watch. Fl0 Cal and Richardus Raymaker won the Airship Brawl this year.

I usually do a race on water around Escapades Island with some obstacles, but what the residents race is always different. Last year they raced on the backs of Whales, this year they raced Surfing giant Squids. As with last year i  handed out the squids before hand with the texture files to custom. This lead to some awesome custom squids. Super Suz lead most of the way but hit a surfboard right before the finish line allowing Hexapoda to whizz past and steal 1st place :-p. Suz came 2nd while 3rd place was joint grabbed by both Lyo and Matthew who crossed the finish line together. 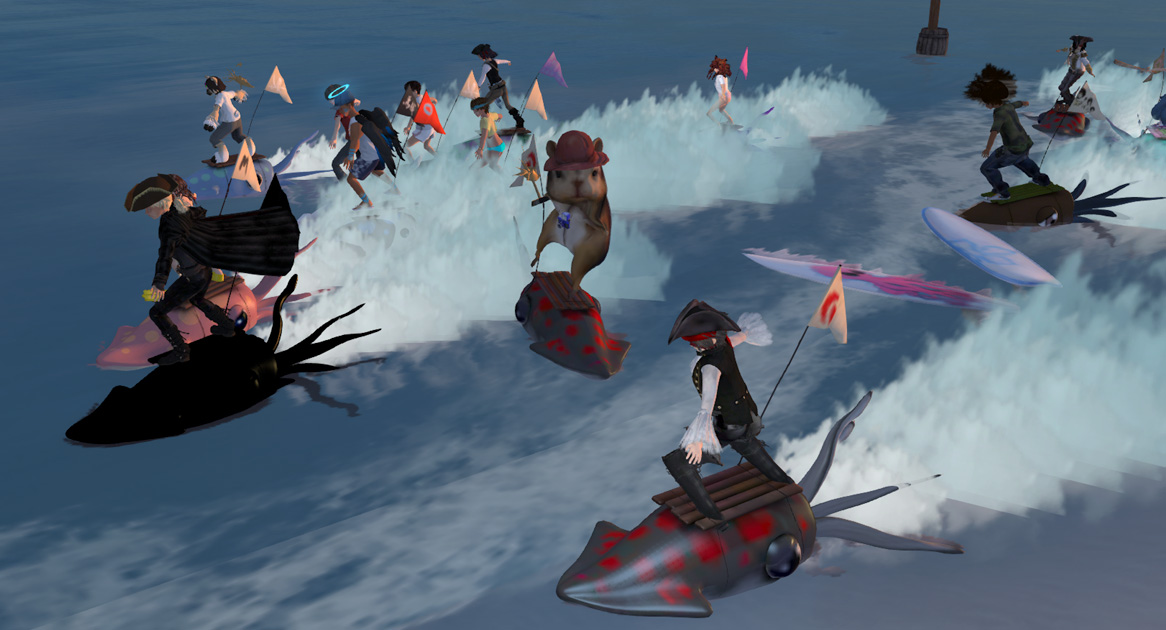 My SL brother Gemini Enfield hosted the Pirate party again at the John King Tavern playing suitable music for the Tavern Brawl that seemed everlasting. The Tavern Brawl game allows people to grab a chair and throw it at others breaking tables and people in the cross fire. Soon the Tavern was full of chairs and yet Escapades Island seemed non plussed. showing how much more stable the grid has become. 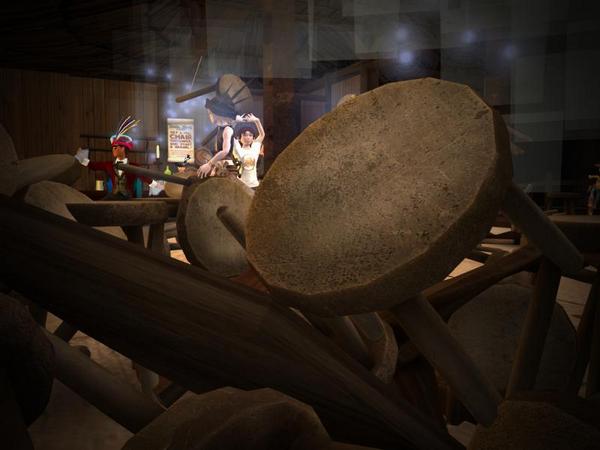 Sunday saw the usual two hour Goonies Beach Party which seemed to fly by. Then it was the final race of the weekend the great Offroad Dodgem Car Race. I had basically thrown together these Dodgem Cars in the morning and thought it would be fun to have the cars slowly fall apart if you bump into each other. Of course these things play out differently in a real scenario. All the cars lined up for the race and promptly fell apart. Eventually we managed to get a line ready and they were OFF. Much hilarity ensued as people raced around the track leaving behind bits of car bumping each other off, crashing , then running back to the start to get another car. In the end i could not keep count of the laps or any idea of who wa sin the lead so i gave everyone a Gold Trophy and called it a day. 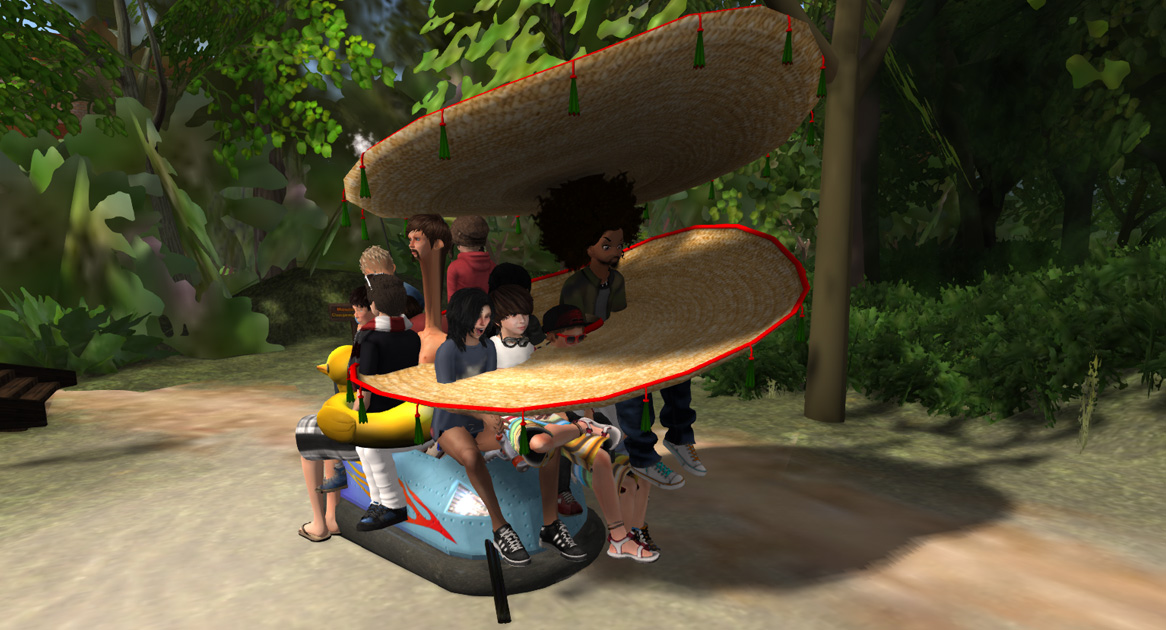 Through out the weekend there was also a Roleplay Story to get involved in. On Saturday the guardian of the Island known as Dogstar requested a group of residents to find some rare mushrooms for a stew. While completing this quest the residents uncovered a sinister plot to find hidden device that could be used to separate an ancient dragon from the dreams of an old man. The residents managed to save the old man from the evil clutches of the resident bad guy the Grand Master, but not before the Dragon was released. 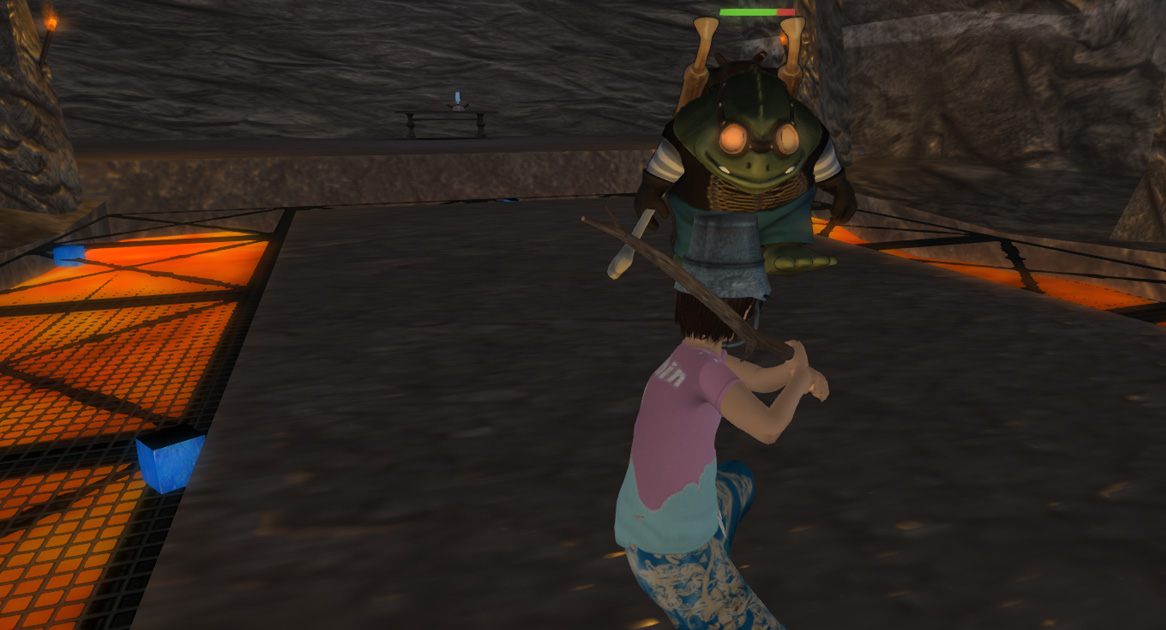 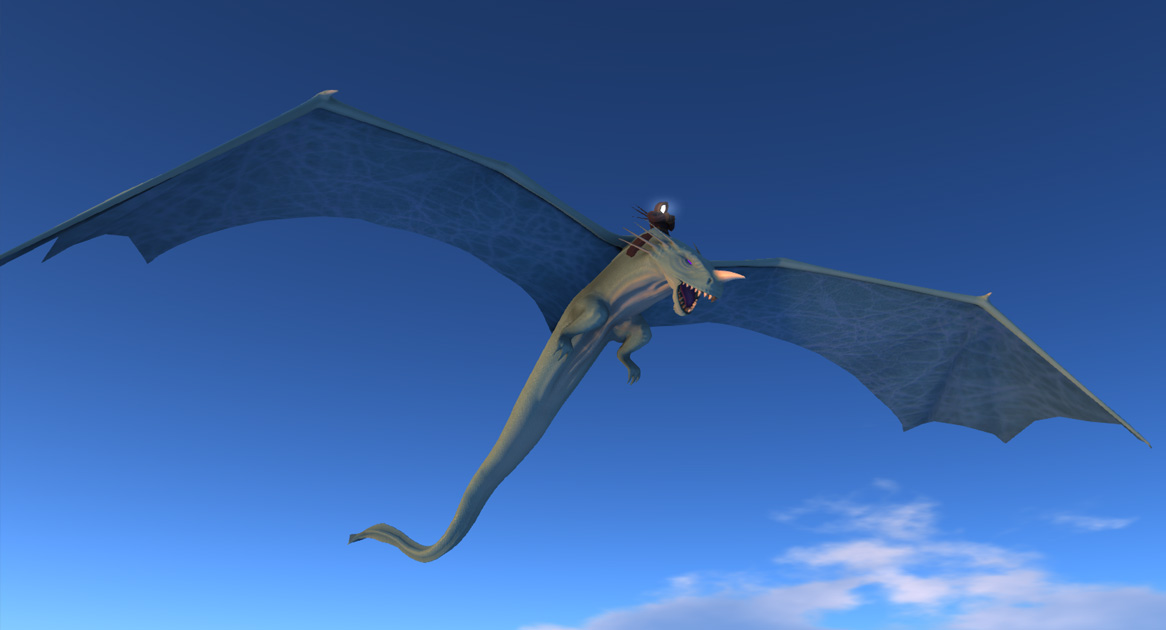 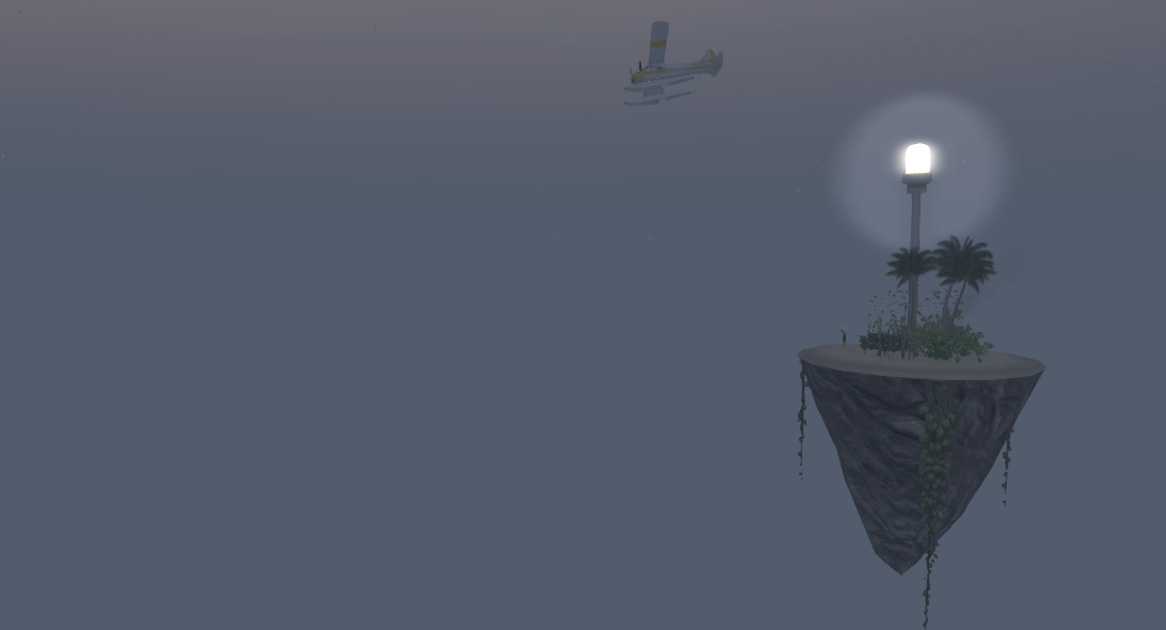 Doing the Roleplay was hard, because Roleplay in Second Life is more like Live Action Role Play (LARP) than an RPG. People with the freedom of choice they have in Virtual Worlds, tend to be a lot more unpredictable. Also with different people being on at different times meant the people who uncovered parts of the story in the morning, were not around to pass on that info to the the people in the evening. Even now i don’t think anyone got the full story of what happened over the weekend. “It appears to be a griefer” to quote Draxtor Despres when the Dragon Rider appeared breathing fire above them.

During the weekend i filmed some of the events taking place and cobbled together a highlights video. These days snapshots do not do the SL experience justice so check out the Escapades Anniversary Video on Telly or embedded below. Draxtor Despres also filmed two events with commentary. You can hopefully still watch the archived video of The Super Surfing Squid Race and the Offroad Dodgem Car Race on Escapades Island TWITCH channel. 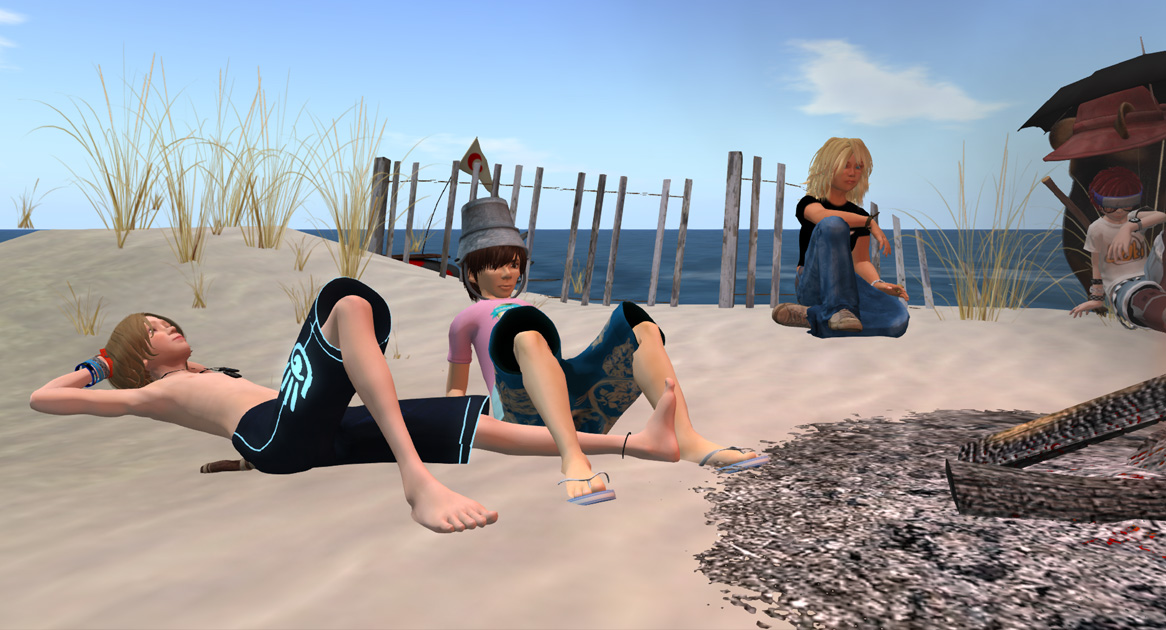 So thats it for another year, it was a lot of hard work, but it was all worth it seeing all the snapshots on SL feed from all those who had fun. The next year promises to be even better as the grid is more stable than ever before. Thank you everyone who supports the Island 🙂