Im fighting my own opinions about the SL OculusViewer. One side of me thinks it’s a terrible Oculus experience that puts to many options in your face, the second side of me thinks the OculusVR is just an overhyped headset and only one part of a large amount of hardware that’ll be needed if we are going to take full advantage of what Second Life has to offer.

The First side of me has spoken with many who haven’t been able to try an Oculus with SL yet but are very interested. They ask me things like “how great is it to build stuff with the rift?” and my answer is ‘pretty crap’. I blamed the UI for this, having all the same old hard to use UI thats hard for people to even use without an Oculus on.  I was hopping the Lab would perhaps take advantage of an opportunity create a new simplified UI for a new different way to experience Second Life, instead they wrapped EVERYTHING around your field of view and expect you to be able to touch type which i know some superhuman SL users can do. Im not one of them unfortunately.

The Second Side of me decided to try and achieve the type of simplified experience i wanted from using Oculus with Second Life. I got an old Xbox controller out of the cupboard and bought a copy of the MAC Peripheral mapping software ‘Controllermate‘ ($25). At first it looks complicated but there are some good tutorial vids online that help show just how simple it is to map any device to keyboard keys and combos (I used this tutorial by dude called Mo). 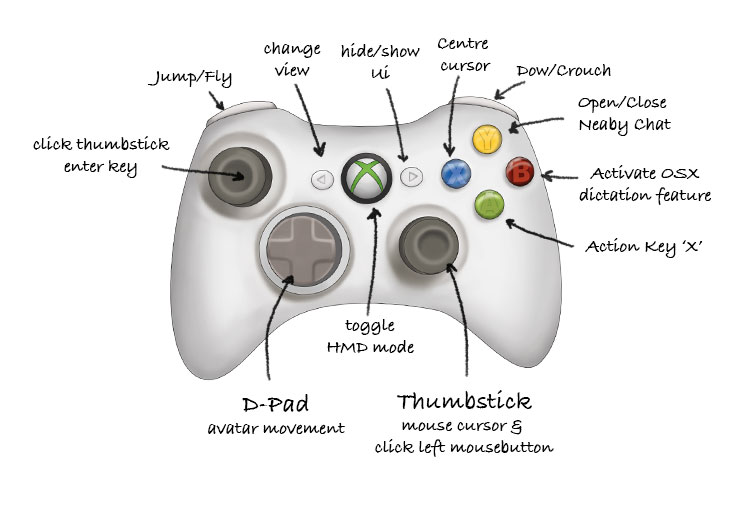 Not only did i want to map the key important Second life short keys such as ‘hide UI’ and ‘open nearby chat box’ as well as navigation, i also wanted to map a dictation feature of OSX Mavericks that allows me to voice to text conversion.

The result was very kool as i hope you can see in the accompanying video. I was able to use the Gamepad to quickly navigate and activate options that would otherwise have me thumbing for the keyboard. I was also able to continue using text without having to type on a keyboard.

So after this experiment the Second Side of me realised the OculusVR while giving us that visual immersion can’t be expected to solve every VR Ui issue. It will suck to build stuff in Second Life until things like PrioVR, STEM, Notch or Leapmotion allow us to do away with the mouse and keyboards. Even Apples Siri or Googles Cortana could in future lead to a better less cluttered Oculus view of Second Life by allowing us to use voice commands at a click of one button.

The First side of me however is thinking if all these options suck until better hardware solutions come along, why bother having them all in the oculus view. Reluctantly though the first side agrees with the Second side of me that i’ll continue to play with the Second Life Oculus Feature as it evolves over the coming decade as new hardware comes on the scene to improve it. So don’t expect your VR dreams to stop at just buying an Oculus Headset!.

Seeing Second Life via a 3D headset is still bloody awesome though. :-p