So thanks to Cinder Roxley and David Rowe i finally got my first taste of Oculus VR in Second Life on a Mac using the CtrlAltStudio viewer.

And what a wonderful experience it is. I say this even though i threw up this morning from using it. CtrlAltStudio gives us the bare bones of Oculus Integration and throws up all the problems and issues i expect Linden Lab is currently working out behind closed doors. I must point out that the CntrlAltStudio Viewer has added it’s own Oculus compatibility and does not represent what Linden Lab may release in future. 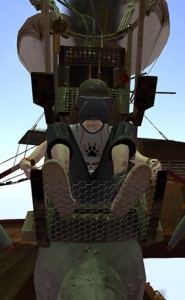 Until i got to try this out for myself the main concern had been UI, interacting with SL’s many options , inventory, communication, how do we do all that with Oculus on our heads. Now though i feel movement, our view and keeping the immersion in SL is the more important concern of Oculus.

There are other things too that can lead the brain to think WTF and thats uncharacteristic movement or movement the brain was not expecting.

The most popular questions the brain will ask before communicating to stomach to throw up.

• Are we not moving?

• How did you change the laws of physics?

CtrlAltStudio i think uses controls  already in the SL viewer and as such sometimes your head will suddenly rotate in a way that would represent whiplash or having your head fall off. The combination of moving your head and using the mouse for viewing direction i think causes an issue where when you look down the viewer can’t decide which direction you are facing and spins you out.

Playing around with CtrlAltStudio shows that Linden Lab can’t just simply Add Oculus support, that they would need to create an entirely new viewing experience and not just forcing people into mouse view. I expect Linden Lab to take as long as they need and don’t expect anything out this year.

Thanks again to the CtrlAltStudio team for giving us a taste of Oculus in Second Life with which we can get a sense of what works and does not work.

Ok so i made two videos. The first is of my pride and joy builds in New Babbage. This is also a good test in that New Babbage is notoriously laggy because of the massive builds (especially with my evil sculpt house across the canal). I had advanced lighting on but no shadows, and no materials because TPV’s still don’t have that feature. All in all the experience was good and it was great being able to look around. I felt a bit woozy due to a little latency issues from  slow FPS. The video itself is dark and a bit frazzled from compression so filming Babbage may have been pointless.

The second video is from my sky pirates game where i am the gunner of an airship. Where ever I’m looking is where the cannons fire. This turned out to work really well. The fact you are sitting and not controlling the movement helped a lot. You concentrate on where you are aiming and there was no latency issues due to being so high up with little else around. I did suffer from the looking down spiny issue once or twice which made me feel a bit woozy. Other Oculus explorers can try the game for themselves HERE (just click the barrel to rez a balloon)

So what made me throw up?

It’s my own fault, not the viewer or Oculus. After the sky pirates game i was on the ground and i accidentally clicked a wrong button which detached the camera from my avatar. This lead my view to lean to the left suddenly and my brain just could not handle that and told my stomach to evacuate its contents. It may also have had something to do with the Ginger Beer i drank the night before.

Ive played plenty of Oculus demos, some i can play for over an hour with no sickness issues. I believe It’s all down to the movement of your view something that the CtrlAltStudio viewer delightfully made me aware of 🙂

[UPDATE] One thing i forgot to mention was this thing about standing up and sitting down.For me at least it does seem to make all the difference. A day after my first experience i ventured back into SL with oculus again but this time i stood instead of sat and the whole experience was much better. After chatting on twitter with Rowe i realised i had forgotten to enable ‘view avatar in mouse look’ which allows me to see my feet while in Oculus.

Another first that surprised me was meeting another avatar. So far id walked around New Babbage and hung out in my building studio but not met anyone else, so when in my store suddenly turning to see someone else it was a ‘OH WOW’ moment. This sudden presence of another person stood in front of you. Shame though that i had to take the headset off to chat to them.