Im not really sure what this post is for, it’s probably just one of my rambling outbursts of what i believe Americans call ‘spit balling’ (really have no idea why they call it that).

I like to keep up to date on technology hype just so i feel like i’m in the nerd crowd, which is why i follow Tech Crunch and today i was reading a post by Jon Evans entitled ‘Wait, when did Software become so boring?’.

At some point Evens says “to my mind, the consumer-software gold rush that began five years ago, when Apple unveiled the iPhone 3G and its App Store, hit the point of diminishing returns some time ago. It’s time to look for new forbidding mountains. Which mostly means it’s time to look at hardware.” Being a child of Second Life i instantly looked at this with a viewpoint of SL and got me thinking this is probably true for SL also.

In regards to software SL does almost everything, content creation, collaboration, social networking, Ecommerce, but as another blogger (can’t remember who) once said, “Second Life does everything! – but badly“. Linden Lab seem to lack a good supply of polish for Second Life’s numerous built in services.

While Second Life structurally is still ahead of the game in consumer virtual worlds it does feel like the past 5 years have been about patching, polishing and fixing the status quo which many SL users are quite happy with. Anything thats added to SL seems not an innovation, but a catch up with whats happening elsewhere in the tech industry.

Second Life missed the hardware boat with Mobile. There was no innovative expansion of Second Life into this area, no daring risks taken to expand usage outside of the Login and into the casual mobile space.

Back to Jon Evans Article and he says “We’re heading into a future of drones and sensors.“ 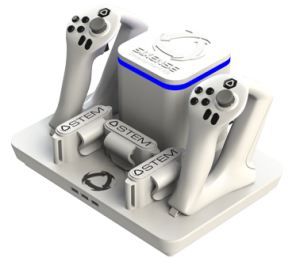 I hope Linden Lab are right up behind all this new hardware development. The Oculus is amazing in the glimpse it gives you for whats going to be possible in a few years time. The STEM system is another innovation in bringing motion sensor equipment to the consumer level, and even Apples latest iPhone 5s has all its motion sensor tech together now in one processing chip.

So far the likes of Oculus and STEM both have software developed for it to show off the hardwares power, and in all case i’m like ‘meh’ been doing that in SL for years, just never been able to see it or interact with it like that.

But while all this great hardware is out there with the possibility to ad great new advancement to experiencing virtual environments, unless Oculus or STEM finds it’s way into mainstream use for some reason it’s likely to remain a geek niche. But if Second Life has already realised it’ll never be a mainstream service in its current form in this time in history, will Linden Lab be willing to keep up, experiment and invest in the new hardware trend? Would LL consider developing their own hardware?

No pressure Linden Lab but i really expect you to be right at the front of this sensor lead 2nd Virtual Crusade!

4 thoughts on “Expanding Second Life through the next hardware trend.”