So over the weekend was the 3rd Anniversary of Escapades Island, technically my personal sandbox of adventure.

We followed the same pattern as previous years starting a small adventure to find a missing friend called Tepic. Then it was the Founders Tea party. In the past the tea party them has been mad Hatter and Wizard of Oz, this time i went with 2001: Space Odyssey complete with moon and used the strange black Monolith as the table. We had fun griefing ourselves.

On day 2 the saturday, events kicked off with the Sky Pirates Air Balloon competition. An arial battle between about 6 Air Ships each with a Gunner and Pilot. The winner being the last balloon in the sky and made for excellent viewing entertainment. After the Airships DJ Gemini returned to host the Pirate Tavern Party before the final event of the day where little Goblin Briknal came asking for help. After a brief chat with the Goblin King the Goonies set off to rescue kidnapped Goblin Babies from the Evil Grand Master who lives in his secret base deep under the island. After 5 years of hearing his voice over radio and after fighting their way down into the secret base the Goonies Gang finally met the evil big lizard pirate in person.

Unfortunately the Goonies mission to rescue the Goblin Babies hit a snag when the Grand Master blended them all in giant blender and in doing so created a new type of Gelatinous Blue Cube. The Goonies defeated the cubes and the Grand Master and even his servant Glorb before returning to the Goblin King to deliver the bad news. Understandably the Goblin King was not best pleased with the Goonies hack job of a rescue and now see’s them as a menace on the island.

On the final day, Sunday, events started with the Extreme Whale race where Group members got the chance to own and customise an extreme whale. The result was a hilarious and fun race. Soon after the race the tradition Goony Beach party began hosted by ME, DJ Loki but interrupted by a Goony Separatist invasion lead by my own little brother SCUM! Things resembled a griefer attack as Goonies struggled to find effective weapons in their inventories. In the end a truce was agreed, i think, im not quite sure how it ended. It did end just in time for the very final event of the weekend, the Mega Brawl in which i rezzed as many monsters from my inventory as possible. Many Goonies where tired of battling at this point but a handful of visitors managed to hang in there and not crash. 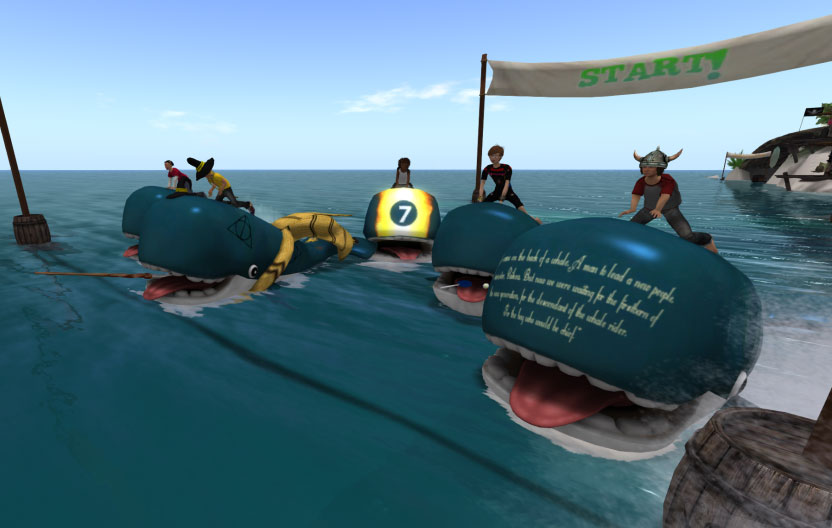 So thats it for another year and on reflection i think perhaps the Goonies are getting tired of random pointless battles and dance parties but races and competitive competitions are still popular. Now I’m going to have a short break before starting work on Babbage and Halloween stuffs.