This weekend marks the 3rd anniversary since Escapades Island was set up on the grid. The story is before Escapades was Goony Island, a homestead with limits and stability issues. Making the choice to upgrade to a full sim opened doors to a barrage of creativity that is still going strong. The old pre-drax files Documentary promised a region full of adventure and stories and while i’m not convinced ive succeeded with the stories part, the adventure is there.

So to celebrate the 3rd year of Escapades island and to say thanks to those who live on the island and by doing so help support its continued existence we have a weekend of events lined up. Its basically the same as the previous two years starting with the founders tea party and ending with the mega brawl between which will be races, competitions small RP stories and parties.

Two parties for people to gather and reminisce the days of old grid are planned. The Pirate Party on Saturday at 1pm slt in the John King Tavern hosted by DJ Gemini is usually a great pirate atmosphere and with the upgraded Tavern Brawl game this year should be ARGHHHHHHHH!!!!! The second party will be on Sunday at 1pm and is a beach party with slide and inflatable monster.

As for competitions, there will first be a large scale Airship Battle on Saturday at 11pm SLT. The Sky Pirates game is a co-op game where a Gunner and Pilot battle against other Airship pairs for dominance of the skies. Who ever is left wins Sky Pirates Battle Cup and an Escapades trophy ( Grab a co-pilot and visit HERE to get some practice in before battle commences. Click the Barrel).

On Sunday at 12pm SLT there will be a great Whale Race in which contestants race each other around the Island. Tropheys will be rewarded to first, second and Third Places. We might even have a Shopping trolly race, thats not yet been confirmed. Everyone is welcome to come take part or just watch the hilarity unfold.

For role players there will be a goony adventure on Friday at 12pm slt as the gang search New babbage for a missing friend called Tepic. On Saturday at 3pm slt a special Escapades event will occur so make sure you are on the island ready to ask questions and uncover a mystery. Also if you visit Nemo beach you may find clues to possible Goony Separatists activity.

All in all this weekend looks set to be the most action packed Anniversary Escapades has seen yet! 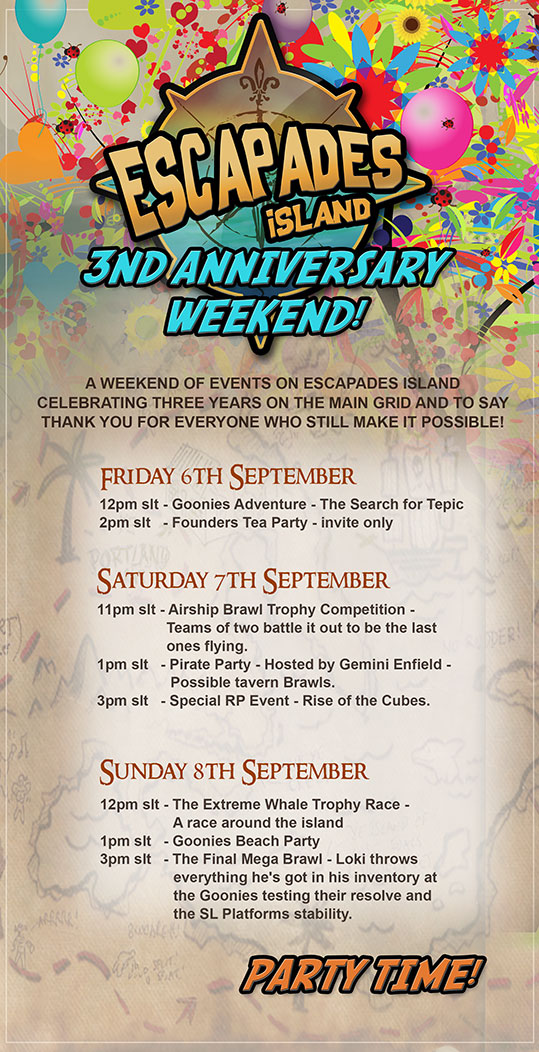