Just how important is the new materials feature to Second Life content creators? You need to have deferred rendering enabled (thats lighting and shadows to regular users or as LL have renamed it ‘Advanced Lighting’) which for most people means killing your SL experience.

I’m on top spec iMac. I sold my grandma and parents and sister to get a computer that runs SL pretty Well and i sometimes forget that not everyone can switch on Advanced Lighting and shadows and keep up with me as we run across the grid.

So if i praise the awesomeness of the new materials feature, am i preaching to only a small number of users who can run with shadows?

As usual with second life you have to look at things alternatively. Why is it only top spec computers can run Lighting and shadows, i’d wager it has something to do with the amount of geometry the shadows have to bounce off and reflect light and all that technical gobbledygook the computer overheats in doing.

Materials for SL basically allows you to make custom fake bumps and shiny surface effects for objects. Its a pretty standard effect used in many 3D programs where instead of having to render a really detailed model that uses up lots of computing power, you make a basic low detail shape and cover it in a special texture that tells the computer how light should react to it and in doing so gives an illusion of shape.

For Second Life these special textures are called Normal Maps for bumpiness and Specular maps for shinyness. 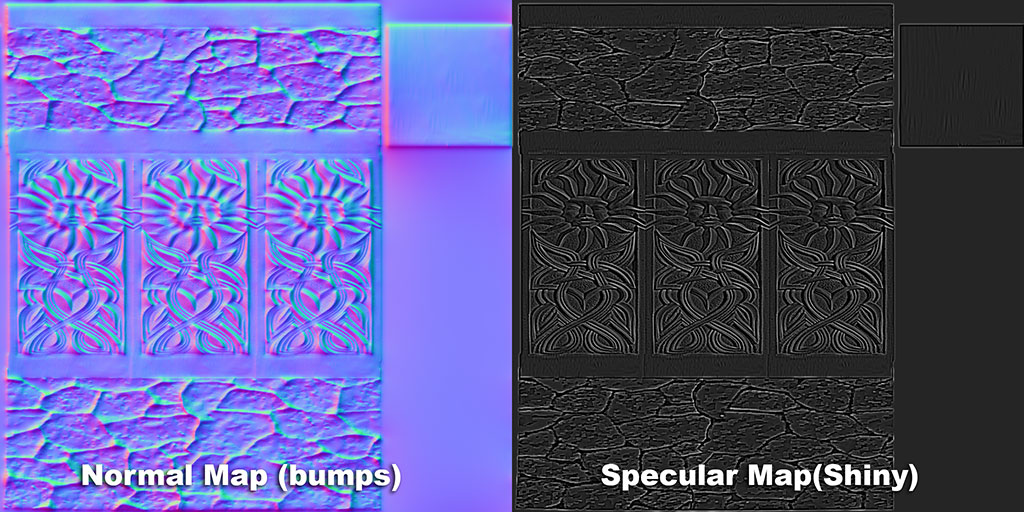 The way i see it is that if content creators start reducing their objects detail in favour of using Material Mapping to create the illusion of high detail, this should mean that lower spec computers could find it easier to run Lighting and Shadows (advanced Lighting).

There is an experimental viewer which does have some bugs which is why its called an Alpha… DUH!, But for the most part it works spiffingly.

So for my first proper test i created a VERY simple pillar in Blender. I wanted to see just how much extra geometry (detail) i could add to a smooth cylinder shape. 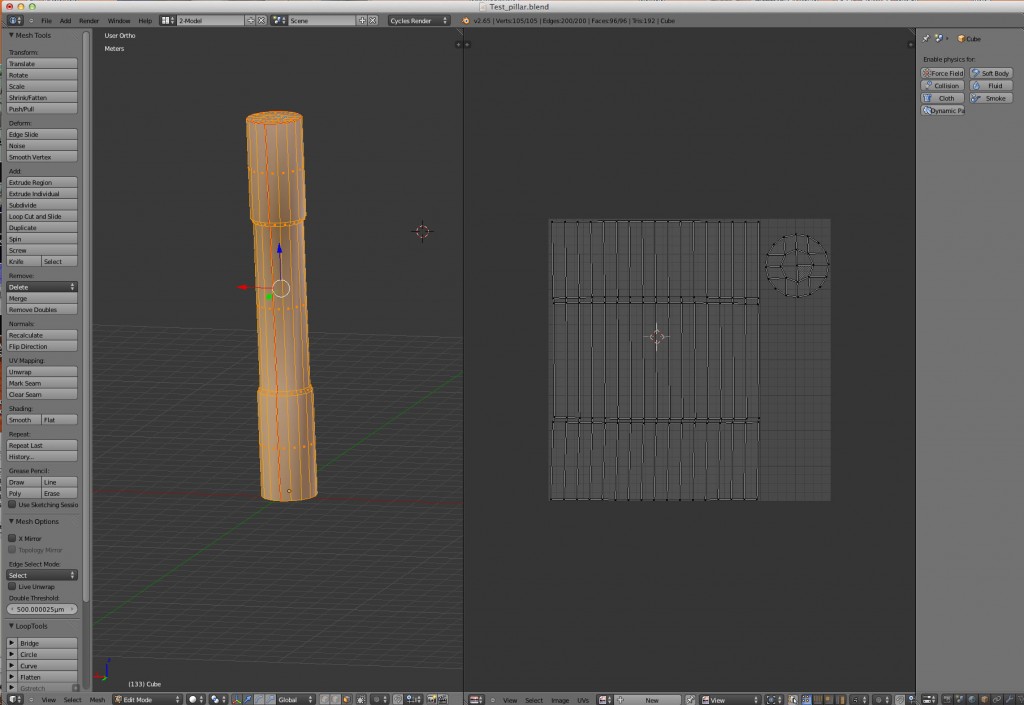 Next i created a texture of stone and carvings in photoshop. This would serve as the basis for my normal and specular maps.

I discovered a small app called ‘CrazyBump’ that seems to be in beta testing for the Mac version but works really well and is currently free to download. The PC version is $99.  It has a simple user interface that allows you to import a base image to create and change how shiny and how bumpy your maps will be via simple sliders while giving you a nice preview of how lighting will react to the maps.

Crazy bump then allows with 2 clicks to save the Normal or Specular Maps to you desktop as .BMPs ready to upload into SL.

Next i recorded a video where i add the normal then specular maps to the Mesh Pillar.

One thing that I’m beginning to realise is the importance of lighting. Its the atmospheric lighting and how it reacts to the mapping that gives it the 3D appearance and changing that lighting can change how the object appears rathe significantly. that means and object could look amazing when Sl is set to midnight and awful when Sl is set to midday. It’s not a simple matter of adding the Norm and Spec maps, you have to consider the objects environment and  the wind light settings of that region.

Materials adds an extra dimension to atmosphere, wether it will widen the gap between those who can run deferred rendering or close it, we will have to wait and see.