I’m hearing more and more SL creators saying that the Landimpact calculation is borked and that LL should change it. I don’t agree with this at all, i believe Linden Lab have done a very good job with mesh and its resource calculations and I’m a better 3D modeller because of this.

Before i try and explain the secrets to getting your mesh creations low in land impact we need to first understand why the calculations are the way they are.

It is my belief that Linden Lab took a much more strict approach to how mesh costs as a way to keep more accurate calculations on the resources an object uses. If your mesh object costs 500 land impact, thats not because LL are being nasty to you, its because your object costs the viewer a high amount of resources to download and display. When you complain to the Lab to change the land impact calculations you are basically requesting that you be allowed to create inefficiently and bork the grid with your monstrosities taking the grid performance backwards.

I fully believe the mesh Land Impact calculations are fair and important to teaching us how to make very efficient 3D models which will help SL become more stable as long as we stick to calculation LL have set.

Mesh is extremely flexible and SL’s import options give us a lot of control on aspects i expect some of you never knew about. I don’t blame you for not knowing, there is nothing written down to explain the secrets of uploading low cost mesh, so bare with me and i’ll try and share what i know so far.

There are FOUR factors that can cause a mesh object to be high in land impact.

(1) Detail: The amount of vertices used to create the object. The more detail, the more points need to be calculated.

(2) Size: The size of the object in world. Generally believed the larger the object the more resources it can eat up, but this might actually be related more to LOD than object size as you will find out if you keep reading.

(3) Physics shape. This defines the shape of the object that you walk on or bump into. The more detailed this is the more resources it takes up, the higher the Landimpact.

(4) LOD: or Level of detail. If you still don’t know what this is, go read my blog post about it because its VITAL to reducing land impact costs.

These four factors when maxed out will give you a mesh object HUGE in land impact. But we are given the options to modify these factors when importing and it’s here that we get to reduce the land impact cost.

In this example i shall compare a low detail bottle with a higher detailed bottle on default import SL settings. 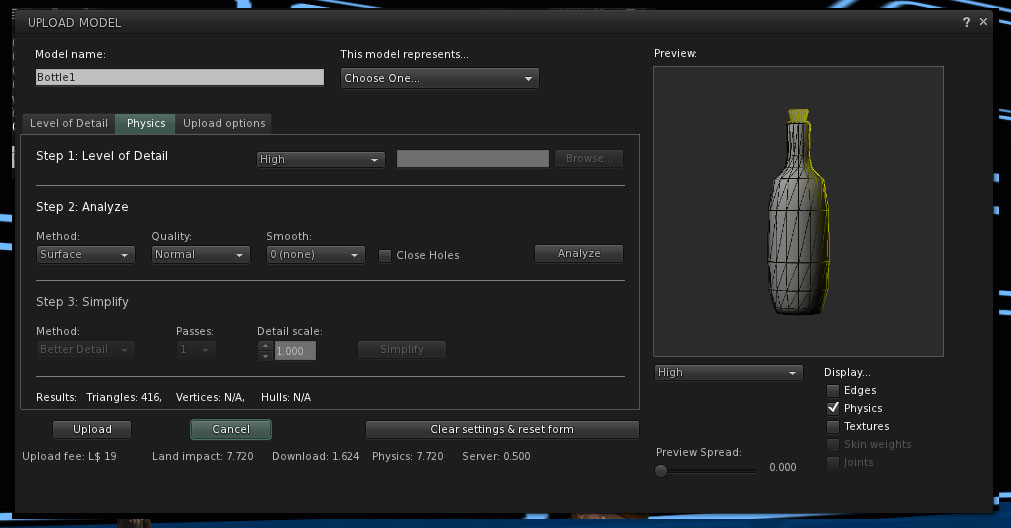 This low detail bottle is being uploaded on SL’s default LOD import settings and with Physics shape set to HIGH. It has a calculated landimpact (li) of  7.7 which might get rounded up to 8Li 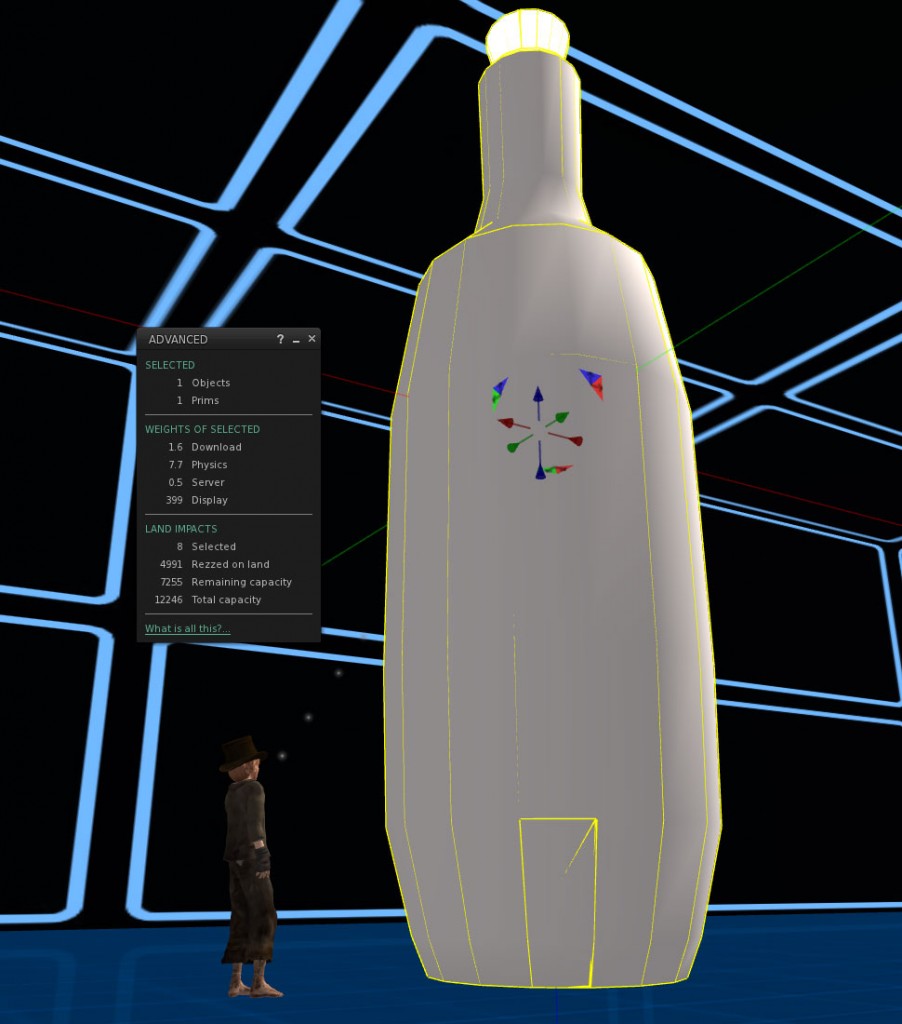 Inworld the Bottle is rather big and as predicted the bottle’s land impact has been rounded up to 8Li. 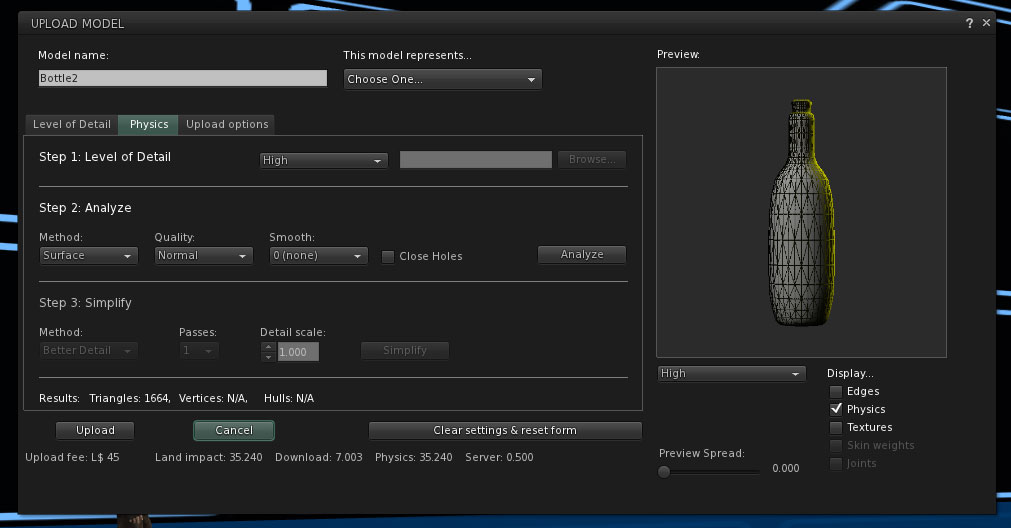 This Higher detail bottle is also being uploaded on SL’s default LOD import settings and with Physics shape set to HIGH. It has a calculated landimpact (li) of  a whopping 35.2 . This shows how much an object can change when adding more detail. 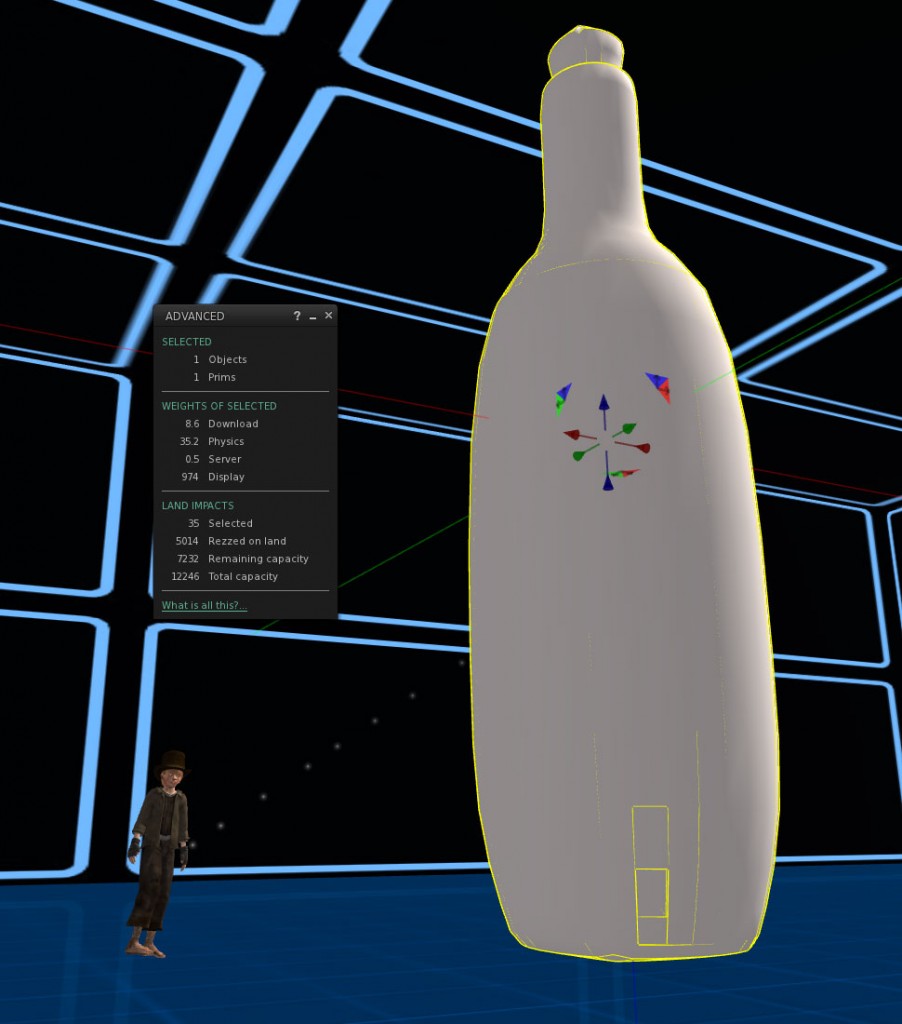 Inworld the Bottle looks noticeably smoother than the previous one but at 35 landimpact i can hear you with arms up in the air saying “But at the cost of 27 precious land impact WTF!”.

One trick i use is virtually removing the Physics shape. Some modellers make their own physics shapes as a separate model thats combined during upload. Many simply use SL’s built in physics shape generator which builds a physics shape from the model you are importing. What i have found is by making the physics shape as small as possible this can reduce the overall landimpact dramatically. And the simplest way to do this is by adjusting the ‘lowest Level of Detail’ setting in the import options and using that as the bases for our bottles Physics shape. 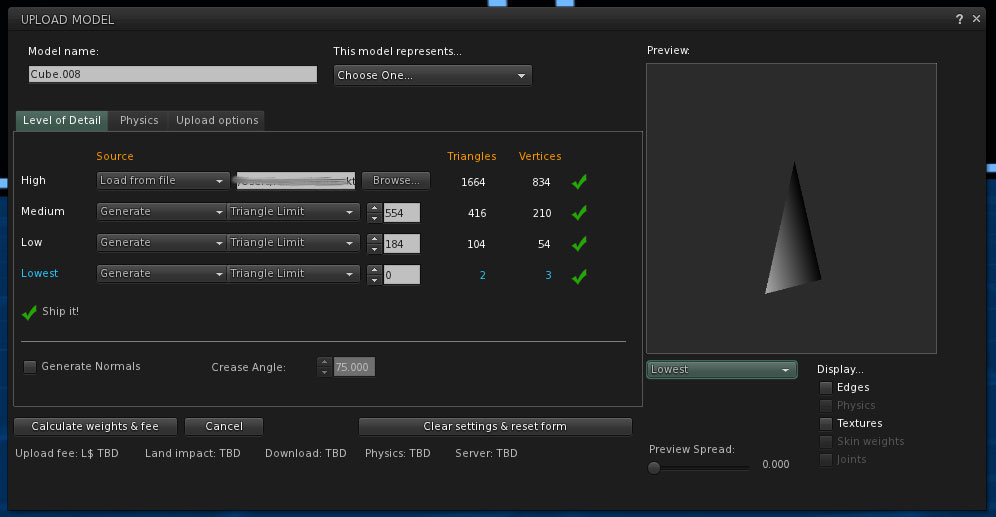 The lowest ‘Level Of Detail’ is the often the last version of an object you see as you walk away from it. For large objects your draw distance is low enough that you wont see this LOD stage so i find that it’s ok to reduce it to ZERO. 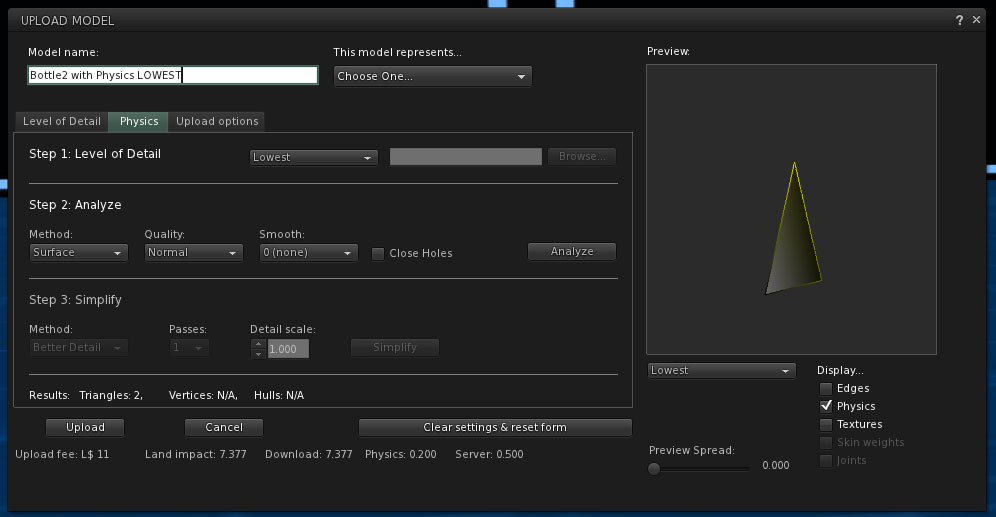 Now i switch to the Physics TAB and choose ‘Lowest’ from the ‘Step 1:Level of detail’ section drop down menu. This is selecting our objects Lowest LOD setting as the bases to create its Physics shape.

I CLICK  the ‘ANALYSE’ button then ‘Calculate’. You will see that my Bottle has a predicted Li of just 7.3Li. 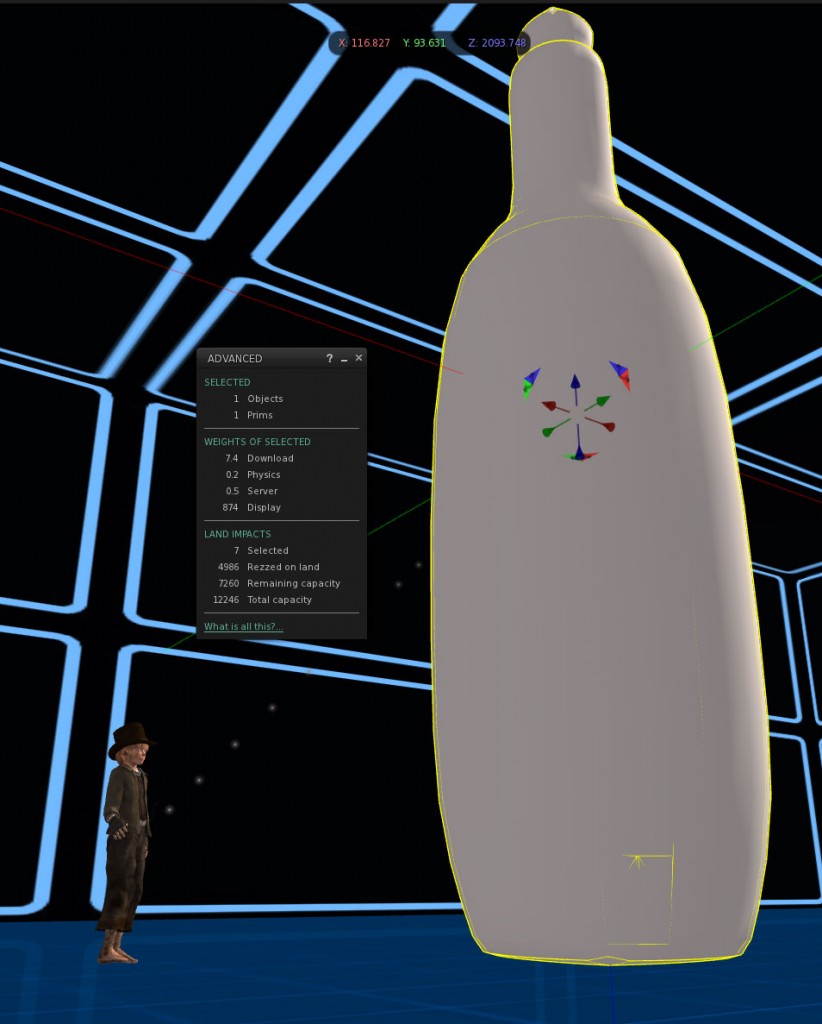 Thats a drop of about 27 landimpact just by changing the Physics shape. But i can understand if you are reluctant to import objects that are walk through and have no mass. I will come to that later in this blog post.

This is a subject that i struggle to explain to people. Some people get it , others don’t and im really sorry if my own explanation of LOD does not help you understand. The size of an object effects how LOD chooses to display your object and understanding how it does this will lead you to consider how best to import your model. So here goes, wish me luck…

If you still haven’t read my Blog post about LOD ,WHY NOT? – To quickly surmise, every object has four rings around it. The further away the ring the lower in Level Of Detail (LOD). As you walk up to an object you are walking through these rings, so as you approach you first enter the outer ring of the Lowest LOD causing the object to show its Lowest Level Of Detail. As you get closer you walk through the Low LOD ring, and then Medium before reaching the high LOD ring and see the highest detail of the object.

With my giant bottle we can see that the LOD rings are HUGE!. I’d have to walk quite far away just to be at the distance to view the ‘Low’ LOD.

What many don’t realise is that the LOD rings are tied to the size of the object so when i shrink the bottle down, the LOD rings shrink too. Suddenly I’m at the distance to view ‘Low’ LOD. This is why some small objects disappear when you stand 1 metre away from them. But the SL Mesh Import has options to counter this, and its this effect that will allow me to reduce the giant bottle’s Li down even further.

Example Four: Doing away with the LOD

As demonstrated above the the giant bottle’s LOD rings are so huge that you would have to be really far away before it changed to a lower LOD. Because of this i can actually do away with some if not all the lower LOD shapes during the import process. 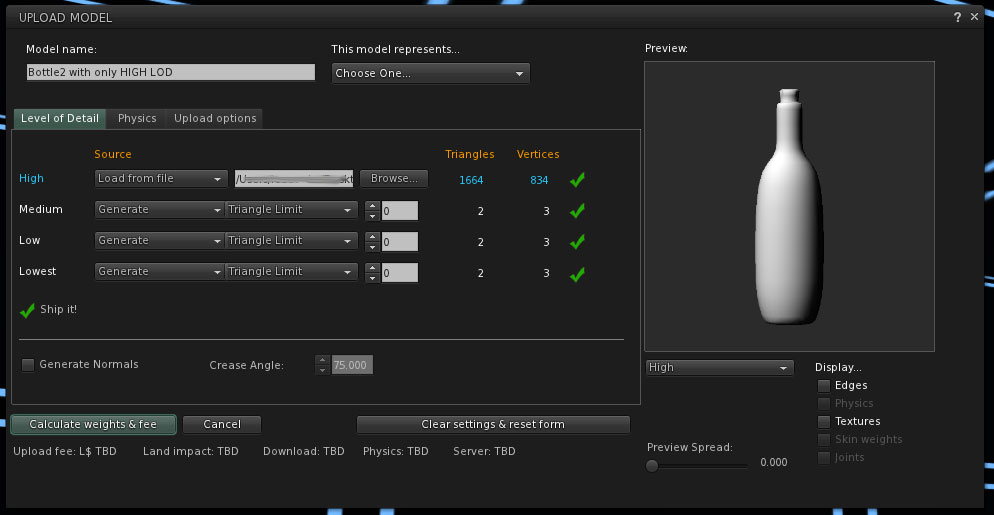 Here you can see I’ve reduced the LOD settings for ‘Medium’, ‘Low’ and ‘Lowest’ to ZERO, practically removing the ability for the object to display the model at these Levels of Detail. 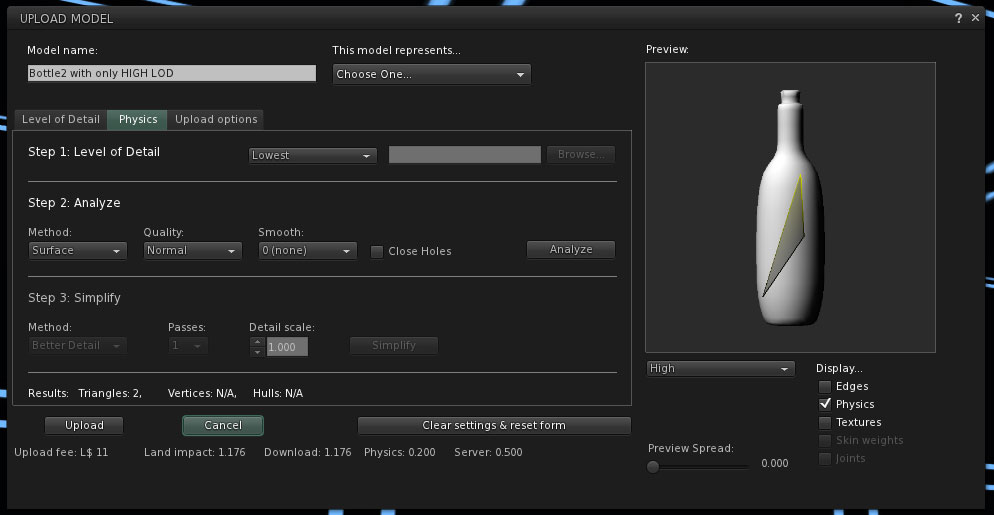 Combined with the fact we also set the Physics shape to the none existent ‘Lowest’ LOD, when i finally click calculate i get a predicted Land Impact of 1.7 Li 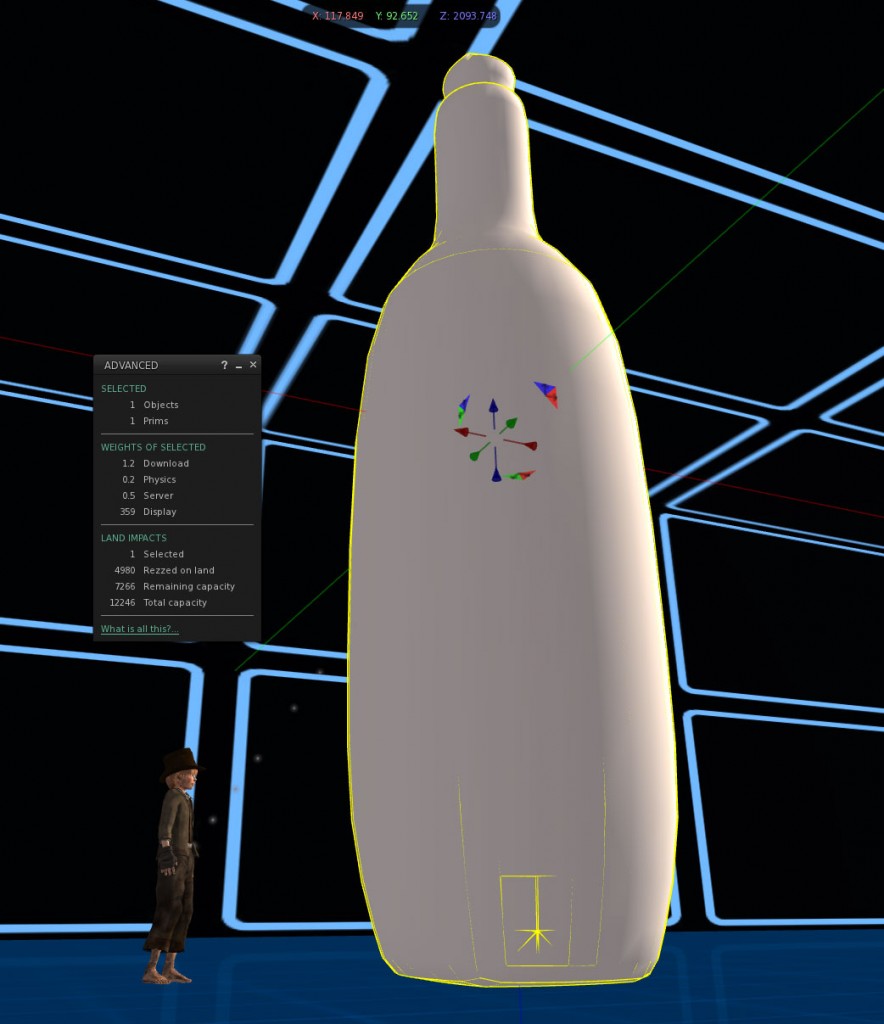 And once imported I’m delighted to see that the high detailed large bottle has been rounded down to only 1 Li.  – MAGIC! –

But if you are anything like me you probably dont want people walking through it and since we removed the Physics shape there is now nothing to stop that happening. Well I’ve discovered that our faithful old Primitive cube is still a very handy useful tool for creating very simple Physics shapes that will not add much if anything at all to the Mesh Objects Landimpact due to Prim Absorption. 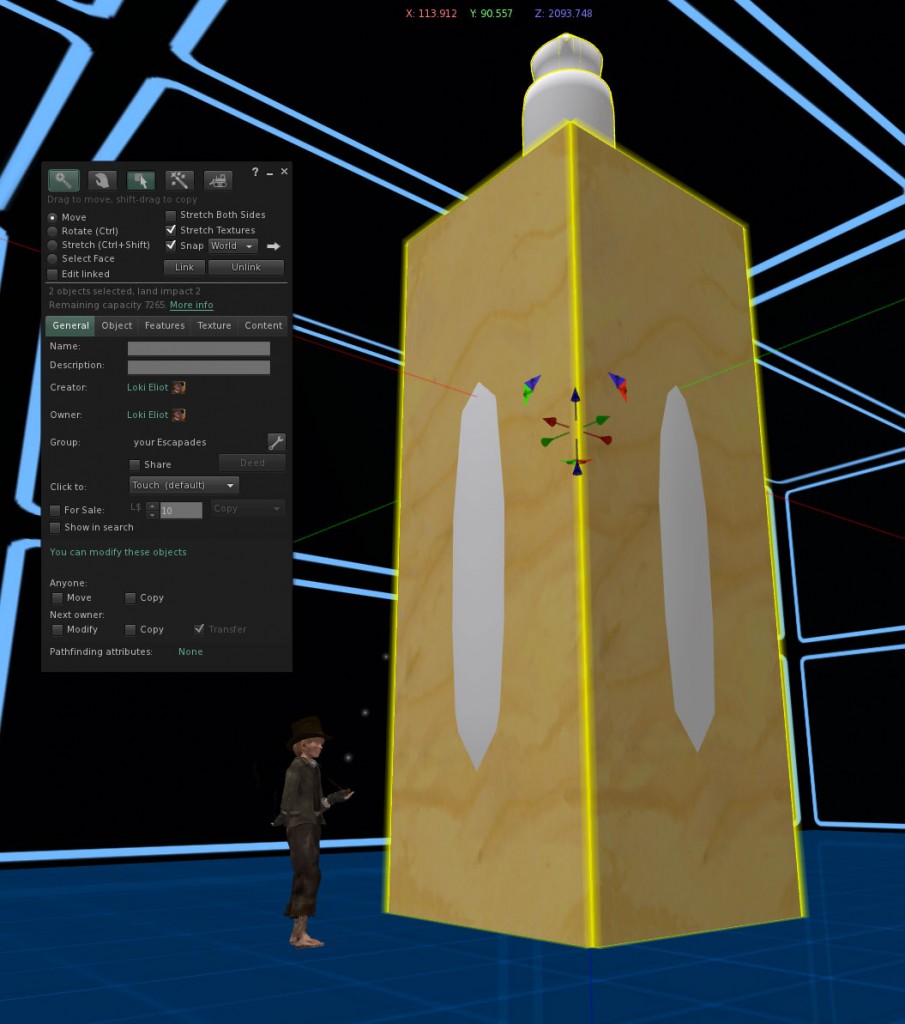 Im using one simple PRIM cube to create a block that will stop you walking through the bottle, thats all i need it to do really. I Link the Bottle to the Prim making the PRIM the root.

Notice that the landimpact is still only 1Li. Now all i do is set the surface of the PRIM to 100 Transparency. leaving me with a bottle i cant walk through.

So far ive concentrated on showing how to make  low landimpact HUGE objects but there is a flip side to this. I mentioned briefly during my explanation of LOD rings that some objects disappear quickly from view due to their small size. Whats happening is that because the mesh objects are small, so are their LOD rings and step out of their range quicker than if they were big. But this can be countered by doing the opposite to what i did to reduce the Bottles large land impact.

So my giant 1 Prim Bottle is shrunk right down in size by my feet (yes i know i need to wash). Look what happens when i move away from the bottle, it becomes a single white line. This is because i reduced the ‘Medium’, ‘Low’ and ‘lowest’ LOD settings during upload because i knew the object was going to be big. 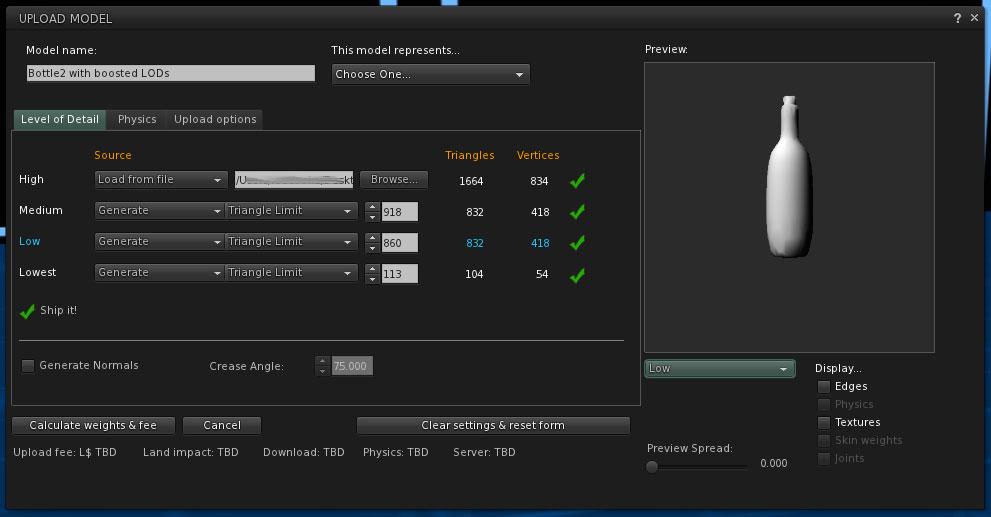 What i now need to do is import my Bottle again but this time with the idea of having it stay visible and more detailed for longer while small. So instead of reducing the LOD settings i have to increase them which will add to the land impact but hopefully be countered by the fact the bottle will be small.

NOTE: when it comes to mesh simply making it smaller does not necessarily mean the Land impact will reduce because you will find you have to boost the detail of the LOD so that its seen at a good distance. 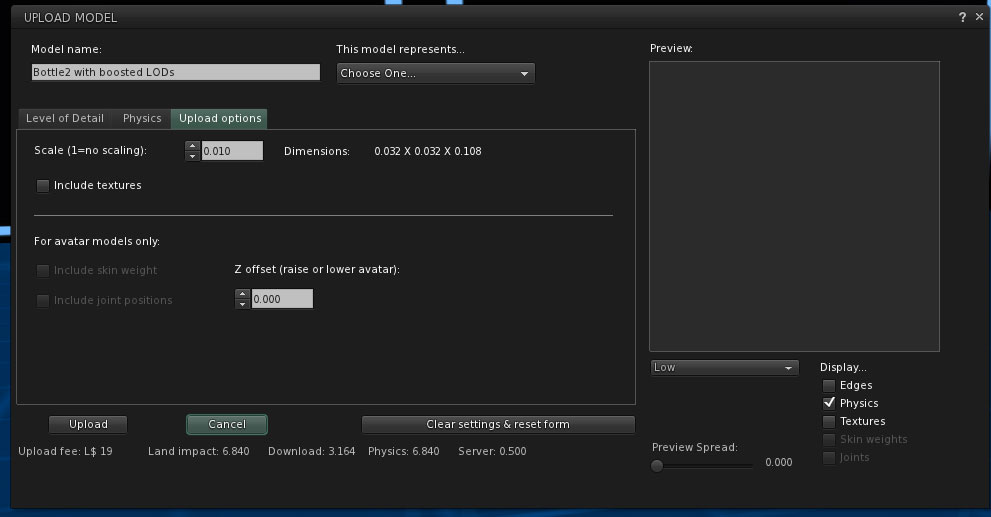 To get a better idea when calculating the costs, you can change the scale setting in the upload options. My calculated cost is 6.8 which is a bit more than 1li that the large bottle had. 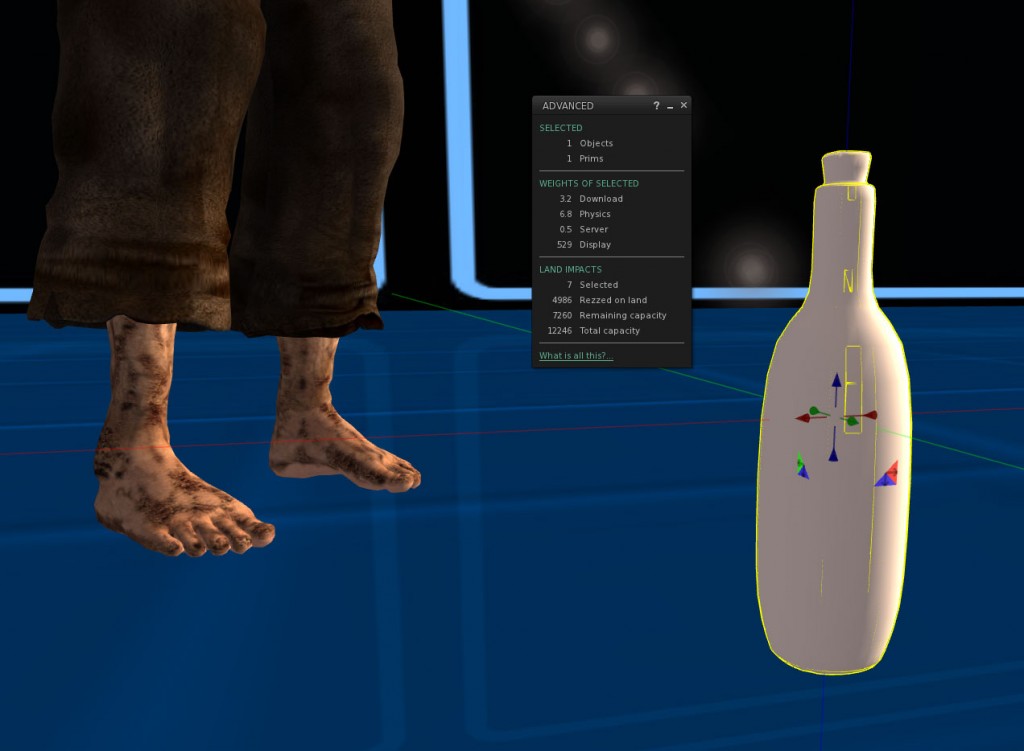 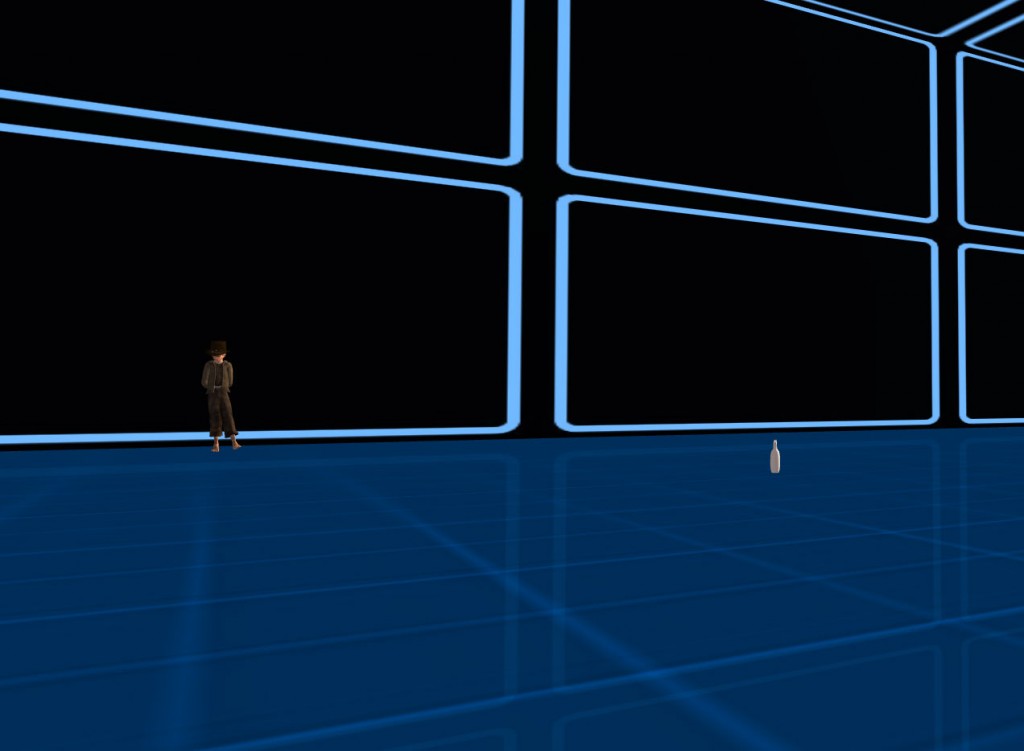 So the small bottle was rounded up to 7 Li but can be seen at a much greater distance. This i hope shows that you should consider where you mesh object is going to be. If this small bottle is going to be on shelf in a small room, then i should probably have not set the ‘lowest’ LOD settings so high reducing the Li. But for being viewed outside this small bottle needs to be this high in order to be seen so far away.

Well i hope this all didn’t just go over your heads. It’s actually really hard to explain it all but once you get the feel for how sizes, distance and detail effect The Mesh you’ll be making awesome efficient mesh objects in no time. Plus once you figure it out and master, you’ll soon appreciate how Linden lab have incorporated mesh. It forces you to be good, it forces you to learn to be efficient so that your creations can download and be moved about by the crappest of computers and slowest of internet connections.

ALSO, if you are interested in learning how to make a mesh object but have never touched a 3D programme before then my 6 part PDF tutorial ‘MAKING A MESH’ is still available inworld at Nemo Beach. LINK

25 thoughts on “The Secrets of Mesh Landimpact”