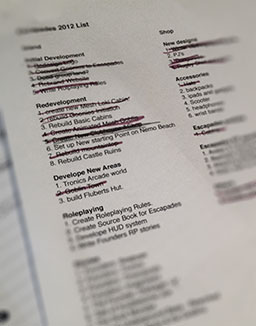 So much has happened in SL this year and i’ve been working harder than ever before.

Second Life is not a game for me, i work myself into stress levels rivalling those i had when working for a failing advert agency. But i love it, every moment of it. Im my own boss making what i want for a community that gets excited by every new thing i do and part of that is down to what Linden Lab has created. I thrive on this platform.

Last year i looked back seeing a stagnant Second Life and looked forward to 2012 with optimism. 2012 would be the first full year of what i see as the NEW SECOND LIFE under the leadership of Rodvik and the slim lined Lab. I wrote down a big list of goals that included learning to script better, learning to use blender better, replacing Sculpts with Mesh, creating stories and HUDs and mini games for when the Experience Tools Arrived. Well, most of that list was ticked off by half way through the year, the other half sits waiting for the ‘Experience Permission System’ to be released so i can make mini games and tell stories the way i want to in Second Life. Ive become obsessed with this new permission system (i’ll explain about it in another post). But this did not mean i stopped, i always found something else to do in the mean time because SL is like a huge 3D sketchbook for me.

So these are not predictions for next year, but rather a look at what i predicted or wished for this time last year.

1. Content creators will create the biggest and strongest change.

I said something about it being up to the content creators to grasp the new tools LL gave us and create amazing new experiences and stuff. Did this happen….. well, i’d like to say yes, but my gut feeling is that it was no. Perhaps the gap between simple PRIM content creation and the rather complicated MESH is too large for people to adopt and learn. What does not help is the divide that beginning to grow between those who know Mesh is an efficient way to create really great detailed content and those who believe it costs more land impact and lacks features they enjoy when using Sculpty Hacks. Sometimes it feels akin to Climate change denial.

2. Market place will become even easier and more efficient.

The new magic-boxless Marketplace allowing anyone to sell their creations on marketplace directly from their inventory. This will hopefully remove dramas…… yeh ok well, for me at least the new delivery system has made things a lot easier but there was a shed load of drama that came with it causing the Commerce team to be seen as… well lets just say i doubt any Linden will admit to being part of the Commerce Team. In the long term though, for those who continue to run a business in SL, Direct Delivery has made a HUGE difference in selling content.

3. More land will be used to host games and experiences to subsidise tier costs.

More and more people are realising this i think. I see many places popping up on Destination guide and they are small homesteads that are simply adding some nice things for visitors see and explore then adding items to buy or simply leaving a tip box. To be honest this prediction was made with the understanding that Experience tools would be released wight he ‘Experience Permissions System’ .

I said that LL would expand the SLfeed to include sharing other things across the grid such as Marketplace listings, destination guide listings. Truth is in 2012 Linden Lab pretty much did not touch the SLfeed. Did not even promote the feature. All my friends are on SL feed, probably because i bullied them to use it. It has been one of the most important features in my Second Life and I’m baffled to why its not been expanded to as a tool to bring SL users new and old together in conversation and sharing.

5. LL will create a mobile project that allows us to share creative aspects with the mobile world.

i said ‘What i hope is that what ever Rodvik and his team unveil in 2012 it will thrive on the freedom of creativity the current SL users spill out.’ Well i kinda got it right if i spin int :-p. LL released Patterns and creator verse and have some others planned. All of which have nothing to do with the SL platform but do thrive on freedom to create. A few alarmist suggest LL will now be distracted from improving Second Life to which i say poppy-crap!

it was a HOPE more than a prediction, and by the end of the year LL released CHUI test viewer which hinted at taking a look at the notifications system later down the road. The notification system bugs the hell out of me. Notifications in SL are important only because there is no alternative to getting information from groups. I could write a whole post just about groups and notifications and the crappy way we are kept informed. i think the summery of the problem is there is no synergy between the various features that produce and receive notification. Well anyways notifications still get dumped in the little crap box of doom.

7. Destination guide will have to evolve into something more universal and dynamic.

LL didn’t change anything about Destination Guide from what i could tell.

8. Old users will loose out to those who take hold of new features and brave the lag of progress.

Looking back at 2012 is fun. I built new games and new experiences, Built the SL9B Linden Lab, taught some of my friends how to make mesh, Reabuilt half my island and added some fun new characters, i scared peoples real life dogs with the Well and i rebuilt the Imperial Theatre into something that before this year would have been utterly impossible.