About a month ago i took a group of my Goony friends to a haunted hospital destination. That type of ‘haunted’ destination was becoming more and more common where you look around, see ghosts appear then fade away, with spooky set pieces and eerie sounds. While the rest of the gang was looking around and poking dead bodies with sticks, i was wondering wether i could actually make a haunted place that really did scare people.

So a month later i finish work on ‘T H E   W E L L’ an experiment to see wether i could scare people in Second Life. 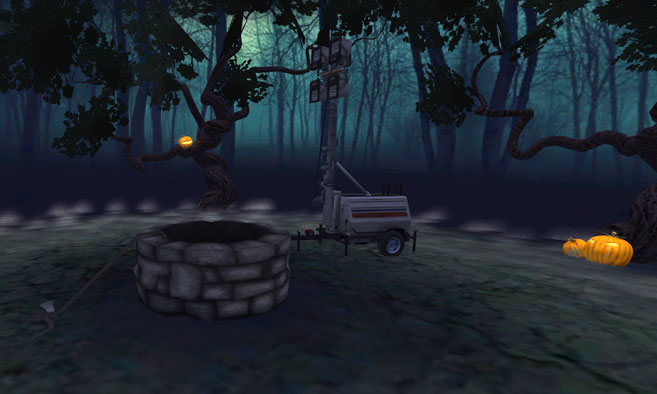 The idea is that a boy fell down a well, a rescue team was sent down rescue the boy but have not been heard of since. You then must go down and find out what has happened. You find a walkie talkie and communicate with a lone survivor of the rescue team who sort of guides you through the tunnels.

Expanding the use of the HUD

I love HUDs (Heads Up Displays) and while most people use them for functional controls, i love using them to tell stories or add to the immersive experience. For ‘T H E  W E L L’ i wanted to see how i could use them to scare people. I had been thinking for a while now about using a HUD to take over the screen. A traditional tool in Games are cut screens that cut away from the game and show a picture and some text to move the story along. So far i had not seen this attempted in SL before so would be interesting to see how people reacted to having their SL display blacked out.

The HUD is minimal, it’s simply a title at the bottom, hardly Head Up Anything. The main bulk of the HUD is invisible and appears when you step through things or on things. One of the issues of doing it this way is that you can’t click on anything because the HUD is in the way, but it would not take much to fix this in a future experience. As a result ‘T H E  W E L L’ is a game of exploring and avoidance rather than click and shoot.

Another function of the HUD is Cache Loading Efficiency(CLE). The HUD hides just below your view of vision all the textures to the main features you will discover, loading them into your cache before you come across them down the well. The HUD when attached also preloads and triggers very quietly all the sounds needed during the experience again loading them into your viewers cache before you head down the well.

Last year i created the ‘Escapades Evil Giant Zombie Worm Chainsaw Massacre’ which turned out to be very complicated for the new user to get into. Things like Reading instructions, buying things, then looking through inventory, then wearing it was just too complicated. So this time i decided to try using Linden Lab’s new Experience tools ‘llAttachtoAvatarTemp‘ and ‘llTeleportAgent‘ to see wether it could cut out some of the crap.

Another part of this experiment was ‘Payments’. I always get a few comments that people won’t like to pay to play. I charged people to enter the Underground base game, and i charged people to play chainsaw massacre and charge to play New Babbage Chronicles. All these have shown people are willing to pay to play and if they get something in return that they think was worth the credits then tis all good. But integrating a payment system with the new experience tool set was something i had not done before but the result seemed to work really well.

Starting the experience is as simple as i could currently make it. You arrive, see the sign which has a simple message ‘Pay L$25’ to enter the well. You click the sign to pay, then get an ‘Accept Attachment’ dialogue box. Accepting will auto attach the temporary HUD which automatically starts by bringing up the instructions which are simply ‘Walk over to the well and accept the teleport request’. Walking over to the well you will get the TP request and on accepting will be teleported down the well and then you are immersed in the experience. 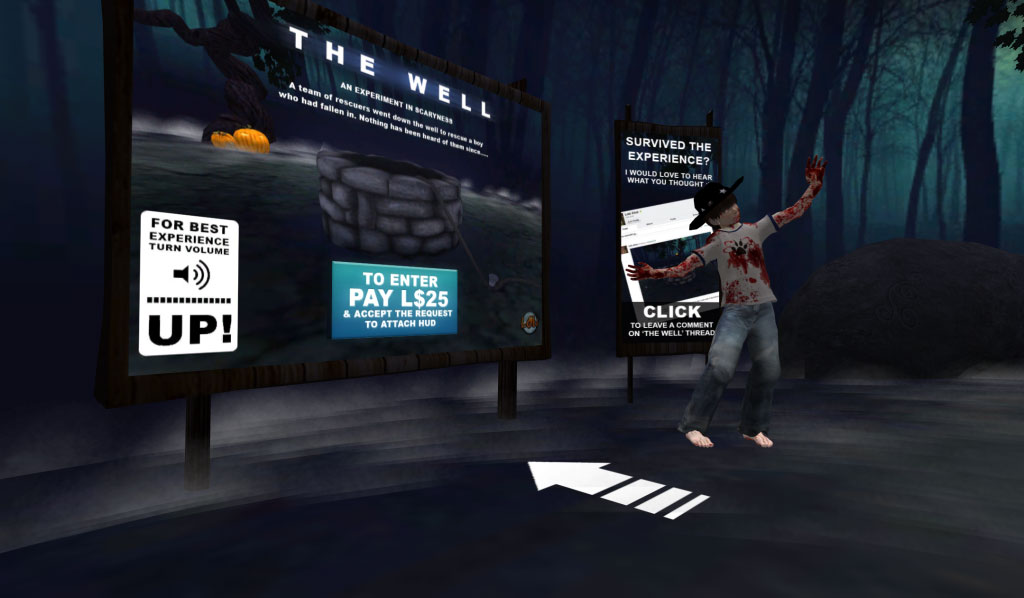 The start could be even more simple once Linden Lab release the new Permissions system which i assume allows region owners to request permissions Region wide for things such as Teleport, animate, attach etc. This would simplify ‘T H E  W E L L’ experience by not needing to accept an attachment, or teleport request. You would pay and get the hud instantly, you would walk to the well and teleport instantly. This would also eradicate the chances of missing the teleport or attach requests which pop up and disappear rather quickly.

I’ve been messing around with the new Pathfinding tools for some time now but this is the first time i’ve used it in a proper experience. With the Cheese Fairy i wanted to use pathfinding, but i could not get multiple states to work. I wanted to use pathfinding for the Goblins on Escapades, but i could not get them to attack and touch the avatars. For ‘T H E  W E L L’ i made some pathfinding creatures and kept them simple using one state and also figured out how to make them attack and touch you with frightening consequences :).

A bug of some kind causes pathfinding alpha flipping animated mesh to sometimes become invisible. For my experience i decided this just added to the scaryness.

Reaction – is it scary?

I was gutted i could not complete the experience before Halloween. In the end i submitted to Destination guide in the morning of 31st October and within half an hour it was up on destination guide which kinda freaked me out.  So far there has been a good steady stream of visitors which has not caused the sort of LAG i had last year. Nor has the SIM froze like it did at New Babbage. Part of this is because i might be better at scripting :-p.

The Price to take part is just L$25 because overall the experience is quite short (about 3-6 minutes depending on fast you run). There are four different routes to take to the end and initially failed to point that out to people. So if you go through once then go down the well again, it might be different depending which way you turn. People also got confused because i used GAME OVER at the end of the experience, instead of THE END. GAME OVER implies that you failed to complete the experience so I’ve been and changed it to THE END to satisfy those who cant stand open endings.

But are people finding it scary? Well some are finding it a little disturbing, but a lot are saying it made them jump out of their skins. It might be down to the sort of person you are and wether you jump easily. It can also depend on your computers volume setting. Part of the reason the experience is so short, might be to do with the fact people RUN to the end because they don’t want to hang about lol.

Anyway once again i’ve learnt a tonne of new things while scripting and 3Dmodelling for this and no doubt i’ll learn lots from observing the victims of this experience. It will be available right up until Christmas so check it out and id love to hear feed back on my SL feed.

I’d Like to Thank all my lil beta testers and Matthew Querrian who helped me get my head around some of the complex scripting issues. X