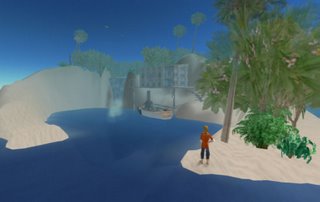 I’ve rented an Island in SL from the Anshe Chung empire.OS far its been very kool. My island is small but comfortable and i have parties witht he other Goonies on it. It has a waterfall, a secret cave, bees, a tree house, and a cove to sail my boat in. I bought a boaght from Mannie a real kool ship builder. Its called H.M.S Gunner, named after my grandfather. The whole island has a kool 1920’s beach paridise feel to it.