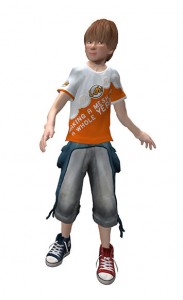 This week marks a whole year since i started selling Mesh Clothing in Second Life.

To Celebrate i have released for one week only Two FREE Limited Edition Anniversary V2 Shirt designs available on marketplace or at my two inworld stores.

My first shirt was the Ninja Boy Shirt, along with regular Jeans and although they were well received it was not until i released the Hoodies and Long Shorts that people really started to take notice. Originally designed for the Kid Avatar market as a means to finally get a good kid shape via specially designed and fitted Mesh, it was not long before adult sized avatars and Furries were also trying out my clothes.

But it has not been Second Life changing for everyone. Right up until christmas last year Phoenix lacked mesh leaving many to see nothing but blobs for  three months. Also Mesh clothing has restrictions about sizing leading to some people not being able to wear mesh because they don’t fit the default size dictated by us designers.

During the year i learned a lot more about mesh, not just with clothing but buildings, environmental objects such as trees and grass, Complete Avatars and accesories. This truly has been a revolutionary year for content creation.

So whats in line for the next year? Well Specular & Normals Mapping will arrive allowing better detailed texturing of mesh. This should allow us to make better impressions of fabrics for clothing if your computer can handle it. As for my clothing, each step i take the more detailed and complex the clothing will become. There is still plenty of ideas yet to be realised, and with your support and encouragement i can’t see myself stopping any time soon. Expect new Hoodies this fall.

So here’s to another year of Loki Mesh Clothes!