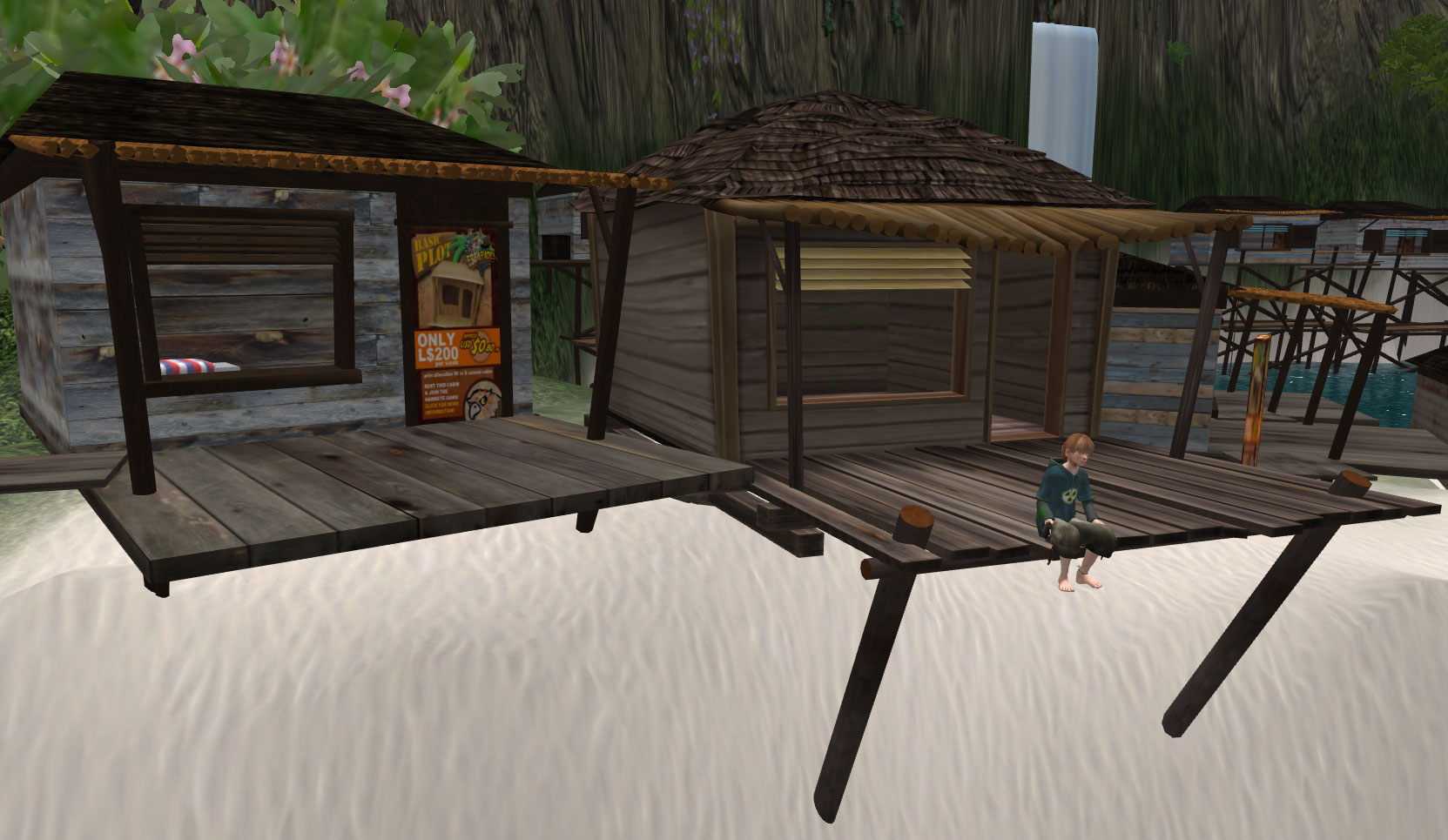 Nothing new to ad to my Mesh building skills other than realising that you can use previous models to help build new ones.

Part of my Meshing up Escapades island is rebuilding the Basic Beach Cabins. There are three types of Cabins available on the island to rent, Beach Cabins, Stilt Cabins and Barrel Cabins.

I decided the Beach Cabins would be the easiest to upgrade because i figured i could reuse elements from my Rock Cabin and the NewClubhouse i recently built. So really there was nothing new to learn meaning it was stress free and fun.

Comparing the Old with the New

The best part was comparing the Cabins weights with the old Prim version. You can check the Objects weight costs by clicking ‘More Info’ in the build edit window. 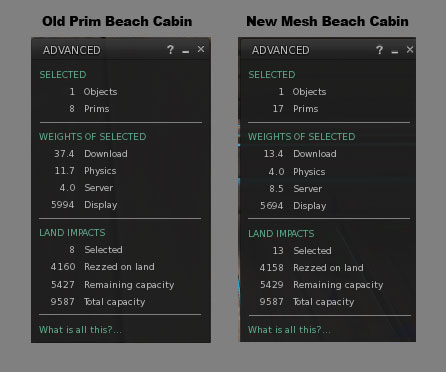 The old prim Beach Cabin was built with a REALLY low prim count of 8 because i used to live on a Homestead and prim allowance was tiny. The new mesh Beach cabin comes in at 13 Land Impact count but is far more detailed with gaps between planks, rickety roof top and supports. Creating something of similar detail in prims would come in above 13 prims.

This apparently represents how quick the object is to download. The old Prim cabin had a download count of 37, the new cabin just 13.4 and you do notice it pop up much quicker than the old Cabins when you log in. – Spiffing!

The more complex the Physical shape of the object the higher the count, except i thought i had made the Physics shape in the new cabin a lot more complicated. The count shows old Cabin at Physics 11.7 while the new Cabin comes in at just 4. The old cabin was built using sculpt tool to create more detail with just one sculpt prim, then id set the sculpt to Phantom so the only the walls and the floor was physical. The New Mesh Cabin has more complex roof and even the supports are physical, yet it comes in less than half the physics count of the old Prim Cabin. KO!

This is supposed to be a measurement of the impact the object has on Second Life server resources. It is here where my New Mesh Cabin is actually a higher cost at 8.5 compared to the old Cabins 4.0. Which is slightly concerning since the Server count is probably most important in fighting lag? … isn’t it?  …..we’ll have to weight and see.

In the end the display count of the new Cabin came in at 5694 which is marginally less than the old prim Cabin that was 5994 and is only just below my much bigger more detailed Rock Cabin of 5879.

To be fair the Old Prim Cabin was really really basic to start with so getting performance gains from changing to Mesh was going to be hard to see. Where the new Mesh Cabin improves things are detail and appearance while also downloading and appearing quicker in the viewer. Hopefully the raise in server weight costs are not so great to effect things.