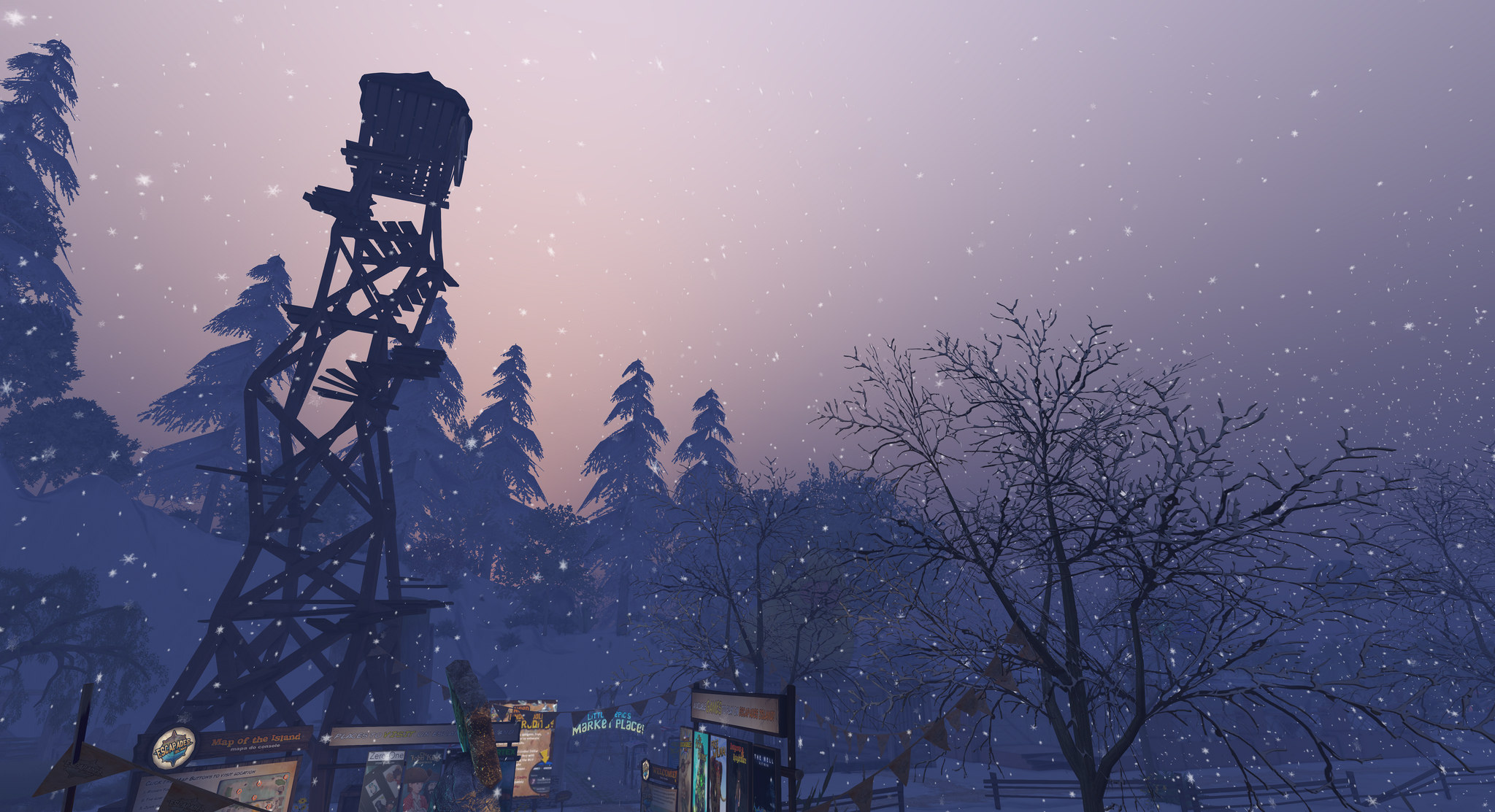 Last year i left 2016 rather optimistic for 2017 and wrote a list of things i’d hope to do this year. I said i would take a step back and get more involved in things. As it turned out many of those things did not happen, but thats not because i decided not to, but because 2017 was a year of constant unexpected delays.

And to finish the year i have had a cold, headaches, blocked nose and a sore throat all through the holidays delaying even the little final things i wanted to do. So i’m now hoping that as the new year approaches this dam cold will finally die along with 2017.

1. Start to truly experiment with VR.

At the forefront on the theme of delays during 2017 was VR. Last January the only VR headset i had was the PSVR and boy was i having fun with such amazing experiences as Resident Evil and Farpoint. But I’m far from mainstream when it comes to VR, i’m a Second Life user, i dream of getting down and dirty with creativity in VR. There were many factors in 2017 that didn’t allow me to just jump into VR, for one i am a Mac user, another was price of hardware. Slowly and surely Apple added VR support to new Macs and VR Headsets finally cut costs so that by the end of 2017 i finally have the set up and am looking at 2018 as the year i get to, as Star Lord would say ‘Build some crazy shit’. 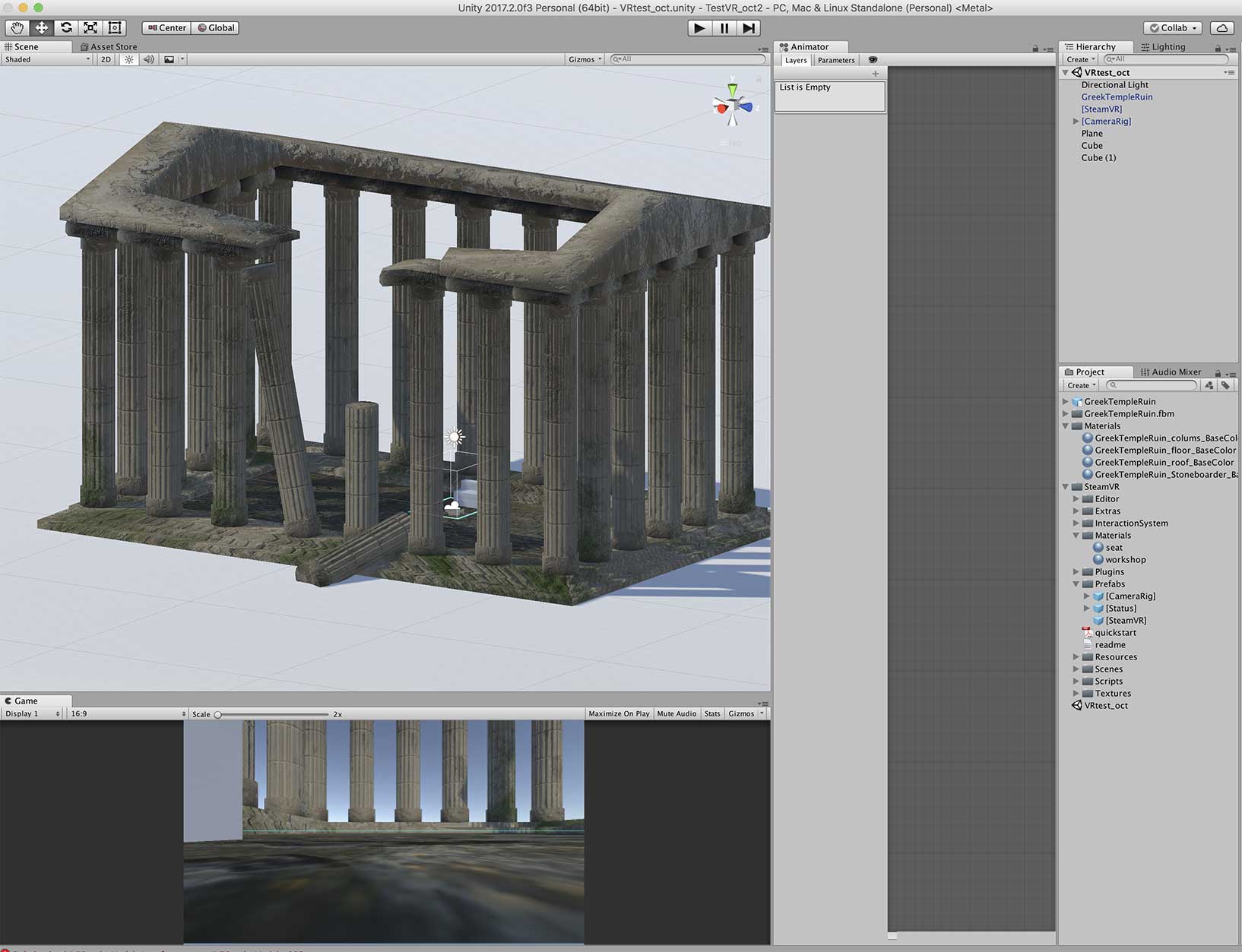 I plan to start by creating a sort of VR workshop in Unity3D that is mapped to may actual real studio but not looking exactly like my room, a workshop full of stuff that i love, a place where i can tinker on VR gadgets and characters. From there i might be able to export my experiments to High Fidelity or Sansar.

2017 was the year the new VR Virtual World of Sansar finally opened up and i did explore and try to use it, but with no mac support i’ve turned my attention now to Unity to experiment in VR. Second Life is still the best Virtual World out there where all my friends still are and i’m able to do far more interesting stuff than i currently can in Sansar. For instance i cant even make my own avatar in Sansar yet.

In 2015 linden Lab announced their new Bento Avatar system. Two years later and i still haven’t released my first bento Avatar. This is all because of the Blender Plugin ‘Avastar’ which took over a year to develop but while i moan about how long it took and how many sleepless nights it caused me in 2017 i have to explain that this plug in is amazing, and as complex as it is, it actually makes the creation of Bento avatars much easier. It lead me to realise just how un-friendly Second Life has become to some creatives. 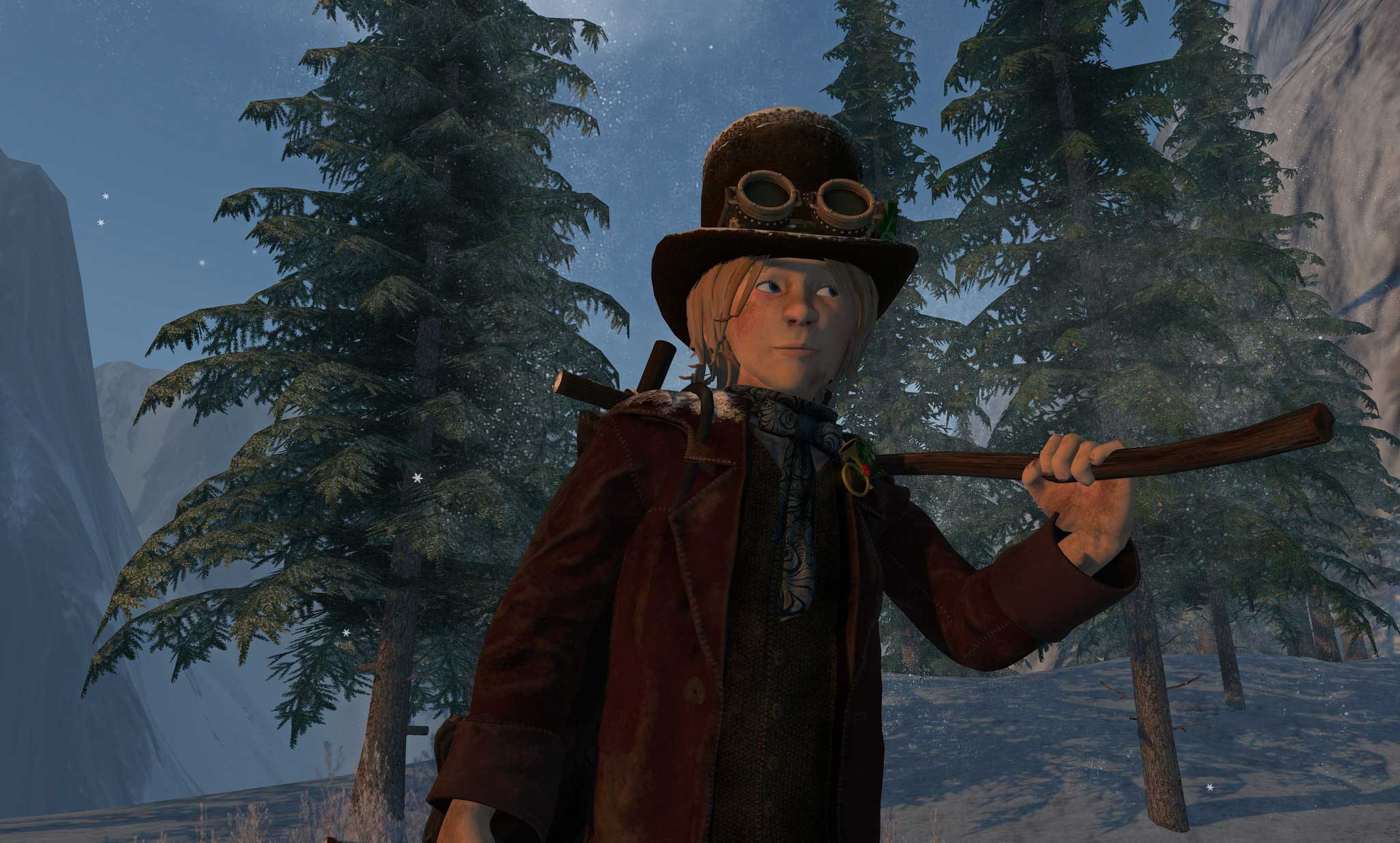 So early in 2018 i hope to finally release my Bento Kid avatar. There are still a few beta testing and adjustments needed on the Basic Free Ruthus version, plus i need to create some custom ethnicities and skin textures for the planned Pro versions.  Then of course i hope to spend 2018 getting back to making clothes using my new toy Substance Painter.

3. Be a part of Fantasy Faire again.

Last year i just helped with the Roleplaying side of things at Fantasy Faire which was great fun until my nephew gave me a horrible cold to battle through. This year i would like to be a region builder for Fantasy Faire again. I learnt a lot about how the faire works in 2015 and would love to contribute something very different to the faire possibly utilising the new Animesh feature if Linden Lab somehow get that finished before April (yeh right).  I’ve yet to ask if they need any more region builders.

This was on my list last year and really will probably be on the list every year. Strip me of all my tools and what you’ll have is a story teller. At the start of 2017 i was fully committed to creating a New Babbage Chronicles Story Game. I was creating multiple illustrations and writing pages and pages of plot only to suddenly stop as preparations for Fantasy Faire and the need to try and stop my clothing business from collapsing by working on a Bento Avatar took precedence. Then as Avastar development went beyond its predicted release date and other events came along the Babbage Chronicles started to collect dust.

That’s not to say i didn’t create any story experiences this year. Fantasy Faires tale of stone frogs and malicious bards was a joy to help bring to life and The final chapter of  T H E  W E L L  seemed to entertain and freak out those who played it. There was also the Escapades Anniversary revealing of the Founders Tale.  I’m still not sure when i will return to working on Babbage Chronicles but the hope is that once the Loki Bento Avatar is released i can get back to doing other things, Babbage Chronicles possibly being one of them.

Half way through 2017 i had this really odd feeling. I’d been to see the long awaited Sansar and i had explored the immersive realms of VR, and Linden Lab made tier cuts plus added more prims to Second Life Regions.  I had logged into Second Life and was standing at the memorial stone for my old friend Sven Homewood looking out over Escapades Island. i was considering all that i had learnt in in creating things in Second Life, what works, what does not work so well, and what i had hoped to do on the island and what i now know is not possible on the platform. I began to think about Escapades Island relevance. 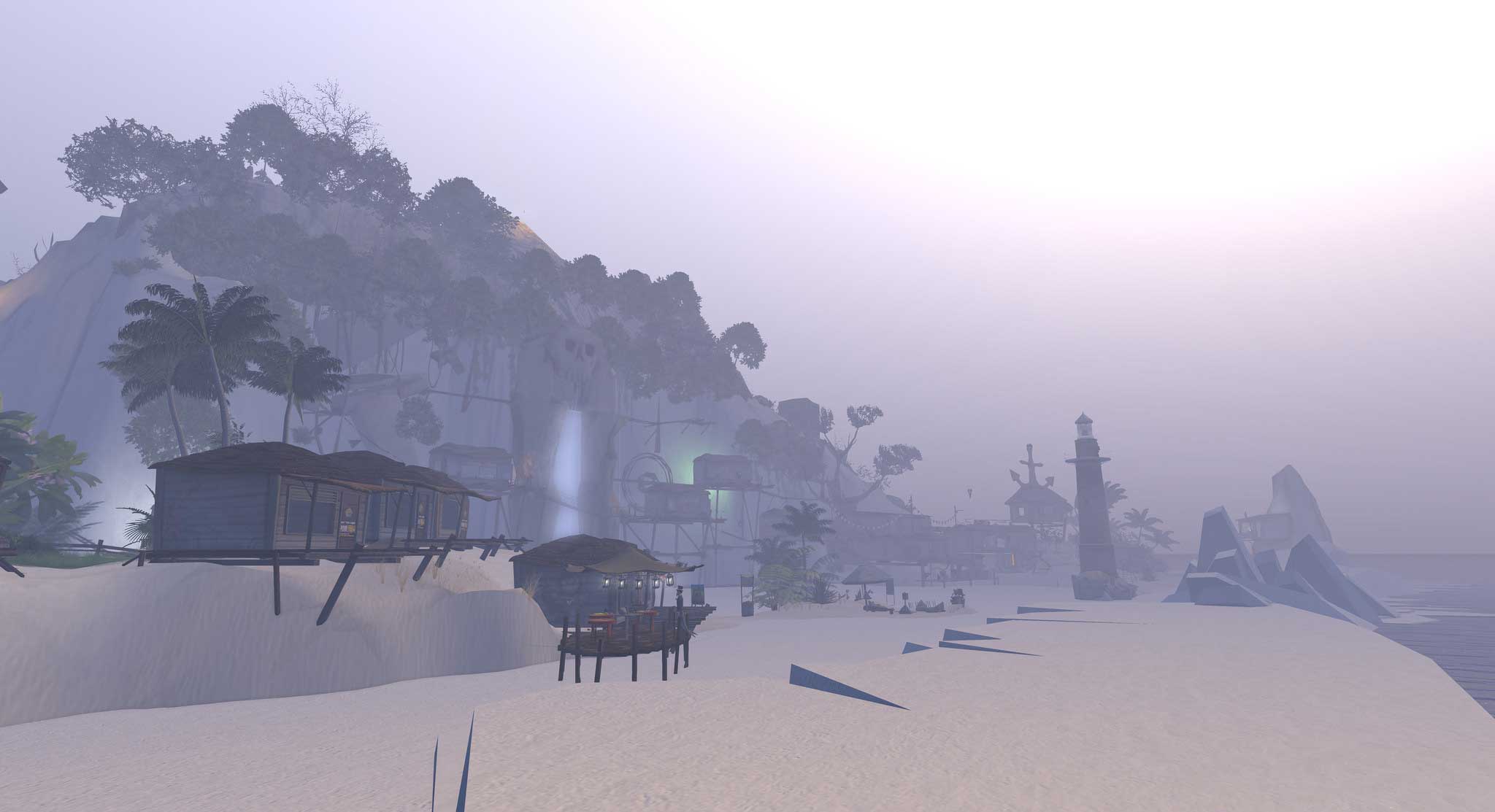 Now that i know what second life can do, perhaps i should rethink what the island is for those who live here, and perhaps try to simplify its themes encoring the residents to contribute to it’s mysteries and bring a synergy to the whole island.

I plan to create a presentation of plans and concepts for this rethinking of Escapades Island early in the year in order to get the residents on board since without them the island would certainly not exist.

In 2017 i randomly backed a Kickstarter for a 3D Printer that actually turned out to be mega awesome indeed. The Dagoma Neva printer will hopefully path the way to 3D printing models that i then plan to paint old school style. 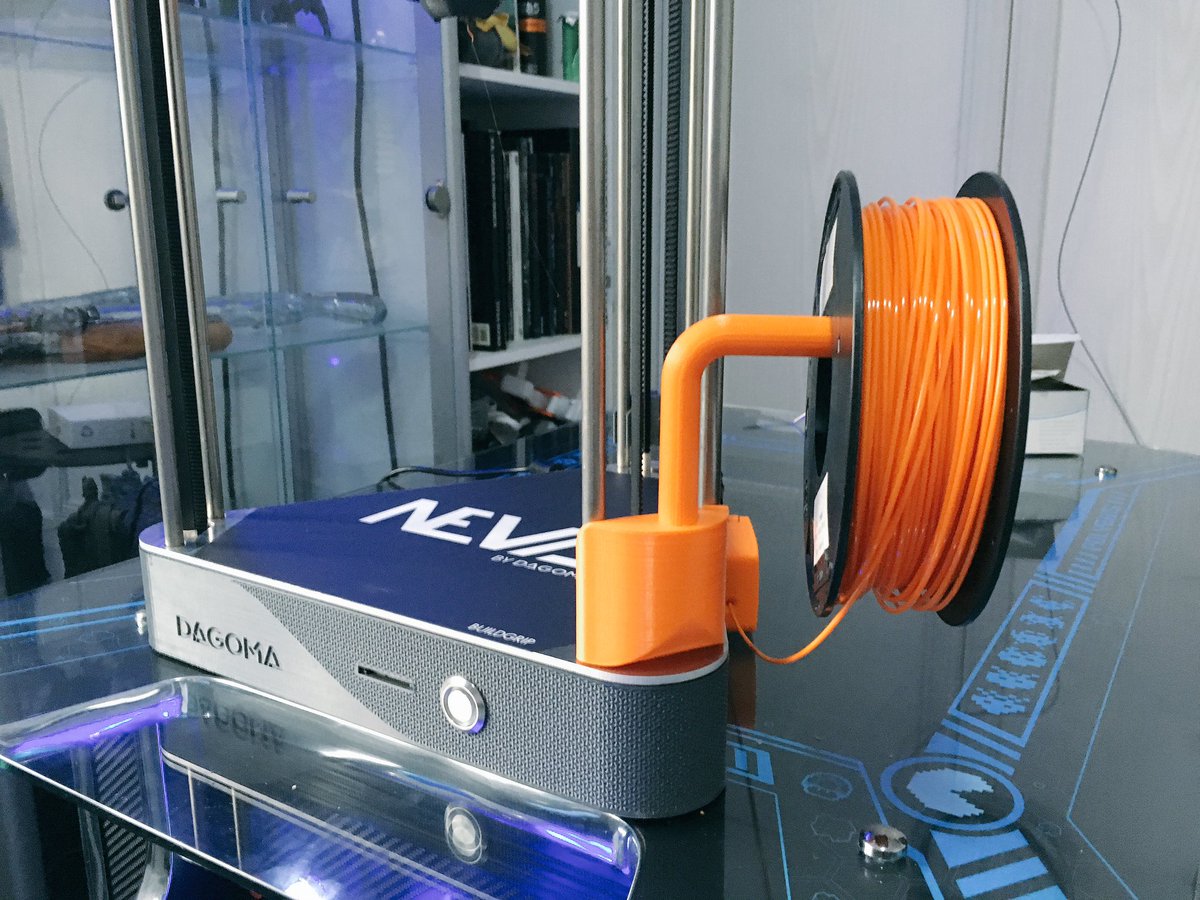 I’ve experimented printing temples, Fidget Spinners and star wars snow flake decorations but next year i want to do some proper action figure prints. Thats why for Christmas i got lots of paints and grey colour filament. I love this whole idea of creating something thats ends up being both digital and physical. Printing out my Loki Bento avatar as an action figure would be just amazing to do.

Things i did not accomplish in 2017

I wasn’t on the Drax files, but im pretty irrelevant to his show now he’s moved to Sansar :-p (i’m kidding!)

I hoped to get into 3D Scanning during 2017, but while the Bevil3D Scanner turned out to be a complete waist of time i did experiment with Photogrammetry, the process of using many photos to calculate 3D volume. The results of which i used to create parts of T H E  W E L L  experience and who knows, might get used for the rethink of Escapades Island.

I also did not get my PrioVR Mocap suit which was a kickstarter thats 3 years lates. I keep getting promises that i’m next for shipment, but if it’s to arrive it wont be until 2018 now.

2017 felt like a right sludgy year where one step after another seemed to take forever. My hope is that 2018 will be the year where the giant rusty cogs of progress start to move again and i get to do some really exciting things in Second Life as well as other platforms. Hope everyone has a great new year 🙂