Skip to content
So i finally got round to visiting the Linden Realms game and wow.
Straight away I’m hit with ‘HOW DID THEY DO THAT!???”
Over the last year i have battled with the limitations of second life when making basic gaming experiences that are familiar to those from proper games. Other than the basic cause and effect scripting and the 100% health level of a damage enabled sim, there isn’t anything else.
Here is a break down of what Linden Realms does and how the tools could improve games I’ve already built.
Instant Teleport
In Linden Realms:
The Goonys walked to the Linden Realms Portal which automatically teleported you to the game region. This is the first ‘WTF?’ moment .
What i have thats similar:
The closest i got to an auto teleport is for people to voluntarily click a board that teleports to the game location. Such as in the secret Underground base i have a hole you have to click to go down into.
Effect on my Games:
You would be able to just walk on the hole and automatically be teleported down the hole.
Auto Attachments
In Linden Realms:
Next we all automatically had a crystals HUD attached out of no where. I searched high and low for a scripting mechanism that might auto ad a HUD. This was because i wanted news on basic viewer to be able to wear my Bashables HUD so they could operate the bashing sticks.
What i have thats similar:
The Bashables system on Escapades allows you to activate a stick to bash things on the island with one click. Unfortunately once you have been given the HUD and stick you have to find it in your inventory to then wear it.
Effect on my Games:
The New tools could allow for the Bashable HUD’s to auto attach making it easier for new people to quickly have fun on Escapades 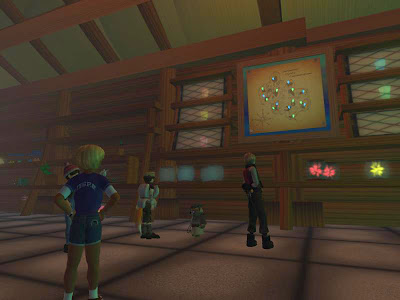 Deadly Scenery
In Linden Realms:
Then the Goonies went searching for Crystals upon which i Stumbled into a green swamp and promptly drowned and teleported to a respawn point rather than my designated home point.
What i have thats similar:
I tried once in a goony adventure to have a room fill with custard. Those goonies unfortunate enough to get out the room before the door closed ended up growing in custard. With the help of my friend we created a script that would request to teleport them to a location on the island when the custard prim rose high enough to touch them. The drawback of course was it only teleported one at a time and had to wait for each to accept the teleport.
Effect on my Games:
I can drown Goonies on mass! 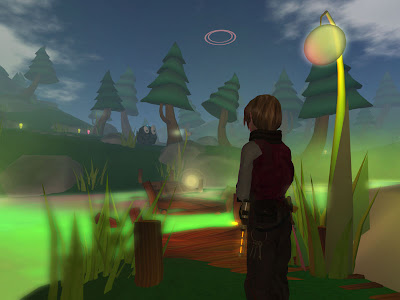 NPCs
In Linden Realms:
We suddenly became aware of big rock monsters chasing us, and it was really fun as they moved and followed at just the right speed that you could only JUST get away 🙂 If they touched you then you died and teleported to respawn point.
What i have thats similar:
Evil Zombie Worms. They use a basic base script package that i can drop into any monsters making them follow people. These follow in jerky movements as the detect script hurts every second or so to locate nearest resident. Also they do no damage because you need land to be set to damage enabled in order for objects to kill you and send you to your home point.
Effect on my Games:
I could make goblins, worms, and other nasty things a threat to my visitors, not just a nuisance.
Im only speculating how the new tools might be able to enhance my own games. As yet LL have not told us exactly what these new gaming feature tools are so some of what i said might not work, it all depends how much is scripting and how much is region level permissions.
Regarding Linden Realms itself, my friend Jesper pointed out that it was not very social game. The Hud gave us tasks to do and places to go, and after dying and re-spawning the group quickly got split up. For anybody thinking of making games in SL my friends and i personally think that group activity is a very important piece of what makes Second Life special and should be considered in the games created from here on.