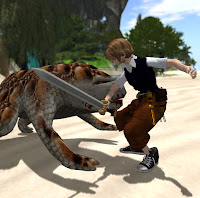 At the very start of August i tried something i had been wanting to do for a while.
I’ve often seen Second Life is a Games Development Kit and have been waiting for the opportunity to build gaming experiences. To do this i need to have enough skills to build the content, textures, and have a basic knowledge to script simple actions. I need a place to be able to put the game, i need an audience to play it and ways to communicate to them that the game exists.
Well i upgraded my Island last year to a full sim with the help of my friends and through the struggles to meet Tier costs i managed to learn basic scripting and created the Underground Base adventure as an experiment to see how well it would perform.
Here are findings i found most interesting.
Puzzle solving.
I went for a simple collect and drop adventure based on video games from early 80’s like The Code masters Dizzy Games. You would find objects and place them on the ground to interact with puzzles. All through this adventure i found how people wanted to do things interesting. Such as instead of dropping objects on the floor, they preferred to wear them. Perhaps in future i should accommodate what seems to be an intuitive action.
Weapons
For this adventure i updated my BASHABLES weapons. Before the free bashing stick needed a complicated combination of button pressing to complete the simple task of swinging the Stick. Now you wear a heads up display (HUD) that has a single bash button to BASH things. It makes for a much more simple and fun experience while also allowing extra features such as RADAR for monsters and objects you can BASH, and also a link to my store to buy extra weapons boosting sales.
Accommodate trial and error.
One thing i had not thought about prior to the Adventure being open was how users tried out possible solutions. If you leave collectable objects in a room, Users will leave them laying around. I should incorporate a self destruct in all objects or switch on Auto return. I would find countless amounts of spanners against a door when they really needed to find a Key. 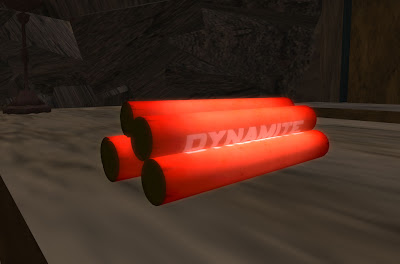 Speech.
I used Speech later in the game, but due to SL’s limit on audio length i have to chop it into small 10 second parts, and they tend not to load in the right order no matter how well i script it to play. The reason for the 10 second limit is to due with copyright infringement yet places like iTunes play over a minute of free preview and we can play a whole song via shared media so whats the problem?. I really would like to upload longer sound files for story narrative and atmosphere.
Scripting
There are lots of tools that do most of the fork for me since I’m number dumb. Prim Puppeteers is an amazing piece of kit for animating prims, and its grown to include some very nifty features with intuitive simple controls. The Smooth feature is amazing. You can use it to create an animation that is activated by various means. I mostly use chat activation where when a specific prim is placed on the ground it shouts a keyword that activates the animated object. There are tools for Old SL users that can listen to hidden Channels which is something to think about in future. Really i should not care, if they choose to cheat then it’s their loss.
I also found great help from the SL community via the SL Forums. I would say what i wanted to do and a few minutes later someone had shown me the script i needed. It was a very positive learning experience and showed the power of the SL Forums. 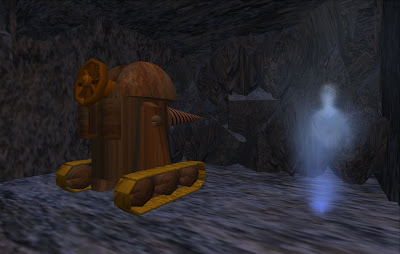 Promotion.
The most powerful tool for promotion in SL is currently the Destination Guide. Im hoping in future the SL Profiles will gain an ability to share destinations/locations/messages/snapshots between your friends. At the moment i can send attachments to group notices, or to individual friends on my list. There is no way to send a message out and have that message shared from friend to friend. When that happens promoting should be a lot easier.
In the mean time the destination guide seems the best way to have your event or place promoted. As soon as the adventure was placed on the destination guide people started to arrive at Escapades island looking for it. Unfortunately for some unknown reason the LL editor had decided NOT to use the picture i supplied and used one showing a camp fire instead of the Underground Tunnel. This ultimately confused the hell out of people who arrived at the cave entrance looking for a camp fire. After messaging the LL Editor the image was replaced with the one i supplied and i witnessed a surge of users arriving and entering the game. This proves how vital it is to get the destination guide image right. 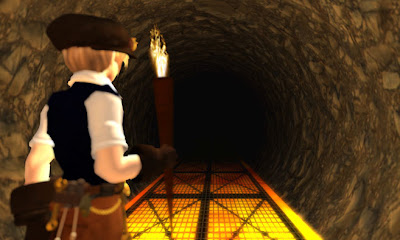 Unfortunately it’s possible that most people who use destination guide only check out the Featured destinations as once my adventure dropped off the featured pages visitor numbers dropped dramatically. It also might be to due with the category i picked GAMES which is not available on the Login screen destination guide or basic viewer, so choose your category listing wisely. Saying that, my other Destination ‘Rickety Town’ still enjoys a healthy average of around 35 visitors a day and its been in the Fantasy Category of the Destination guide since May.
The Destination guide needs to evolve a bit more. It started out as a simple list of good places on SL and has quickly become one of the most important aspects of SL . Note that in the login screen the destination guide shows a number of people already at the destination, it should show this across all the iterations of the Guide and we should be able to love destinations as part of our social profiles.
Rod Humble at SLCC shared his hopes to bring a more integrated shared social experience to SL by end of the year so I’m cautiously optimistic that soon my promoting woes will be a thing of the past. 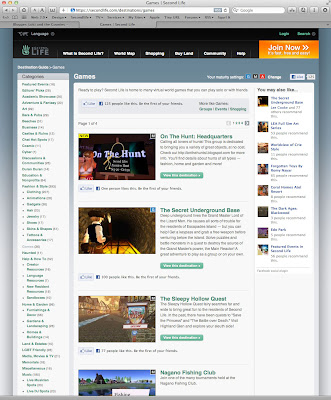 Revenue.
Last but not least we come to the issue of money. Some people have frankly told me all experience on SL should be free. How can people say that to me when LL loom over with hands out wanting $295 each month. I can’t make this money back from my real life job, i can’t make the money back from rentals alone. In fact Shops never seem to stay more than a month even though the Island is having 1000 visitors a month and increasing. So if people are visiting Escapades island not to shop why are they there? I believe the answer to be to experience something. Currently half of the Escapades Tier is paid for by donations. I decided to try and see if people were willing to pay a $L100 ticket to enter the game which they could use again and again if they wish. Within 3 days of the Adventure opening the island tier was paid for without need for donations.
This test adventure has shown people are definitely willing to pay for experiences in SL. My enemy at the moment is the destination guide drop off. Building an adventure experience is only as popular as its time on the destination guide, so either LL will fix that issue on the guide or ill have to figure out some way to give its presence longevity. It might simply be that Escapades island will gain more popularity as i ad more adventures and its reputation spreads. I will no doubt have to go back to this test adventure and update it, or refresh it. I will also need to retying the Keypass system as it was not perfect. People could if they tried hard enough to get around the need for a keypass.
Overall
Making this adventure was fun.  I took my Goonies on the first adventure and they all really enjoyed it. Then seeing total strangers having a go was great fun too. I enjoy watching how people work things out. It was also a great turn point in what i know is possible in SL. I am one man in a bedroom trying to create experiences that are traditionally done by a group of developers. In SL we can make a gaming experience, we are being given the tools to turn SL into a gaming platform. It’s what i have dreamed of doing, this is proper indie stuff. And to top it off people are willing to pay to play, what more incentive do i need!??? 🙂