It would appear i forgot to blog about the particular event.

After the madness of the Sky platform drama the Goonies quickly discovered that the Grand Master had written up Dastardly Plans to irritate the Goonies and stop their fun. Deep down in the Secret Underground base are drawings of what the Grand Master plans to do. On that list was the sabotaging of the Flying Ferret Sky Platform.

Another plan on the Grand Master List involved custard and sure enough the Goonies woke one morning to find the whole island covered in custard. With the island covered in custard there would be no way for snow to settle over winter meaning NO SNOW!!!!! meaning NO SLEDGING!!! and NO SNOWMEN!!! and definitely NO SNOWBALL FIGHTS!!! … something had to be done and quickly!

As you can see from the video many Goonies drowned in their attempt to destroy the Custard Pump. Luckily Goonies never say die so we all re-rezzed at rickety town and partied WOOT! 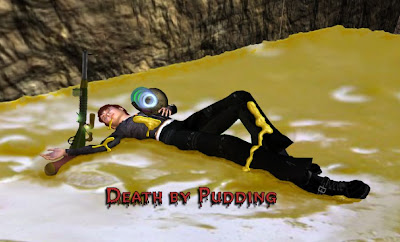