My last post talked about my frustrations of a stagnant virtual world, well imagine my delight when i got home to find viewer 2.0 Beta finally out to test drive. my initial thought was ‘ok is it just a facelift?’ 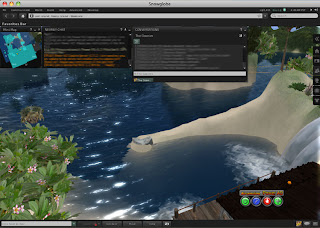 I’ve been playing around with it a few days now and i really like it. Of course there is a few really annoying aspects which i’ll list but my overall attitude towards it is positive. What SL needs is a kick up the arse and maybe this is it.

The Goods.
1. Sleek design. The over all new UI design is wonderful with its shades of… black…which allow whats being displayed int he virtual world to shine out as the main focus.
2. The Slide Bar. It’s fiddly for a long time resident to get to grips with but its got potential.
3. Shared Media. This new feature is a real mind blowing addition to creative tools. With the ability to now use web apps right in the viewer as part of your creations, this could change the face of SL completely. In testing i set up a shout box on my island, had an animated gif of Sonic run across a prim. It will take perhaps a year before we really see how this will be best used.
4. Online Group Members. Now i can see who in a group is online. No longer do i have to say “Anyone online?”
5. Browser Bar. Akin to a web browser viewer 2.0 has a browser bar at the top, ive only just started using it to TP back to previous locations. It also has a Fave bar under it to add your most visited locations.
6. New appearance layer. We now have a layer for adding tattoos to skins, and also an alpha layer to hide parts of the body. Myrtil already showed me her new Muddy Face tattoo.

Ok thats just a few things i liked about the new Viewer. But it’s not perfect and i feel there are a few things they could do before releasing the final version.

The Bad.
1. The new Chat layout. I was at the Vortex club trying to read everyones fast paced chat. The new viewers default chat layout shows an Icon next to the avatar name on one line then what they say on another line. This quickly fills up the chat box so that you miss alot of what the crowd has said. Lukily they did give an option to revert to old text layout so it’s not really a problem.
2. Mini Map. Where do i put the mini map? It does not shrink small enough to put in the top left corner which pushes the local chat and IM chat windows to the right. If i put the mini map to the right corner then i end up having to move it every time i open the slide bar. It’s just to big really
3. To many Chat Boxes. I want to reduce the amount of screen space used by tabbing the Local chat into the same box as the IM chat, it seems stupid that i have to have a separate local chat box open with the IM box open. They end up taking up far more screen space than they need to.
4. The Slide Bar. Ok i liked it, but it’s so not working right yet. For one thing it opens up behind my chat boxes/mini map, which means i have to move all my open chats out of the way before i can use the inventory. After a while this get REALLY annoying. Perhaps it would not be so bad if i had LESS CHAT BOXES OPEN. But it does mean you cant use the right side of the screen for positioning chat boxes or mini maps because its reserved for the Slide Bar.
5. Media Controls. Used to have controls for playing video and sound. Perhaps with the addition of shared media they dont think the video play button is needed.
6. Online Friends. I used to get a message in my chatlog when friends came online or offline. Now i get a notification, but it does not say it in the chatlog. So its less easy to tell if a friend just went offline.

This is only the start of the new viewer which they call TRANSITION between viewers. Later they plan to add social networking cliches that you probably see on Avatars United as well as more new features including Mesh import (basically Super Sculpty Prims?). Also they will tackle the way the inventory works, becos lets face it, with the Slide bar not being detachable there is no easy way to sort through your inventory.

A lot of people have had a quick look at Viewer 2.0 and gone AGGHHH!!!!!! GET IT AWAY!!!!!!. Thats ok, there is plenty to be scared about, it is very different to use. I think it may take me an extra 30 minutes to do things as i clumsily make my way around the unfamiliar UI, grumbling every time something is not where it should be. But i have to get used to it, and keep using it so i can get back up to speed, because it is better and everyone knows it. The backlash from a large part of the resident community reminded me of this video, and i think it explains what really is about to happen here in Second Life.

I reccommend everyone try out the viewer 2.0 at least once a week.