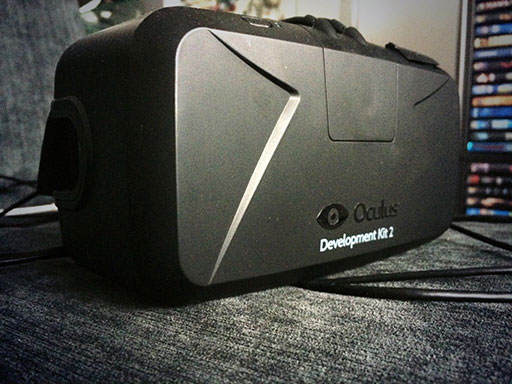 Arrival of the DK2.

So my DK2 arrived just before i was gonna head out the door for a weeks holiday. I thought maybe i can quickly set it up for a half hour play…. but no, the DK2 was not plug n play. It came up with some error where the config could not find the device. So i went on holiday disappointed.

When i arrived home of course i immediately went back to seeing what i needed to fix in order to use the DK2. Turns out the problem was because i am a Mac user… oh that old chestnut. The DK2 uses the SDK4 and at that point there was no SDK4 for the Mac or Linux Platforms.

A month later SDK4.1 arrives with Mac support. HAZZAH!?…right?… well… this is where things start to get really frustrating.. or concerning.

It’s my own fault?

FacebOculus have stated from the start that the DK2 is for DEVELOPERS ONLY. While I’m not a developer in a code monkee sense, i do plan to use the oculus to explore creative developments in Second Life and High Fidelity Virtual Worlds. But the DK2 really is still an experimental Kit with bugs and serious compatibility issues with OSX and Linux.

When the 4.1 Update finally arrived, the Headset was recognised but a new weird thing occurred. If you read other articles from DK2 users you will hear about how the DK2 displays at a 90 degree angle.

The reason for this according discussion on the FacebOculus developer forums, is because the DK2 uses a rather basic off the shelf smart phone display which is built to be seen in portrait. In the Oculus this display is rotated to landscape and when connected to a computer using a ’DirectHMD’ mode, the content is rotated to Landscape.

The problem is the DirectHMD mode seems to be “pretty unstable, as well as pretty thinly tested”according to one developer.DirectHMD is also not available at all for the Mac.

Of course developers are fiddling with work arounds. You can get a Mac to ‘extend’ its display into the oculus, but you have to then set the Oculus’s extended display to rotate to landscape. But while you are able to finally view demos and games on the Mac in DK2, it comes at a very dramatic performance cost. While the DK2 picture quality is vastly improved over the DK1, , the frame rate and latency drops negating any point in upgrading from DK1.

But this is a development Kit so i can’t really complain, it should get better,  though i was expecting the Oculus to have come a lot further along by now.

Who Loves Oculus and who does Oculus Love?

I can’t use my DK2, its sat in the corner waiting for an SDK thats more, i dunno… complete. Maybe FacebOculus is just concentrating on the PC gamers market to start with. I’ve already seen Developers tell others to invest in a PC instead of using Mac… yeh, same old same old crap.

I didn’t think the Pc Gaming community was that big anymore when compared to console gaming and mobile gaming?

Anyway, I’m initially disappointed with the DK2 because I’m kid who can’t get his new toy working. Hopefully updates to the SDK with improve the situation, but at this stage, it just makes me wonder how many years away we still are from getting a consumer version.