A second Signal was intercepted using the Goony MultiDimensional Signal Transceiver. The Signal is of a conversation between two persons, Glorb and a Grand Master. The conversation warned of an imminent attack from Gelatinous Cubes so the Goonies prepared themselves by having a mini boat race around Goony Island.

Listen the the Second Signal HERE

Suddenly without warning Nemo beach was over run by giant green gloopy cubes. The call was made and the Goonies descended on the beach with all manner of weapons in hand. Rockets, fire, Slingshots, Pies, Swords, Flowers, everything was used in an effort to beat back the Gelatinous Cubes. 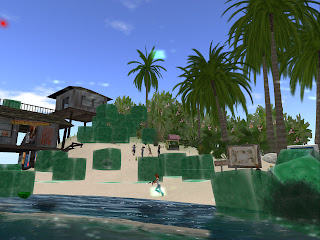 Finally one by one the Cubes were destroyed and Goony Island was safe once more.
But what evil plans are yet to come from the menace beneath!???

3 thoughts on “Chapter 2 – Attack of the Gelatinous Cubes!”