Finally dusted off the OculusVR for a quick run about with the Official Linden Lab Beta for OculusVR support.

Remember this is a Beta so anything i say here may change in future especially as Oculus and VR itself is still developing. For instance there are moments when you turn your head at an angle and the oculus does not do this so you feel a bit odd. This is due to the Oculus not allowing for tracking the orientation of the head. But solution to this has already been unveiled in the Crystal Cove Prototype which goes to show that commenting on the performance and use of these things could be irrelevant a month later.

I had used the first Alpha of the CntrlAltStudio Oculus Viewer and have hoped that the LL viewer would address some issues i found with that. Obviously CntrlAltStudio has since added their own improvements but since there is no Mac version of those later builds, i don’t know wether my issues were addressed.

Using the viewer is simple if you know how the viewer works. It loads up just as a normal LL Viewer, Via the ME menu you can toggle the Head Mounted Display Mode and if your OculusVR is plugged in your monitor will go black. Im used to the Oculus demos being mirrored on monitor so i can see what my friends are seeing, or to record examples. As such you will not see any Snapshots or Videos of what went on. I don’t know if this is a mac issue or something LL decided to keep FPS, i don’t know yet.

Putting on the OculusVR and you will find yourself looking down at your avatar with the UI menus and HUDs wrapped around your vision. I had to really look up to see the top menu. The Arrow Cursor is fun, it pops up in front of the wraparound Menu items and zooms off into the distance to click distant objects. It really adds to the depth of the 3d environment. I found the default wraparound too close my face but its easily adjustable via preferences to be further away.

It is a really awesome feeling to be stood in places you have visited everyday in Second Life. In a way it feels like you’ve watched the movie everyday for five years and now it feels like you are finally standing at where it was filmed. Objects that constantly move such as a giant water wheel, your eyes focus on one part and your head moves to follow its rotation up and around. The sense of scale is amplified by the effort you have to make to see it all by the craning of your neck. Leaning over edges of cliffs and buildings you get that depth, you feel the distance and as you leap off you get that super human rush.

They have retrofitted the Oculus view to third person camera and mouse look camera which work as you would hope, but they also added a totally new third camera which they are calling ‘First Person’. This is the best mode for doing stuff in SL with a head mounted display (HMD).

The best thing i found when trying this beta was flying my battle balloons. In old MouseLook flying a vehicle was limiting. With the new FirstPerson mode, you can fly vehicles as you would in third person but from the view of mouse look and its really fun!.

The viewer ran pretty much the same speed as the none Oculus Viewer, but i am using a Mac which never seems to run at full power anyways. I have Advanced Lighting switched on with no shadows and everything looked great even in New Babbage. In fact i was surprised to see that HMD does not work unless you have advanced lighting enabled. 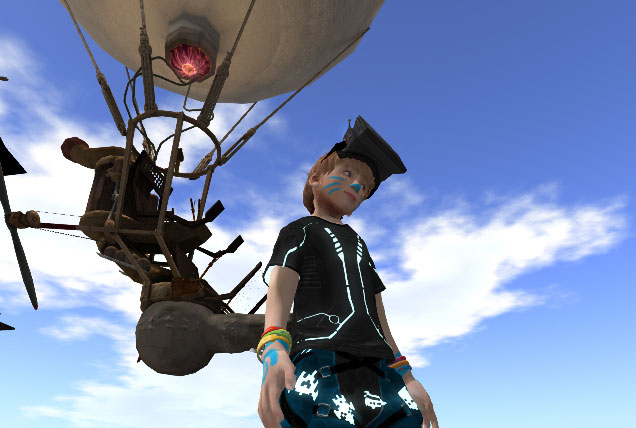 There were some issues but ill only discuss a few. Keyboards are to the OculusVR what a VHS video player is to new 4k Tvs. They simply hinder the experience. At one point i looked down in my view for the keyboard to type, an intuitive response that isn’t catered for anywhere yet. Someone somewhere at some point will have to create a arm mounted keyboard packed with sensors that map to a keyboard in your virtual world view.

There is a need i feel for visible clickable short cuts. I guess i could invest in a programmable mouse for things like removing UI, toggling HMD, swapping through viewing modes, could these not be buttons i can click in the view?  i think 3D Connexion have a smart pro 3D mouse that allow for shortcuts. The Oculus viewer does sort of support the 3DSpaceNavigator. I use the 3D mouse ALL the time, spending most of my inworld time disconnected from my avatar. If you do use the 3D mouse with the oculus you will find that it messes with your vertical viewing direction.

At first i wanted to see my avatar while in mouse look, so when i looked down i could see my feet, yeah! But i soon discovered that my AO’s animations would spin around while my view stayed fixed leading to some scary neck twisting action.

Although the Piloting part of my Battle Balloon game worked better, the Gunner part of my Battle Balloons which uses mouse look to fire cannons in the direction you look was kinda broken by the rift. HMD Mouse Look uses a technique where your avatar will turn 360 with the slightest turn of your head. This is so HMD users can turn around without having to actually turn around, but to me it’s just confusing and not natural. If you look down you can quickly get into a spiny mess of disorientation, especially if you are trying to look below to shoot at oncoming Battle Balloons. I’ve thought a few times before that perhaps LL could introduce an ‘action’ button but thats a subject for another blog post me thinks.

I need to take it to Jo Yardley’s scaled showcase because you definitely take more notice of the scale of your surroundings. I also plan to use the OculusVR during my DJ show this tuesday to see how its like actually being on the dance floor. In all the UI solution and the new First Person Mode are great, and its given me some stuff to think about when building my next experience in SL. I’ve had a kid avatar since i first arrived in SL, but only now am i seeing the world from kids perspective and its quite funny.

5 thoughts on “Taking the VR Beta Viewer for a spin”