So Halloween is now long gone and tv adverts are in full festive overkill leading up to Capitalist day. THE WELL experience will be up for two more weeks if you would like to check it out again and drag friends along with you.

While the well was received much better than last year, troubles with the destination guide had a dramatic effect on the amount of visitors it had. In a way this may have meant better experiences for those who visited but it does highlight an unfair aspect of discovery in SL.

Due to the ease of use this year compared to last year, visits seemed to convert into players a lot more even though the price for entrance was L$100 compared to L$20 last year.

Last year THE WELL had in comparison 5100 visits. This years THE WELL 2 reached just 1325 visits in the same time frame. This is possibly due to the rather rocky visibility on Destination guide.

I rushed through nights to get the experience done before Halloween night and achieved this. I then sent it to be ‘considered’ for the destinations guide. It took five days before it was finally added, unfortunately after Halloween, but by use of SLfeed, twitter and friends, there had already been some interest. By the time THE WELL2 was put in the DG visits had slowed to just 17 a day before shooting up to 67 then hitting this years record of 108 which is meagre compared to last years record of 556.

The problem was that even though it had been added to Destination Guide it had mysteriously been placed down in the rank of places under destinations that had already been on the DG for weeks. It only took a couple days before THE WELL dropped off the landing zone of the DG meaning you had to browse the categories to find it.

A week later the experience was moved from ‘Haunted’ to ‘Rides & Mazes’ where the visits dropped to that comparable with promoting just through SLfeed and Twitter. In fact in the last three days visits have risen to figures close to when it was first placed on the DG. The only thing i had done was re-announce via SLfeed and twitter that there was still two weeks before i remove the experience and release a new video promo.

The destination guide is a very powerful tool for bringing visitors to your destination or experience, but how its used to promote your destination is at the mercy of the editor. Some are saying THE WELL was unfairly demoted while other believe there simply is to much to be curated and promoted these days.

I don’t think i will be doing another THE WELL next year. Thats not to say those who visited THE WELL didn’t have a great time, here are just a selection of quotes…

The experience was amazing and so much fun. I’ve never experienced anything like it in SL, great job!!! My only criticism is that the story wasn’t too clear, I didn’t understand the choices or rather, how to make the right choice. I’m looking to more fun experiences.

it was amazing lil hard at first However i had a good time it being my first time here hi5 to me giggles i sure did enjoyed it.

Design wise it was great, good use of normal and specular maps. However it was rather short, the sanity meter didnt see much use, as the little shadows move quite slowly. The story is rather confusing/non existing. All in all a nice little adventure with good visuals.

Loki I must admit your monster creeped me out.. again.. this year. As ii noticed it was not necesary to click the stuff for the experience, i disabled the UI (ctrl alt f1) witch made the game even more immersive!

Really enjoyed it I’d have to say I did not experience anything quite like it. I saw the extra textures and lighting, but while roaming the main hallways had to turn that off to keep my sanity. Two of the choices I was not quite sure why they were the correct ones. The voice acting was top notch as was the whole experience. Excellent job!

Just freaking amazing, Loki. You you outdid yourself again. Worth far more than the entrance fee just for the experience. Admittedly I had to keep turning off Advanced Lighting so I could walk like a sober person, but I’d turn it on when I was safe to see the amazing textures. At some point I gave up trying to memorize routes to get back to rooms. A few token way markers might be nice. Certainly a 9.99 out of 10 stars. Thanks, Loki!

As always i listen to what people say. How people react and experience THE WELL is as much interesting as learning how to script and build this stuff. Some people zipped through the caves in just minutes saying “dude this was to queasy and quick” while others ended up lost down there for hours saying “dude its to hard!”, which just goes to show the extremes to which users experience the same things. The same goes for the story, some people said “Dude i total understood the story it is SOOO deep” while others were like “Dude there was no story!”.

I especially liked how people sought out meanings to rationalise their choices. The choices were random, one takes you forward to the inevitable end, one takes you a step back and a third choice would send you on a parallel course. It was possible that you could choose wrong for ever and be lost down the well for ever. While some claimed to understand this metaphorical hokum others seemed to feel cheated of narrative. And i bet they did not like Prometheus either :-p In the end I’m the story teller and its up to me what you know is going on 🙂

There were some great Blog Posts promoting it for me with which i give heart felt thanks.

If you haven’t visited THE WELL yet, you have two more weeks to do so. Thank you everyone who enjoyed THE WELL and took the time to message me about it. 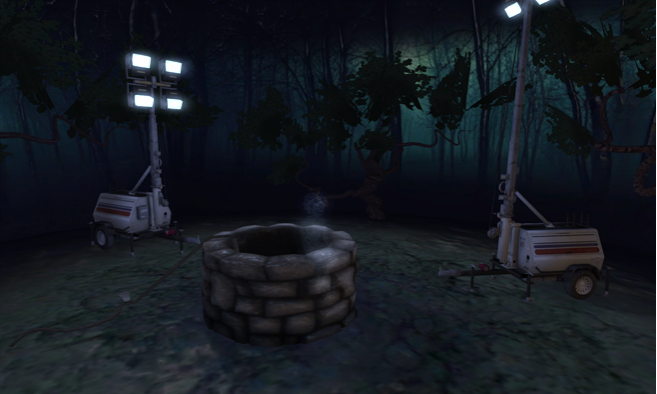 The sequel to last year’s experiment in fear returns in The Well: Sollicitus. A team of scientists investigate a strange well to uncover what happened to the young boy who vanished and the rescue team that went missing searching for him. Get the HUD and try to complete the labyrinth of tunnels, avoiding gruesome monsters and terrifying shadows.