Was supposed to be working on new clothes today but something arrived in the post to change that plan. 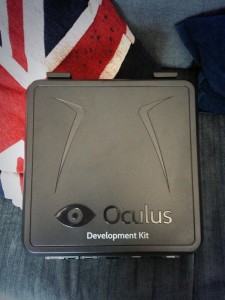 Im a virtual world geek, not really a developer. Maybe ill learn some use for oculus while trying to apply my skills learnt for the SL Platform on Unity3D. It’s fine that Linden Lab are working on making SL compatible with Oculus, but i figured i better try it out so i can see how this is going to appear & feel plus get some ideas.

Its light, so much lighter than i expected and yet the bulk of the rift is plastic so i can see how they might make it even lighter for the consumer version. I wore my thin framed glasses during use and i expect when its time for new frames ill get even thinner ones and call them my oculus frames. The view still felt a bit out of focus, like how you would look through binoculars, i kind of wanted to adjust the focus but there is no such option on the device that I’m aware of. It was easy to hook up to my iMac, it really is a plug and play device.

When i first put on the headset in a cartoon mario style world i expected eye popping 3D to blow me away but was kinda disappointed at how ordinary things felt. Then a butterfly flew past my head and i turned to watch it fly by. This natural response to subconsciously turn my head and track the butterfly is the key to why Oculus is so special. It really does give you a sense of being in a place surrounded by digital objects.

I also tried out Half Life2. I found it odd that even with the low rez display i was noticing things i had not done so before. A boot on the floor, things just laying about, my eye would just catch site of something and i’d turn to focus on it in a way i had not done before. I got a greater feeling of the environment.

I get motion sick quite easy, I’m not the traveling type and prefer to walk. I got a bit woosey quite quickly with Oculus and i put it down to unaccustomed movement and controls. As i look around in a very natural way my brain is then ripped apart by old style First Person controls.

My theory is that When we sit in front of the computer and play first person games our subconscious is quite happy in SIT mode and our awareness of the world and whats on screen all comes from that mode. In Oculus the subconscious is in sit mode but then starts thinking “hang on we are in stand mode or running, or .. wait what, where are we ARGH ARGHHHHH! ” and you start feeling woosey.

The Oculus is here, its shown whats possible and its given developers a huge problem to fix. Intuitive User Interfacing for truly immersive Virtual Environments. Pushing a button on a keyboard isn’t gonna fool the subconscious into thinking we are walking. So the race is on to come up with intuitive interfacing.

As for Second Life, i really can not wait to get an Oculus Viewer to try out on my island. To stand on Nemo beach and look out across to hawkings bay then look up at the lighthouse. It will undoubtably uncover how well i’ve scaled everything, will everything  look small or will it look like I’ve entered land of the giants?

There is a lot of speculation about how Oculus will be utilised in SL. Will it be more suited to short controlled bursts of experience in SL, or will it get adopted as a more productive building tool? As i move more and more to Blender and Photoshop for making SL content the actual inworld building element has changed to one of a more of a landscape artist or decorator rather than a builder. With this in mind perhaps Oculus could be a viable way to build a world.

I’ve already got two projects which i’d like to experiment with Oculus. One is T H E  W E L L 2 a horror experience that aims to really frighten users. The Other is a Steampunk Airship Battle Game.

Its exciting times for a Virtual Reality geek.

So i’ve been playing with Oculus a bit more and something very profound occurred to me. In Half Life 2 i found that when i stood in front of an NPC character i had a real sense of engagement with a person. The Oculus strips away the sense or feeling of watching through a screen. First person games have this ‘observer’ quality to them, you feel like you are watching the events unfold through a shoulder mounted camera. I don’t think i need to explain how this extra sense of engaging with another avatar could effect Second Life.

So i had a good mess around with the Oculus nuts and bolts and found the reason why things appeared out of Focus on some demos and not on others were because of screen resolution. My fault for not reading the notes. Oculus also comes with a handy configuration software tools. While there are two added lenses for short sited people, i still found it better to wear my glasses with the A cups.

I also found a video on youtube created to be viewed in 3D with the oculus. Now all we need is 360 degree video cameras and a web service to host them.