Im starting to see a pattern in how i get excited about new features in SL. The fun and excitement comes from the announcement then the downloading of the development viewers to test on the Beta Grid. The blogging about how it will add so much to Second Life once they iron out the bugs.

By the time the features come out on main grid or in the release viewer no one gives much of a crap because the features have no effect on how they use Second Life. Only the super content creating geeks get giddy over the new tech.

So it was with Pathfinding, this amazing bit of tech used for more dynamic movement of NPC’s or AI’s or bag guys,. Before Pathfinding i had been using sensor scripting with ‘move to target’ commands so my goblins would sense a user, target them and move to that target, then sense again and move to new target.

Pathfinding is amazing, it really is great but now that it’s out on the grid i cant find any use for it. Or should that be i can find uses for bugs are stopping me from using it.

My first test of pathfinding was rats using an animation technique called Alpha Flipping. This technique allows for smooth animations by flipping through the faces of an object. The test Rats on the beta grid worked really well and i showcased them in a video.

My first proper main grid use of Pathfinding was to be the Cheese fairy quest. I had the cheese fairy woddle about and wonder freely but i started to notice that his appearance was getting stuck or he would disappear entirely. Investigating more lead to the belief that Pathfinding was having some kind of side effect with the alpha flipping technique. I filed a bug report on the Jira and a Linden investigated but eventually i got snowed under with other projects.

Months later and a new project required new NPC monsters so again i looked at pathfinding. This time they were big crazy rabbits that pounced at you when they got close. The animation looked awesome. But this time i discovered that when the animated rabbits had pathfinding scripts put in them they would fail to rez at all. More investigating revealed the object wasn’t being rezzed at all by the viewer. In the mean time i decided to remove the animated aspect of the rabbits in order to keep the pathfinding. Filed another bug report, a linden came to investigate and then i got sidetracked with other projects.

So a month later and i’m now working on new NPC monsters for the latest upgrade to my weapons system. These little critters are also animated and like the rabbits fail to rezz so im probably going to not use pathfinding this time. I want to, i find the movement and tracking to be really challenging for users and take things a step forward to being more like proper gaming. But i want my NPCs to look lively and engaging which i cant get with pathfinding anymore. 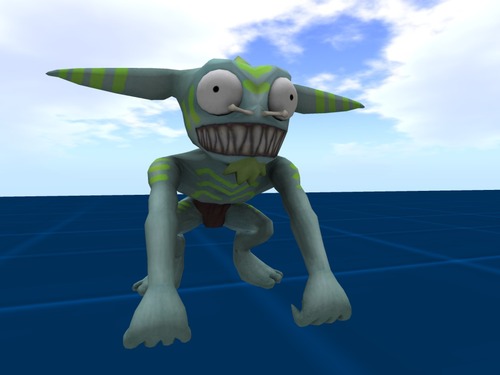 Its rare to find pathfinder being used anywhere, i think the best example i saw was of cockroaches scurrying around on the ground. Im sure at some point ill find a good use for dynamically moving static objects

Maybe LL are working on fixing this issue, maybe the issue is related to the big problem of objects not rezzing, which is in turn probably related to shining project,  in which case id expect it to be fixed  eventually. All i know is that i cant do what i did when testing in the Beta stage and that ultimately SUCKS because they did a lot of work on this feature and i wanted to move forward.

Of course the whole thing would be a mute point if only LL implemented a way to animate a rigged object. 😛