So yeah, being a Kid in SL aint easy. My friend Austin and his mates got asked to stay away from a beach becos they had a complaint from an irrationalist. So many adults in here wonna kick me and me mates off their sims just cos we are Kid AV’s. The one thing thats invading Second Life is not Christianity, not saddams regime, not al kieida or communism, not christmas, not the american dream, not hollywood and definitly not Georges Bush. So what is it??.. Its Irrationalisim, and with it, its best mate Ignorance. 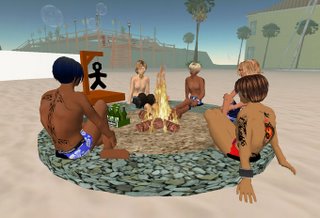 Its as if some people think the only reason to come into Second Life is to have Cybersex and to see kids walking about the place is EVIL and abusive. Some have even gone as far as start campaigns to have Linden change SL so that we cant live out our second childhoods. There have even been News reporters going around asking wrong questions from the wrong people looking for the wrong things to bigup their yawning excuses for journalisim.
And thats the problem with second life, people come in here with their tv generated ideas of what black and white should be, when most well travelled internet surfing dude will know that once yu get passed the faces of AOL, MSN and yahoo, you end up in a world of many shades. irrationally you can look at a swastika AS EVIL AHHHGGHHHH WE MUST NOT HAVE IT ON ANYTHING IN SECOND LIFE!!!!! rationally you would know that its just a symbol, one thats been used for hundreds of yeahs for lots of different reasons and is still used by sum cultures not for EVILL ARGHHHH!!!!!. So why arnt people being rational about Kid AV’s?
well the problem lays with them actually, not the Kid AV, and its not really their fault. In a way its the responsability of the KID AV to watch what they are doing and not to disturb anyone that might not be used to the idea. Its not typical in western culture to see two kids engaged in sexual acts. but it does happen…. if yur any typical person and think back to yur young life yu’ll remember what it was like the first time, how fun it seemed, how embarresing. So here we are at another POINT to make….. Who are the AV kids and why do they relive childhood in SL… I do not hear anyone asking this!!!
Its irrationaly asumed Kid AVs are sex fiends and i wont go as far as to say noone is playing a KID AV to live out fantasies they have. In SL everything is played out, yur worst nightmares.
Ok here we are at the final point to make. Linden wont take away our freedom to be kids in SL, to do that would mean to take away freedom from the WHOLE Second Life community, becos they wont be alowed to stop there. The pressure from irrationalists will grow to envelope Beastiality and the furry communities, the re enactment of KILLING each other will have to go, surely the shooting games promote KILLING. Goran, slavery must go, MY GOD i thought America had abolished all forms of slavery……. woooooaahhhhhhhhh hold on, let me get my rational thinking cap back on… its not real, none of it is…. to ban anything in SL created by its residents is an attack on that well used american phrase “freedom of speech”